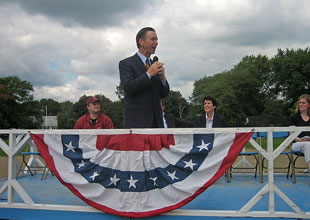 Rep. Stephen Lynch (D-Mass), who switched from “yes” to “no” on the health reform bill, is insisting that his vote will not kill the legislation, noting that the House Democrats have the votes to pass the measure this weekend without his support. He also says that during a meeting with President Barack Obama on Thursday, the president failed to win him over with a promise to make the reform package more progressive down the road.

Lynch slams the legislation as “a poor bill” that would continue the worst elements of the status quo. In explaining his switch, Lynch cites the absence of a public option, the failure to repeal the anti-trust exemption for insurance companies, and the inclusion of the excise tax on high-end insurance plans. (These are some of the key differences between the final bill and the House version, which he had supported.) “There’s a difference between compromise and surrender, and this bill is surrender,” Lynch tells Mother Jones. “It’s a surrender to the insurance companies, it’s a surrender to the pharmaceutical companies.”

But Lynch doesn’t see his “no” vote as a bill-killer,” saying it’s very likely to pass during Sunday’s scheduled vote: “I don’t think they would be calling the bill up on Sunday if they  didn’t have the votes. if I had a bet on it, yeah, I’d probably bet that it would pass.”

On Thursday, Lynch met with Obama, who made a personal appeal for his vote. During the meeting, according to Lynch, Obama said that he’d consider trying to reinsert some of the progressive provisions left out of the final package. “He said we can’t do it this year, but next year he’d be willing to consider inserting a public option,” Lynch says. “I talked about the repeal of the anti-trust exemption—he said he would try to do that down the road.” Lynch, however, remained unconvinced.

In opposing the bill from the left, Lynch is increasingly standing alone, as many liberal hold-outs have decided to support the reform bill during the crawl to the finish line. One of the most prominent progressive critics of the bill, Rep. Dennis Kucinich (D-Ohio), switched from a “no” to a “yes” vote this week, citing his concern that the failure of the bill would make future reform more difficult and would diminish Obama’s ability to govern.

Lynch notes that despite his opposition to the bill, he would not support repeal of the legislation, should it pass. (Repeal has become the new rallying cry for the Republican opposition.) In fact, he says he’d like to play a leading role in adding progressive changes to the legislation: “You’ve got to suck it up and move on. You’ve got to fix this thing as quickly as possible.” It’s unclear, though, if the House Democrat leadership would welcome his involvement in any such effort.