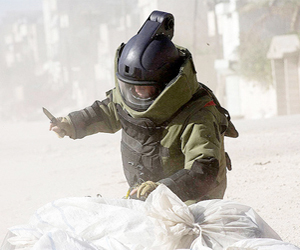 It’s hard not to gush about Hurt Locker‘s cleanup of the Academy Awards last night. The film, which details the life of an explosive ordnance disposal team in Iraq, was itself an insurgent engaged in an asymmetric war with a high-cost, high-revenue, CGI popcorn thriller (we all know who that is). But besides earning the first Oscar honors for a female director, and being the lowest-grossing “best picture” winner ever, Hurt Locker could be still more groundbreaking: It could pull complex, nuanced war stories out of the art houses and back into favor with commercial audiences and producers.

That’s no small feat. Just a few years ago, Michael Moore was being booed off the stage for giving his not-so-nuanced take on the freshly minted Iraq campaign. Since then, a bevy of Iraq-related films (In the Valley of Elah, Redacted, Brothers et al) have been relegated to the margins of American culture, deemed too violent, too political, or just too damned in-your-face at a time when the American public would like to forget its ongoing expeditionary forays. (Last year, as a PR person for the US military in Iraq, I felt like I was Sisyphus rolling a boulder uphill just trying to get any mention of the war in the mainstream media.) But today, Hurt Locker has penetrated the American pop psyche like no war film since Saving Private Ryan—albeit in a completely different way, which is fitting for a movie that chronicles a completely different war, waged by a completely different America.

To be fair, Hurt Locker, too, doesn’t satisfy the “been there, done that” war grunt’s attitude—a hunger for accuracy or patriotic fervor that the political right has always used to torpedo war films deemed lacking in the John Wayne rah-rah factor. Some of the movie’s less realistic points—like US soldiers roaming the streets of Baghdad alone after dark—are the subject of fair ridicule, and “going all Hurt Locker” has now entered the warfighter’s lexicon, referring to someone who’s being overly dramatic. (The conservative school of thought here, apparently, is that realism is the only mode appropriate to war drama—unless the reality is inglorious, in which case, contrived glory wins.)

But today, even some of the Iraq war’s biggest (and most laughable) proponents are praising Hurt Locker‘s triumph. Apparently, conservatives are now ready to brook some dialogue about war and art, and what their intersection can tell us about ourselves. They’re also calculating, I think, that more war references in popular culture will “bring the war home,” reminding the civilian public of what’s being done abroad in its name. For completely different reasons, I can only hope that they’re right.