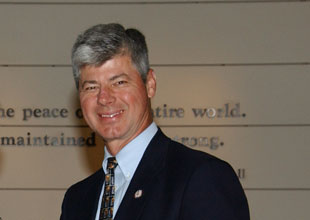 Update: Bart Stupak has announced that a deal over abortion funding has been reached, and that he and his allies will vote for health care reform. He says Democrats “are well past 216″—referring to the number of votes needed to pass the bill.  The White House also just emailed to reporters the executive order that was authored to address Stupak’s concerns that federal money would be used to fund abortions. Here’s the text.

Rep. Bart Stupak (D-Mich.), a longtime holdout over abortion provisions in the health care reform bill, will vote yes when the bill comes to the floor, MSNBC reported Sunday afternoon. But Fox News and CNN’s Dana Bash said “not so fast.” And Stupak himself appeared outside the House chamber around 2:30 p.m. to tell reporters, including our Suzy Khimm, that he’s still a “no.” Now Stupak has a press conference scheduled for 4 p.m. So the Bart Stupak show continues.

Stupak, a 58-year-old former state trooper, has spent months at the head of a bloc of anti-abortion Democrats, and has repeatedly threatened to scuttle the health care bill if his preferred abortion language does not appear in the final package. Knowing they’ll almost certainly need at least some of Stupak’s bloc to vote “yes,” President Barack Obama, House Speaker Nancy Pelosi, and other Dem leaders have been working feverishly to appease him. On Saturday, a last-ditch attempt to add Stupak’s language to the final bill via a little-used legislative maneuver fell victim to a combination of procedural difficulties and objections from Democrats who support abortion rights.

Late Saturday, Democratic leadership seemed to be focused on one last-ditch method to bring Stupak on board: an executive order from Obama that would clarify the bill’s abortion language. Stupak scheduled a press conference for Sunday morning, but later called it off; there were reports throughout that afternoon that he was nearing a deal to switch his vote and bring his faction with him. Several purported members of the bloc broke off from the pack; Marcy Kaptur of Ohio and Earl Pomeroy of North Dakota both said they would vote for the bill.

The National Review‘s Kathryn Jean Lopez has what she says is a preliminary version of the proposed text of Obama’s executive order. Remember, pro-choice Dems, including Rep. Diana Degette (D-Colo.) and Rep. Lynn Woolsey (D-Calif.), have endorsed the idea of an executive order clarifying the health care bill’s abortion language.

Lopez’s document may not be the genuine article, but it certainly seems plausible, given what we know. If the executive order looks anything like what Lopez has, Stupak would have to make a major compromise in order to accept it.

The Stupak bloc’s main demand is that people who receive tax credits to help pay for health insurance should not be able to buy policies that include abortion, unless they purchase a separate abortion “rider.” At no point in this entire saga has Stupak appeared willing to compromise on that point. (Critics say such a provision would eventually lead to all insurers dropping abortion coverage.) But if the final language of the executive order mirrors the Lopez document, Stupak will not have gotten what he wants. Nothing in the document suggests that it would meet that demand.

What happens next depends on what’s really going on with Stupak. There are two theories about this.

One is that Stupak loves the spotlight—his “principled stand” on abortion has certainly gotten him a lot of attention—but he doesn’t want to be responsible for killing the bill, and is willing to compromise at the last minute, accept some political cover from the White House, and vote “yes.” In this scenario, he’ll stay center-stage until the very end, but he won’t be blamed for killing (or almost killing) the bill.

The other option is that Stupak truly believes that his position on the use of the tax credits is the be-all and end-all. If that’s the case, it’s extremely unlikely that he’ll make a deal. Given the pro-choice caucus’ threats to vote against the bill if Stupak was able to add his amendment at the last minute, the Democratic leadership simply isn’t in a position to accommodate Stupak’s most important demand.

If the first theory is right, Dems have nothing to worry about. Stupak will hog the spotlight and come around at the eleventh hour (perhaps at the 4 p.m. press conference), likely bringing the rest of his bloc with him. If the second theory is right, Pelosi and Obama absolutely have to convince several more members of Stupak’s group to defect. Unless pro-choicers are willing to change their position, Dems can’t make a deal that will give Stupak everything he wants and still pass the bill.

So Stupak’s left with a choice. He could switch sides and admit that his key objection wasn’t such a big deal. Or he could hold firm, and watch health care reform stand or fall based on how many of his allies abandon him.