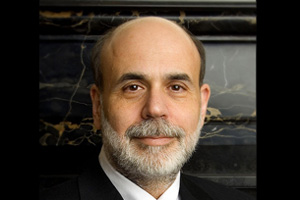 When Sen. Chris Dodd (D-Conn.) unveiled his long-awaited version of a Wall Street reform bill on Monday, two unlikely winners emerged: the Federal Reserve and its chairman, Ben Bernanke. The Fed, according to Dodd’s plan, would retain some of its most crucial regulatory powers, like overseeing the 40 or so big banks with more than $50 billion in assets. But it would also gain more regulatory muscle. A new consumer-protection agency would be housed within its walls, and the Fed chairman would sit on a council of regulators created to tackle banks that are too big or too interconnected to fail. Bernanke and his team would also be empowered to regulate large non-banking financial firms—like subprime mortgage companies—if the council of regulators deem that they threaten the economy. How did the Fed go from congressional punching bag to regulatory darling?

Both Bernanke and the Fed spent much of the winter like a boxer against the ropes, fielding blow after blow from critics. Bernanke endured a bruising renomination fight in the Senate in January, with various senators calling for his head. “Bernanke fiddled while our markets burned,” charged Sen. Richard Shelby (R-Ala.). Then revelations surfaced that the Fed’s leading branch in New York had in 2008 ordered AIG to hide its multibillion-dollar back-door bailout of banks like Goldman Sachs and Societe Generale. Dodd himself said in November that the Fed had done an “abysmal” job of regulating banks and protecting consumers from risky financial schemes like subprime mortgages. When Dodd released an early framework for financial reform that month, it stripped the Fed of many of its existing powers. Instead, Dodd proposed creating an independent consumer protection agency and a single, centralized super-regulator (PDF) to oversee banks.

But Bernanke fought back. Belying his detached mien, the bearded academic—who was named Time‘s man of the year in December—proved to be a persistent bureaucratic battler. In January, Bernanke sent a 12-page letter (PDF) to Dodd and Shelby, the Senate banking committee’s chair and ranking member, praising the Fed’s oversight expertise as “unmatched in government” and warning that its responsibilities would “be difficult and costly for another agency to replicate.” The next month, Bernanke cautioned the Senate banking committee that they’d be committing a “grave mistake” if they removed the Fed’s watchdog powers. Bernanke’s colleagues within the Federal Reserve—among them veteran policymaker Thomas Hoenig, president of the Kansas City Fed—also lobbied for retaining the Fed’s oversight of the nation’s banks.

Bernanke had backup from some powerful allies. President Obama has tacitly supported the Fed by defending Bernanke and his record, saying during Bernanke’s confirmation battle that the chairman “has my strongest support. I think he’s done a good job.” Treasury Secretary Tim Geithner has essentially done the same, warning lawmakers that failure to re-appoint Bernanke would send a “very troubling” sign to the economy.

The Fed’s biggest cheerleaders, however, were banks themselves and their legions of influence peddlers in Washington. In 2009 alone, the finance, insurance, and real estate sectors hired more than 2,600 lobbyists and spent a staggering $464 million. Powerful financial lobbyists have insisted that any new consumer-protection agency—which some groups like the American Bankers Association and the US Chamber of Commerce have outright opposed—should reside within the Fed, rather than serving as a standalone entity like the Environmental Protection Agency. “Regulation of the products should be connected to the regulation of the bank,” Scott Talbott, a top lobbyist for the Financial Services Roundtable, which represents big financial companies, told Bloomberg News this month.

Earlier this month, as the Senate’s financial reform talks hit a fever pitch, six of the most powerful financial associations sent a letter to the members of the banking committee urging them to keep bank oversight within the Fed. A day later, the Independent Community Bankers of America, which represents more than 5,000 smaller banks nationwide, lobbied the banking committee to install the Fed chairman as the leader of any new council of regulators.

As it stands, the big banks are on their way to getting the regulator they want. Critics say Wall Street threw its weight behind the Fed in an attempt to head off a much-needed crackdown on banks and other players, like subprime mortgage companies, that fueled the financial crisis. John Taylor, president and CEO of the National Community Reinvestment Coalition, argues that if a consumer-protection agency is installed within the Fed, there’s no way that it can be “independent,” as Dodd claims. “The notion that anything under the Fed’s purview can be independent is naïve,” Taylor says. “The idea that you put something under an agency that has a board of governors that are appointed for longer than presidents and many members of Congress serve—it’s simply unaccountable.”

Dodd’s new bill does try to make the Fed, in its enhanced new role, more transparent. The bill would add a member to the Fed’s Board of Governors to make recommendations on how the central bank oversees and regulates banks under its supervision. That new board member would also report to Congress semi-annually.

But these suggestions, at best, tilt at the issue of the Fed’s opaque, shadowy nature. And it’s worth remembering that Dodd’s proposal is about to run a daunting legislative gauntlet—the markup process next week, Senate-wide debate, and—if a bill passes—the merger of the Senate’s measure with the one already passed by the House. Senate Republicans are already lining up to whittle away at the bill’s consumer protection agency and other important provisions. If influential banks and their lobbyists have succeeded in transferring more power to Fed this early in the bout, you can bet they’ll be pushing for even more in the crucial negotiations to come.