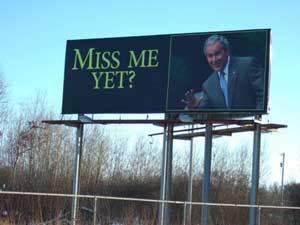 Last month, a photo of a billboard in Minnesota started circulating on conservative blogs. The billboard bears an image of George W. Bush next to the words “Miss Me Yet?” Oliver Willis (“Like Kryptonite to Stupid”) has already given the official lefty response to the billboard’s question. And  Minnesota Public Radio’s Bob Collins first reported the billboard’s origins:

Mary Teske, the general manager of Schubert & Hoey Outdoor Advertising reports, “The Bush Miss Me Yet? billboard was paid for by a group of small business owners who feel like Washington is against them. They wish to remain anonymous. They thought it was a fun way of getting out their message.”

Various people have stepped forward around the country to claim credit—the latest was a gentleman in upstate New York from what I can tell in his e-mail. But, it’s all local, folks.

Now one of my favorite conservative email lists, the Patriot Update, is trying to get in on the “Miss Me Yet?” action. Like its sister organization, the Patriot Depot, Patriot Update uses its email list to hawk conservative-themed books and memorabilia. Now the two groups have launched a petition campaign. Their goal is to get one million people to sign each of two letters—one saying that people “miss” former President George W. Bush, and another demanding that President Barack Obama stop “blaming Bush” for the country’s problems. They’ve even reserved a primo domain name—missmeyet.com. I’m reluctant to promote the effort, which will get a lot more people on the Patriot Update’s email list and probably make its owners a boatload of money on t-shirt and bumper sticker sales, but it’s funny in a sad sort of way, so whatever: 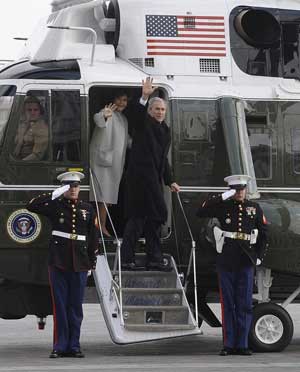 Should he stay or should he go? | US Military photo.The Patriot Depot & The Patriot Update are launching a national “Miss Me Yet?” campaign! There’s no doubt that President Bush was born in America and that he loves his country. During his presidency, Americans felt safe. Evil men feared his resolve. On the other hand, Barack Obama has been circling the globe and apologizing for the very nation that elected a minority to President. Plus, he’s going to let Bush’s tax cuts expire and raise even new taxes on the middle class to pay for his bankrupt social programs.

Americans who voted for “hope and change” are feeling buyer’s remorse. In honor of President George W. Bush and the conservative cause, we’re pleased to introduce the new “Miss Me Yet?” Bumper Sticker and T-shirt! We’re also asking you to sign a “We Miss You” Letter to President Bush and a “Stop Blaming Bush” Letter to Barack Obama. Click below to see the letters and sign your name at the bottom. Our goal is to deliver 1 million signatures to each man.

In the two-plus days since the petition launched, 7,500+ folks have decided they miss George W. Bush. Even if the petition organizers get to a million, that will still only represent a tiny portion of the population. But don’t count Bush nostalgia out. Because sadly, we already know how badly America misses W.: In December, 44 percent of voters polled by PPP said they’d prefer Bush to his successor. If those poll numbers are even close to right, there are a lot more than a million people who might be willing to sign the Patriot Update’s petition.