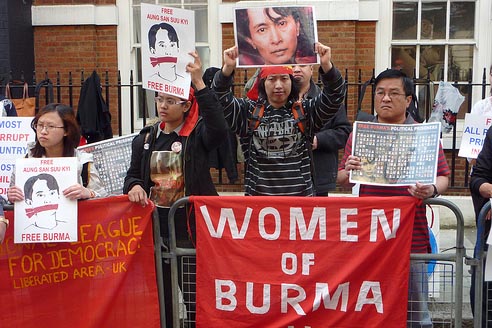 In a statement released by UN Secretary-General’s office, Ban Ki-moon said that he “reiterates his call for the release of all political prisoners and their free participation in the political process…These are essential steps for national reconciliation and democratic transition in Myanmar.” British ambassador Andrew Heyn said the decision was not a surprise and that Suu Kyi “should be released immediately, along with the other 2,000 and more prisoners of conscience.” For his part, French ambassador Jean-Pierre Lafosse said she was “the victim of a sham trial.”

In our current issue, Mother Jones human rights reporter Mac McClelland reports on her time palling around with so-called terrorists in Burma. Mac’s story explains in grotesque detail the daily life of many Burmese, and the particularly horrifying risks that people opposing the government expose themselves to every day:

If you’re one of those stragglers, and you’re a woman, or a girl five or older, prepare to be raped, most likely gang-raped, and there’s easily a one-in-four chance you’ll then be killed, possibly by being shot, possibly through your vagina, possibly after having your breasts hacked off. If you’re a man, maybe you’ll be hung by your wrists and burned alive. Maybe a soldier will drown you by filling a plastic bag with water and tying it over your head, or stretch you between two trees and use you as a hammock, or cut off your nose, pull out your eyes, and then stab you in both ears before killing you, or string you up by your shoulders and club you now and again for two weeks, or heat up slivers of bamboo and push them into your urethra, or tie a tight rope between your dick and your neck for a while before setting your genitals on fire, or whatever else hateful, armed men and underage boys might dream up when they have orders to torment, and nothing else to do.

Reading Mac’s story, it’s easy to understand why Aung San Suu Kyi would risk everything to hold the Burmese junta accountable for its actions against the country’s Karen ethnic minority. It also becomes glaringly clear that the international community needs to be much stronger in its political and economic opposition to the Burmese government if there’s any hope to end the treatment that Mac describes. Read the story for more on Aung San Suu Kyi, the Karen people, and the United States’ inadequate repudiation of Burmese leadership.