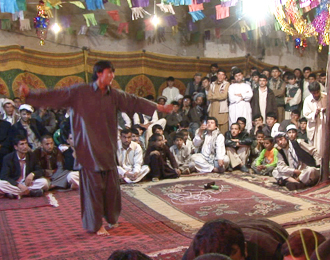 Say what you will about the Taliban. They’re small-minded, repressive, religious zealots who exert their power through fear and intimidation. But certain aspects of Afghan society can make the black turbans look downright righteous. Consider the ancient tradition of Bacha Bazi, which means “boy play.” Banned by the Taliban, this illicit activity is on the upswing across Afghanistan. The Guardian reported on it last fall, and on April 20, Frontline is airing a special report with the same title: The Dancing Boys of Afghanistan.

Here’s how the Frontline producers describe it:

Hundreds of boys, some as young as eleven, street orphans or boys bought from poor families by former warlords and powerful businessmen, are dressed in woman’s clothes, taught to sing and dance for the entertainment of male audiences, and then sold to the highest bidder or traded among the men for sex.

With remarkable access inside a Bacha Bazi ring operating in Northern Afghanistan, Najibullah Quraishi, an Afghan journalist, investigates this practice, still illegal under Afghan law, talking with the boys, their families, and their masters, exposing the sexual abuse and even murders of the boys, and documenting how Afghan authorities responsible for stopping these crimes are sometimes themselves complicit in the practice.

This brings to mind the rights of Afghan women, something American officials rarely talk about anymore—probably because they came to realize that the Taliban were Johnny-come-latelys when it came to sexual oppression. “Afghanistan is a rural nation, where 85 percent of people live in the countryside. And out there it’s very, very conservative, very tribal—almost medieval,” Khaled Hosseini, author of The Kite Runner, told me last year. “The way that people saw the Taliban treating women, unfortunately, is the way women have been treated in many parts of the country going back centuries. Kabul has always been sort of a cultural island.”

In our conversation, Hosseini was ambivalent as to whether America should—or even could—make an issue of women’s rights. As he put it:

Throughout the last century there were multiple attempts at giving women more autonomy, to change marriage laws, to abolish the practice of bride price and child marriage, and to enforce women to be involved in school. Every time, the reaction from the traditionalists was one of contempt and scorn and at times outright rebellion. At one point they called jihad on one of the Afghan kings. So we do have to be careful. I think the emancipation of women in Afghanistan has to come from inside, through Afghans themselves, gradually, over time. Otherwise, I think we’re back to suffering the same consequences that the communists in Afghanistan did in the ’80s, or the king earlier in the 20th century.

He’s probably right. All the same, some of these so-called traditions are enough to make you wonder just what it is we’re fighting for in Afghanistan—and for whom.

(The Frontline image above depicts an illegal dancing-boy party in Takhar, northern Afghanistan. The dancer, Abdullah, 13, is “owned” by a local businessman.)