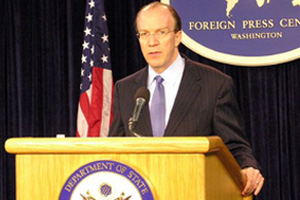 Whether he meant to or not, Stuart Bowen, the Special Inspector General for Iraq Reconstruction (SIGIR), just launched the opening volley in a bureaucratic turf war. On Monday, Bowen’s office released a report outlining the creation of a new government agency that would be responsible for managing, planning, and funding stability and reconstruction operations, like the ones that are ongoing in Iraq and Afghanistan and the aid effort that is ramping up in Haiti. Not surprisingly the lead players in these operations—namely the departments of state and defense—don’t like the idea of a new government entity bigfooting their terrain one bit.

Dubbed the US Office for Contingency Operations (USOCO), the proposed agency would gather under one roof a variety of government divisions that are currently spread among a multitude of agencies, each responsible for a piece of the puzzle but none for the whole picture. The idea, says Bowen, is to provide a single point of accountability for the billions of dollars being poured into reconstruction and stability efforts. In other words, one agency to blame when things go wrong—a concept that, at the very least, would save congressional committees the trouble of calling officials from multiple agencies to the mat to answer for reconstruction debacles.

Presently authority over reconstruction and stability programs—and the associated contracting—has been diffused among the State Department, the US Agency for International Development, the Pentagon, and others. The result, in many cases, has been unclear lines of authority, ad hoc or absent oversight, and overlapping or contradictory efforts. Given the litany of oversight lapses that have marred reconstruction efforts—resulting, among other things, in untold amounts of taxpayer money squandered or outright ripped off—shaking up the status quo would seem like a welcome and long overdue option. But ceding territory is never something government agencies take kindly to. And, if Bowen’s proposal threatens to become anything more than a well-read white paper, the firm, yet polite opposition of government officials could turn into a bureaucratic insurgency.

In a written response to Bowen’s plan, Undersecretary of Defense for Policy Michèle Flournoy remarked, “it’s not apparent how an additional organization solves the unity of command issues.” And besides, she added, Congress is “unlikely” to endorse the creation of a new agency “in today’s fiscally constrained environment.” Likewise, Deputy Secretary of State for Management and Resources Jacob Lew commented that the proposal is “an interesting one, but seems problematic on several fronts.”

Bowen, for his part, knew what he was getting into when he recommended the new agency. “Because it impinges upon existing ‘turf,’ USOCO, as a concept, will draw resistance,” the report detailing the new agency notes.

On Monday, Bowen defended his plan on Capitol Hill. “There is a system in place that’s not working,” he told the Commission on Wartime Contracting, which held a hearing on the coordination of reconstruction contracts in Iraq and Afghanistan. He acknowledged that USOCO had received a “mixed response”—and, in at least one case, none at all. Bowen said his office presented its proposal to the National Security Council, which, through its Policy Coordination Committee for Reconstruction and Stability Operations, plays a key role in the efforts Bowen wants to overhaul. “They didn’t respond,” he said.

Members of the contracting commission greeted Bowen’s recommendation with a mixture of praise and skepticism. “I consider this to be an important proposal,” said Dov Zakheim, the Pentagon’s former comptroller. Still, he cautioned, “You are getting into people’s turf.”

Grant Green, the undersecretary of state for management during the Bush administration’s first term, asked Bowen: “What makes you believe that this concept will work? In the end, a lot of this goes back to dollars. What makes you think that management will be any better when the two largest departments don’t support the concept?” Clark Kent Ervin, the Department of Homeland Security’s first Inspector General, said, “I’m always skeptical of an organizational response… when it seems like the fundamental problem is a lack of resources.”

The most unexpected criticism, however, came from Bowen’s Afghanistan counterpart, retired Major General Arnold Fields, the Special Inspector General for Afghanistan Reconstruction. Asked for his thoughts on Bowen’s proposal, Fields responded, “I don’t know if USOCO is the answer. It will mean that we will stand up another agency in effect.” But he agreed with Bowen that interagency coordination and oversight were sorely lacking. “We can no longer afford to do it the old fashioned way,” he said.

Whether or not USOCO becomes anything more than a controversial concept is largely in the hands of Congress, which would need to pass legislation in order to make it a reality. Bowen says his office is currently in discussions with the congressional foreign affairs and armed services committees. He’ll have another chance to pitch his proposal on Wednesday, when he testifies before a House subcommittee.

As Bowen pushes his plan, skeptical lawmakers and turf-conscious bureaucrats are not the only obstacles he may have to contend with. There are also the private sector players, the proverbial tip of the spear when it comes to implementing reconstruction and development projects, as well as training the Iraqi and Afghan security forces. “The contractors are the ones who benefit by balkanizing departments,” said commission member Charles Tiefer, a contracting expert at the University of Baltimore School of Law and a former House general counsel. “They like it that each department does its own contracting… Isn’t that what you’re up against, that contractors are going to resist?”