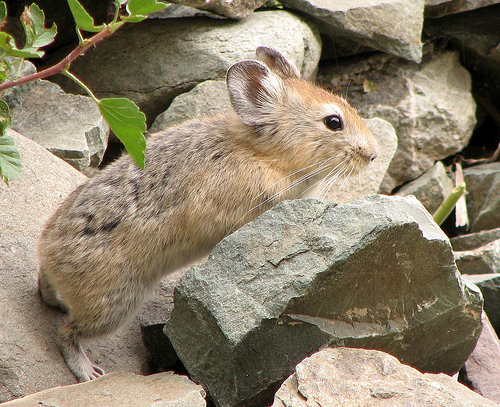 The American pika, a tiny mammal that lives in the mountains of the West, does not fare well in temperatures above 78 degrees. It also needs snowpack to stay warm in the winter, meaning that warming could also cause them to freeze to death. Either way, pikas are screwed in a warming world.

The pika is so imperiled that they should be listed as endangered, argued the Center for Biological Diversity and Earthjustice in petitioning the U.S. Fish and Wildlife Service for protection under the Endangered Species Act. But on Friday, Fish and Wildlife declined to list the pika, noting that though populations in the West are declining, those in other areas are not, meaning protection at this point is not warranted.

CBD and Earthjustice argue, however, that the warming temperatures will cause pikas to disappear in 80 percent of their habitats across the United States by the end of the century. “To conclude that this species is not threatened by climate change is an impossible gamble that we can’t afford,” said Greg Loarie, an attorney with Earthjustice.

A January 2010 article in the journal Bioscience notes, “There’s enough evidence to say that pikas are going to be among the first mammals to be adversely affected by climate change.”

Today’s decision was met with anger from those petitioning for an endangered listing. “This is a political decision that ignores science and the law,” said Shaye Wolf, a biologist at CBD, in a statement. “Scientific studies clearly show that the pika is disappearing from the American West due to climate change and needs the immediate protections of the Endangered Species Act to help prevent its extinction. The Interior Department has chosen to sit on its hands instead of taking meaningful action to protect our nation’s wildlife from climate change.”

Of course, the campaign to list the pika as endangered also has greater political motivations. Once a species is listed as endangered, the government is by law obligated to protect that species. Typical ESA protections would, for instance, make certain habitats of endangered species off limits for development. But in cases where the threat is global climate change caused by emissions from human activity, limiting that threat would require economy-wide action. It would create a greater legal impetus for limiting carbon dioxide emissions.

It’s very similar to the case for putting the polar bear on the endangered species list, as their lives are also threatened by the overarching problem of global warming. But the Department of Interior under Bush decided to list as merely “threatened”, which doesn’t have the same legal ramifications. Obama’s DOI Secretary, Ken Salazar, upheld that decision last year, arguing that the Endangered Species Act “is not the proper mechanism for controlling our nation’s carbon emissions.” Instead, what the polar bear, and now the pika, need is “comprehensive energy and climate strategy that curbs climate change and its impacts.” CBD, the Natural Resources Defense Council and Greenpeace are currently suing over the polar bear listing.

It is true that legislation from Congress is the best way to protect critters (including humans) from the impacts of climate change. But if nothing is done about climate soon, the Western pika and the polar bear may very well be toast.