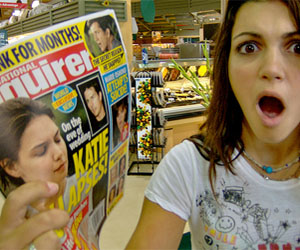 Traditional print jockeys now have to tussle with a supermarket tabloid for a Pulitzer Prize. This week, the administrators of daily journalism’s biggest exercise in self-congratulation reversed themselves and agreed to consider the National Enquirer in two Pulitzer categories for its reporting of the John Edwards infidelity/paternity imbroglio. The news was hailed by nontraditional journalists at outlets like the Huffington Post and Gawker, who lobbied mercilessly on the Enquirer‘s behalf (and who have no shortage of schadenfreude when it comes to the suffering of print giants like the New York Times and Washington Post).

There’s no question that the gossipy Enquirer—whose current issue leads with a washed-up pop diva’s health problems (“WHITNEY DYING!”) and a celebrity chef’s romantic woes (“PAULA DEEN DIVORCE SHOCKER!”)—ran with a story nobody else vetted when it exposed the dalliance between then–Sen. Edwards and staffer Rielle Hunter. And the paper deserves some recognition for being, in many ways, a tastemaker and trendsetter in the new media landscape. But the Enquirer‘s allies overlook the fact that its most questionable reporting practice was precisely what got it the “scoop” over other organizations—and what ultimately could lead the tabloid to get squeezed out of its own business.

The biggest strike against the Enquirer is its practice of “checkbook journalism”: It pays sources for their “BOMBSHELL” exclusives. That seems to have been the case with the tabloid’s Edwards affair coverage, too. When CNN’s Wolf Blitzer interviewed Enquirer editor David Perel about the story in 2008, he asked point blank:

Blitzer: Did you pay any sources in connection with this particular story involving John Edwards?

Perel: Wolf, we pay for photographs. We pay for information when it’s accurate. We have no problem doing that. And in this story, you know, whether we did or we didn’t, I’m not going to say. It doesn’t matter. You can assume we did. The thing that counts is the story has proven to be true and there is more to come.

Take Perel’s (dissembling) words at face value and assume there was some payola involved in the Edwards coverage. Then, all of a sudden, the Enquirer‘s “scoop” doesn’t look quite like the mammoth journalistic coup. Not because payola taints a story, but because it means the outlets with the most money and wherewithal will get the next scoop. In other words: If major networks and papers adopt the Edwards reporting model, won’t the Enquirer have just scooped itself out of the scoop business?