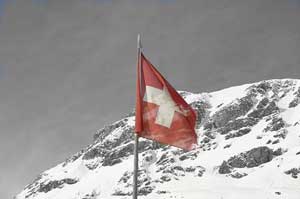 On Friday I explained why UBS was the only bank that offered to take a hit on its contracts with AIG during the government’s backdoor bailout of the ailing insurer. The reason? A looming US investigation of UBS that meant the Swiss banking behemoth was in no position to play hardball. In an interview this weekend, one of Switzerland’s justice ministers revealed the extent to which the fate of UBS—and the entire Swiss economy—is again in the hands of the American government.

As Mother Jones reported in November 2008, UBS helped wealthy Americans hide billions of dollars from the Internal Revenue Service (IRS) in violation of a 2001 agreement signed by the bank promising to identify and document customers with any US sources of income. The agreement was a major departure from historic Swiss banking secrecy laws—one which Swiss courts recently deemed to be illegal. The high court’s decision could also prevent UBS from fulfilling its plea deal with the US government, in which it promised to provide more names of US customers with illegal accounts. If UBS fails to live up to its side of the agreement, the bank could face the revocation of its license to operate in America. Now, Swiss Justice Minister Eveline Widmer-Schlumpf warns, “the Swiss economy and the job market would suffer on a major scale should UBS fail as a result of its license being revoked in the United States.”

If there ever was a bank that’s too big to fail, it’s UBS. It is the biggest bank in Switzerland and—before massive subprime mortgage write-downs and the attention of the IRS scared many of its wealthy customers away—it was the largest provider of high-net worth private banking services in the world. (In an ironic twist, Bank of America has since taken its wealth management crown.) UBS and its chief domestic competitor, Credit Suisse, are six times larger than Switzerland’s entire economy—an imbalance reminiscent of the failed banks that decimated the economy and currency of Iceland. Last year the $2 trillion balance sheet of UBS alone was roughly four times the size of the total Swiss output. As Investment International magazine observed at that time, “a UBS ‘blow up’ would be catastrophic to Switzerland’s financial stability.”

If the US government moves aggressively to force the release of the remaining 4,250 accounts promised in the settlement, it could trigger an implosion at UBS. Although the AIG rescue made clear that US regulators all too readily concede to the banking industry’s demands, UBS is in a uniquely awful position: It is a foreign owned bank that has clearly violated US law. That said, other Wall Street firms would likely argue that the collateral damage of another Lehman Brothers-type bankruptcy would be too much for the fragile economic recovery to withstand.

The terms of the plea agreement allow the Swiss bank some wiggle room. If at least 10,000 of its US clients came forward to the IRS during the tax amnesty period announced after the settlement, the government will drop the case. For now, however, the IRS is keeping quiet about how many of the nearly 15,000 US taxpayers that confessed to tax evasion were customers of UBS.

A bigger threat to UBS may be its own employees. The plea agreement it signed with the US was built around the testimony of one of its former bankers. Yesterday, the New York Times reported that an unidentified informant has offered to sell “German authorities details of 1,500 individuals who allegedly have untaxed income stashed away in Swiss bank accounts.” Although the outraged Swiss government is calling the data “stolen goods,” such sales are not without precedent. In 2008, Germany bought data on tax evaders hiding money in tiny Liechtenstein and last year France received insider information regarding 3,000 French account holders in a Swiss subsidiary of HSBC. Indeed, today German Chancellor Angela Merkel signaled her intention to go forward with the purchase, “We should aim to get hold of this data if it’s relevant.”

Banking secrecy laws may still be on the books in Switzerland, but every plea agreement a bank makes and every account information sale tears at the shroud surrounding Swiss banks. While all of this is bad news for UBS and a Swiss economy sustained by tax cheats, it is good news for honest taxpayers everywhere else.