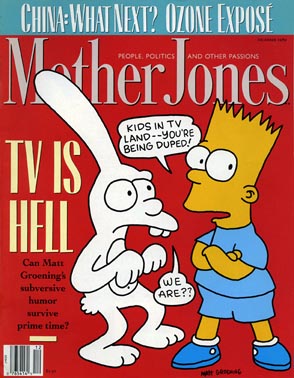 The Simpsons celebrated its 20th anniversary on network television last night, with an hour-long special “The Simpsons 20th Anniversary Special: In 3D! On Ice”, directed by documentary filmmaker Morgan Spurlock, who wrote, produced, directed, and starred in Super Size Me. It was an exploration of how The Simpsons has affected pop culture, along with the usual celebrity appearances, including a cameo by…Mother Jones magazine.

Back in 1989, Mother Jones art director Kerry Tremain was smart enough to realize that Matt Groening (rhymes with “complaining”) was going to be able to make the jump from his dark, smart, comics which explored how love, work, school, and childhood are hell, to the medium of network television. Groening’s Simpsons animations had appeared on the Tracy Ullman Show for two seasons, but whether the series would appeal to the larger network television audience was still up for grabs. Mother Jones ran a cover story about Groening’s work, which included an image drawn by Groening of Bart and Bongo (the worried child from the “Hell” series) on the cover. 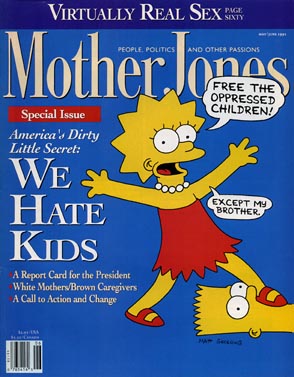 The cover previewed The Simpsons‘ tactic of entertaining while satirizing; it presented Bart and Bongo as approachable, lovable celebrities tweaking the jargon of revolution (Bart: “Kids in TV land—you’re being duped!”) with a punch line that undercut it (Bongo: “We Are?”)

A year and a half later, on the May/June 1991 cover, Tremain again used Groening artwork, this time to illustrate the cover story, “America’s Dirty Little Secret: We Hate Kids”. It worked similarly to the ’89 cover: Lisa Simpson exhorts the reader to “Free the Oppressed Children!”, adding, “Except my brother.” Bart is visible but silent; Lisa has her foot over his mouth.

Several months ago, the production company that’s putting the special together contacted us, asking for permission to use the ’91 cover in the show. We told them about the ’89 cover, and enthusiastically gave them permission to use both. Last night I gleefully watched a media montage of the Simpsons on the cover of Time, Rolling Stone, Playboy, and Mother Jones.