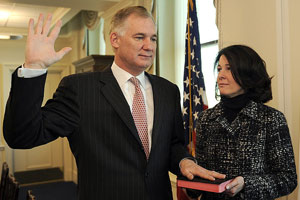 On Barack Obama’s first day in the White House, he introduced the toughest ethics rules of any recent president—rules he promised would “close the revolving door” between government and the corporate world. Maybe he should have invested in a really good dead bolt. One year into the administration, Obama’s picks for some key oversight posts are dogged by eerily familiar conflicts of interest.

When Obama nominated him to the No. 2 spot at the Pentagon, Lynn was the chief lobbyist for Raytheon, the nation’s fifth-largest defense contractor, so the president had to seek the very first waiver of his two-day-old lobbyist policy. As DOD’s comptroller during the Clinton administration, Lynn pushed to relax rules on contractor payments. Last year, when lawmakers proposed a “cost czar” to control Pentagon budget blowouts, Lynn first fought to kill the position, then pushed to ensure that the czar’s recommendations would not be mandatory—rendering the position virtually meaningless.

Scott O’Malia was a lobbyist for Mirant, an Enron-like energy-trading firm that was forced to pay California $500 million for bilking consumers in the 2001 energy crisis. He also pushed to weaken the CFTC—the energy-market regulator he’s now serving on. Obama didn’t seek out O’Malia—he was tapped by Senate minority leader Mitch McConnell, his one-time boss. Still, the president was entitled to ask for a more suitable nominee. Instead, O’Malia sailed to confirmation with barely a question about his background with Mirant.

Siddiqui is just the type of revolving-door careerist Obama promised to shun. While at the Clinton USDA, he fought efforts to label genetically modified food. Currently, he’s VP of science and regulation for the pesticide trade group CropLife (best known for criticizing Michelle Obama for not using pesticides in her vegetable garden); his new job will put him in charge of international agricultural policy, an area of great interest to CropLife. In its 2008 annual report, the group bragged of its “relentless” efforts to battle regulations “discriminatory to pesticides.”

The top federal nuclear official from 1998 to 2005, Magwood has been a cheerleader for nuclear power. He’s worked for reactor maker Westinghouse and has run two firms that advise companies on nuclear projects. Even before Obama took office, Magwood called on the incoming administration to spearhead a nuclear expansion—boosterism that critics say makes him ill-suited for an agency designed to determine the safety and viability of nuclear technology.

As Pennsylvania’s top mining regulator, Pizarchik developed policies for the “beneficial use of coal ash,” allowing the toxic substance to be dumped in unlined pits. A citizens’ group is planning to sue the federal government for allowing Pizarchik to turn a blind eye to “chronic and deliberate violations” of mining regulations. Yet a spokesman for Interior Secretary Ken Salazar says Pizarchik will “help move the department forward with coal production in an environmentally responsible way.”