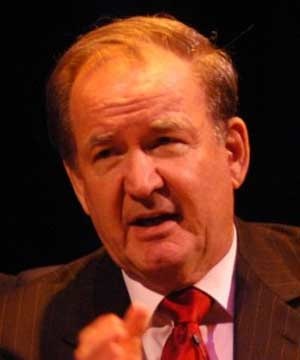 Pat Buchanan has been a political pugilist for decades—as a cable news warrior, a political candidate, and a counselor to power. This week the National Archives and the Nixon Presidential Library released a new batch of documents from the Nixon White House—including a 1971 White House memo presumably written by Buchanan proposing a secret plan to create pressure on the Democrats to nominate a black presidential or vice-presidential candidate. The point: to split the opposition party and weaken its ability to challenge Nixon in 1972. The memo has no author, but archivists believe it was the handiwork of Buchanan, then a political aide in the Nixon White House.

But in another White House memo released this week—one clearly authored by Buchanan in May 1970 and marked “confidential”—the combative adviser urged Nixon to be more like Franklin Delano Roosevelt than Dwight David Eisenhower, even though Nixon had served as veep for Ike. That is, Buchanan wanted Nixon to pound the administration’s foes. At the time, Buchanan had what now seems like an unusual, even quaint beef: Nixon, no stranger to underhanded tactics, was acting too much like a statesman, adopting a governing style in which he sometimes tried to work with those who disagreed with him and allowed Republicans with other opinions to serve in his administration. Buchanan was trying to nudge Nixon in a different direction—to adopt the no-holds-barred political style that has become all too familiar in the decades since.

Buchanan wrote the 13-page memo to Nixon two and a half weeks after the Kent State shootings—during which Ohio National Guardsmen fired on student demonstrators, killing four of them—and Buchanan explained that this memo contained his “reflections from bedside after a fortnight of reading the Post and Times news summaries and watching the networks.” Rather impertinently for a 31-year-old staffer, Buchanan bluntly stated that Nixon and the White House were mishandling their responses to their political opponents.

Buchanan bemoaned that “the media, the left, the liberal academic community, the Senate doves—whom we overran and routed in November [with a series of speeches]—in one of the most effective political offensives of recent memory, have regained the initiative.” He griped that there were “members of our own White House Staff” who did not realize that “these people…want to dominate, discredit and drive this Administration out of power two years hence.” And the White House reaction to “their renewed assault,” he added, had been “too pleading, too conciliatory, gestures of virtual appeasement to our ideological enemies.” Buchanan was particularly peeved that the Nixon administration was willing to place limits on its military actions in Vietnam and that government spokespersons seemed defensive about the recent incursions into Cambodia.

Buchanan was aghast that “scores” of student protesters who had come to Washington for an anti-war demonstration had been invited to talk with White House staffers: “They were not all lovable children at the [Washington] Monument grounds…[M]any were close-minded, arrogant and intransigent and engaged in gutter obscenities against the President of the United States.” By engaging these opponents, he wrote, “we gain an appearance of openness but also of a lack of certainty, of being a bit panicked and we merited the increased contempt of those who can spot weakness and uncertainty a mile off. We also confused the millions of Americans who believe deeply the President’s strong stand is right.”

Listening to others with different points of view was fine, Buchanan conceded (emphasis his) but “the merit lies solely in the public impression conveyed; that we are listening.” In other words, do it for PR. But don’t allow this “listening” to elevate the opposition.

In the memo, Buchanan pushed Nixon to take an “inventory of the country.” The universities have “capitulated,” he noted, saying that college presidents have yielded control to student protesters “rather than risk the wrath of their students.” Example No. 1: Kingman Brewster, the Yale president, whom Buchanan called a “craven coward.” There was not much to do about the loss of the campuses, Buchanan acknowledged, except to “search constantly and find those university presidents and teachers with the courage to stand up.”

The media was more of a problem. Buchanan railed against media reports about US soldiers who had not wanted to participate in the Cambodia invasion, suggesting that these stories warranted “concerted counterattacks.” He told Nixon that “the left now so dominates the media that they can very nearly neutralize a Presidential presentation or even a military operation.” He added: “We should not hesitate to attack [the press] and attack hard when it steps out of bounds; and we ought to give consideration to ways and means if necessary to acquire either a government or other network through which we can tell our story to the country.” He seemed to have been pondering setting up a government-controlled television network.

Pointing out that much of the world was arrayed against the administration, Buchanan called for Nixon to mount a vigorous offensive:

With the media, the articulate voices of the Senate, the bulk of the academic community, the great foundations, the men of prominence in law and those who have left government service all adamantly against us—we must begin, I believe again [to] elevate the people to use more fully and more often the great but few weapons we have, the President and the Vice President and the Cabinet in an aggressive manner.

The majority of Americans were on the side of the administration, Buchanan maintained, “but they are men and women who do not understand sophisticated ideas.” These people needed to be led forcefully. He had proposed that the White House send Vice President Spiro Agnew to march with “the hard hats” in support of the war in New York City:

The message would have hit every blue collar worker in the country and these are our people now—if we want them—and frankly, they are better patriots and more pro-Nixon than the little knot of [moderate Republican] Riponers we have sought to cultivate since we came into office.

Forget making amends with critics in and outside of Washington, even those from within Republican ranks, Buchanan advised:

It should be our focus to constantly speak to, to assure, to win, to aid, to promote the President’s natural constituency—which is now the working men and women of the country, the common man, the Roosevelt New Dealer. When in trouble, that is where we should turn, not try to find a common ground with our adversaries.

Buchanan was not adverse to publicity moves:

I strongly endorse symbolic gestures toward groups especially the blacks where symbols count for so much—because the President is President of all the people and while they will never vote for us, we must never let them come to believe we don’t give a damn about them—or that they are outside our province of concern.

But there was no reason to go beyond symbolism. And, he added, no reason to accept any disagreement within the federal government: “We have [not] been ruthless enough in eliminating those lower echelon employees who disagree with the President, in rooting out endemic disloyalty, in ridding ourselves of those who…refuse to go out and fight for his position, whether they agreed with it to begin with or not.” Dump the “‘coalition’ point of view,” he told Nixon.

The power of the presidency, Buchanan explained, “may have to be used with great regularity and intensity than it has in the past—if the attacks against us stay at the same level.” Nixon would have to crush debate within the administration’s ranks. “We are an army under fire now,” he wrote. Nixon must run the government with an iron hand:

This is no argument for having National Guardsmen shooting 19-year-old girls in the head with an M-1—but we desperately have to present to the nation the impression of a strong government, led by tough people, who know exactly where they are going, and who are not going to be deterred an inch by any crowd of idealistic mixed-up kids running around the streets.

The White House needed spokespeople who would call a detractor “a goddamn liar.” It needed to discount any domestic opposition to the Vietnam War.

Buchanan’s memo, which he described as “discoursive [sic] and rambling,” ended with a plea for Nixon to view himself as the new FDR—not ideologically, but in temperament:

Our future, if it is going to be successful, may lie in the FDR pattern of engaging them openly in heated political warfare, of not cooling off our supporters but of stirring the fires and passions often. It seems to me here that we are in a contest over the soul of the country now and the decision will not be some middle compromise—it will be their kind of society or ours; we will prevail or they shall prevail. I know these incomplete thoughts and suggestions do not square at all with the calm, cool, dispassionate, orderly executive administration the President has conducted thus far, ably and well. But I think that clearly while the issue is not black and white, the decision is whether we shall be a fighting President in the mold of FDR or the presiding President in the manner of Ike.

In the battle for America, Nixon could be a fighter (FDR) or a wimp (Ike). Buchanan was egging on Nixon—and pushing the president to see the world in stark, if not paranoid, terms and to crush all enemies. In the coming years, the atmosphere in the White House would indeed become more us-versus-them, and the president and his men would hatch illegal and wild plots to destroy their foes, leading up to the Watergate operation. Buchanan’s boss would end up neither Rooseveltian or Eisenhowerian but Nixonian, perhaps still the worst of presidential adjectives. Yet Buchanan survived and thrived. Forty years later, he is still giving advice—now on cable television—on how Republicans can win the never-ending fight for America’s soul. It’s not quite the same, though, as advising the most powerful person in the world.