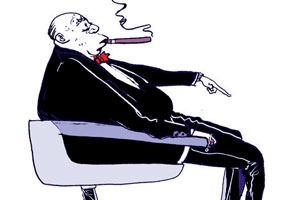 LAST JANUARY, shortly before President Obama took office, veteran Democratic pollster John Marttila conducted a series of focus groups on a range of issues in the Philadelphia and Baltimore areas. When the conversations turned to the economy, Marttila was shocked. In the middle of the financial collapse, these people—men and women of different ages, incomes, races, and political affiliations—were predictably ticked off. But, he recalls, the “dominant emotional dynamic was self-criticism. They really felt that they had failed. They had spent too much on things they didn’t need.” The pollster had expected rage at Wall Street and George W. Bush, but the people in the groups barely mentioned Bush. And though they were upset by the shady and incomprehensible machinations of big banks, they were not revved up for revenge. “Their intellectual criticism was directed at the financial world,” Marttila says, “but their emotional criticism was directed at themselves.” Bottom line: They were not reaching for the pitchforks.

A year later, as Congress struggles with financial reform, populist fury aimed at the one-time masters of the universe has yet to materialize in any targeted manner; there’s no mass movement demanding fundamental change. Sure, outrage over executive compensation caught the attention of regulators and lawmakers, and President Barack Obama and the Federal Reserve have taken limited steps to curb pay. But lawmakers have apparently not been fretting too much about public sentiment as they followed the urgings of finance lobbyists and weakened legislation to rein in Wall Street.

So where’s the wrath? I asked a number of public opinion experts and politicians that question. Most of them said there was indeed anger outside the Beltway—just not the sort of vocal indignation that directly translates into action in Washington. Why?

Politicians Don’t Care. “People don’t know what to do with the anger they do have,” says Marttila, because they feel blocked by “senators, representatives, and [Treasury Secretary] Timothy Geithner, who speaks gobbledygook.” Wall Street, in other words, is protected by the people’s representatives. “There is a layer between Americans and the villains of Wall Street, and that’s Congress,” Marttila contends. With Obama adopting mostly mainstream positions on economic issues, no national figure has stepped in to rally the resentment. Nobody has put popular anger to good use, because nobody really wants to.

Fear, Not Loathing. As a leading Democratic opponent of the banking bailouts, Rep. Brad Sherman of California has thought a fair amount about public sentiment and the economic crisis. “The public is very angry at Wall Street,” he says. “But they are constantly told by all the respected voices that if we don’t protect and preserve the institutions on Wall Street, we’ll be fighting for rat meat on the streets.” And this fearmongering works. Fear, Sherman says, is generally stronger than anger. The resentment that does exist is diffuse; it is not channeled toward specific solutions. The fear, however, is specific: What will happen to me and my family? With authorities in government and the media incessantly bleating that what’s good for Wall Street is good for the country, Sherman adds, “we’re angry at those people and we’re too fearful to do anything about it.”

It’s Complicated. There’s no doubt Americans are upset about paying for the failures of banks and corporations, says Democratic pollster Mark Mellman. But the financial issues involved appear “incredibly arcane and difficult to penetrate. How do you regulate derivatives when 99 percent of the public don’t understand it?” Marttila agrees: “The public policy implications are beyond the reach, vocabulary, and discussion of many. So the bad guys escape.”

Big Business vs. Big Government. For many decades, Americans have held negative attitudes toward the titans of industry. “It’s a constant,” says Frank Newport, editor-in-chief of the Gallup Poll. “You never go wrong vilifying big business.” But Americans also don’t fancy the counterbalance to corporate power: government. Since 1965, Gallup has asked survey respondents to choose the biggest future threat to the country: big business, big labor, or big government. Big government always wins—by a lot. In December 2006, 61 percent said they fretted about the government, compared with 25 percent who feared corporate power. Last spring, when Wall Street was in deep disrepute, the numbers changed only slightly: 55 percent still fingered big government as the greatest threat. “People always have concern about the government doing too much,” says Newport, “even when [it’s] regulating financial institutions they don’t like.” In fact, as recently as September, Gallup found that 45 percent of Americans believed there was too much government regulation of business. Only 24 percent said there was too little. “The lucky thing for business is that its foil is government,” concludes Andrew Kohut, president of the Pew Research Center.

This past summer, right-wing activists appeared to corner the market on populist rage. David Winston, a Republican consultant, maintains that this particular anger—over “death panels” and Obama “socialism”—was not widespread. Still, in September, when Rasmussen pollsters asked people how angry they were at current federal policies, without specifying which ones, two-thirds said “very” or “somewhat.” Another Rasmussen poll found that 53 percent opposed greater regulation of the finance industry.

WHAT ELSE COULD $14 TRILLION BUY?

That’s the real size of the bailout.

What else could it buy?

10 years of CO2 offsets for all Americans
$559 billion

20 years of universal preschool in US
$860 billion

Buying a house for every homeless American
$878 billion

And even when Americans like a new regulatory idea—such as the proposed Consumer Financial Protection Agency, which several pollsters said is popular—public sentiment hasn’t been powerful enough to give lawmakers pause. Without noticeable public demand for an agency with teeth, it was easy for Congress to water down the proposal. As the House was working on this legislation in October, a consultant for the financial services industry told me that big banks were even cutting back on public relations help because they weren’t sensing much popular animus and, consequently, did not expect to be whacked too hard on the Hill.

Too Many Targets. Wall Street is also fortunate that it’s not the only target of popular anger. Kohut’s polls have found resentment at bailed-out banks, at homeowners who purchased houses they couldn’t afford, and at the ballooning federal deficit. Because banks are seen as just one of the problems, “there’s a little more support—but not a sea change—in how people feel about the government overseeing financial institutions.” And in polling conducted since Obama took power, Kohut notes, respondents have been giving more conservative answers over time. In exit polls on Election Day 2008, more voters were in favor of activist government than had been four years earlier. But by February 2009, as an activist president settled into office, that number had already started dropping. The Obama presidency practically began with a backlash.

Jobs, Jobs, Jobs. Winston, the GOP consultant, says that Americans share “a broad sense of frustration that Wall Street has been taken care of”—and they’ve gotten nothing. Even though the Obama administration and the Democratic Congress passed a hefty stimulus package that likely contributed to GDP growth, the jobs picture—what Americans care about the most—keeps getting worse. “Unemployment trumps Wall Street malfeasance,” Winston maintains. “And most people don’t see a financial protection agency or more regulation as a solution to unemployment.”

So is Wall Street in the clear? Just a few new regulations here and there, and then it’s game on? The pollsters I consulted agreed that anyone tracking popular anger in the coming months should be watching not the Dow but the unemployment numbers. Anger prompted by joblessness will focus on politicians, not hedge fund managers. Which means that if politicians let Wall Street get away with shenanigans that kill jobs, they could end up paying for it with their careers. “Wall Street has probably weathered the worst,” Rep. Sherman says ruefully. “And Washington has not faced the worst.”