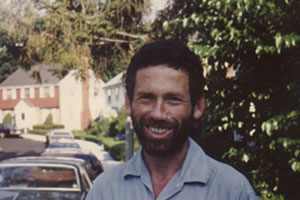 On January 5, 1985, my brother, Boris Weisfeiler, disappeared at the end of a 10-day solo hiking trip in the wilderness of Chile. He had planned to take a bus from the small southern town of San Fabian to Santiago, and then to fly to the United States to resume teaching at Pennsylvania State University where he was a mathematics professor. He never returned.

After a trapper discovered his backpack 10 days later on the bank of the Nuble river, a local court ruled that he had died of accidental drowning. But declassified US documents, from the US embassy and the CIA, tell a far more sinister and painful story of kidnapping, torture, and disappearance at the hands of General Augusto Pinochet’s forces of repression—a story that, for my family, still has no ending.  My brother’s body has never been found; like so many other family members of the disappeared, in my heart I can not even be 100 percent sure he is dead. Twenty five years later, Boris Weisfeiler remains the lone US citizen among some 1100 Chilean desaparecidos from the Pinochet era.

For the first 15 years after Boris disappeared in Chile, I knew virtually nothing about his fate. In early 1985, his friends and colleagues at Penn State hired a private detective in Chile to investigate what had happened to him. His inconclusive report, which drew on statements by local police “Carabinero” forces later implicated in Boris’s disappearance, concluded that Boris had drowned or been killed by thieves trying to rob him.  My repeated requests for information from the Department of State did not provide clear answers either. The US government response was that Boris Weisfeiler went hiking, probably drowned at the river crossing, and that the Embassy was keeping his case open.

But the US government had far more information on Boris than it shared with me.  Indeed, I did not know until June of 2000 that the State Department kept a comprehensive file of secret documents that directly implicated the Chilean security forces in my brother’s disappearance. In the aftermath of Gen. Pinochet’s October 1998 arrest in London, the Clinton administration declassified thousands of US records on his repression, among them more than 400 cables, memos and reports relating to the Weisfeiler case.

Those documents contain ample evidence that Boris did not drown, but had been intercepted, beaten, and disappeared by police and/or army patrols that went searching for him after a peasant reported a “foreigner” in the region. They reveal a massive effort by local Carabinero officers and high-ranking military commanders to conceal the crime and mislead the US Embassy officers investigating Boris’ disappearance. According to the declassified documents, facts were misrepresented, witnesses pressured and some perhaps eliminated, and evidence destroyed.  US diplomatic notes and other Embassy’s requests for information were not answered for prolonged periods of time—if at all.

The most disturbing information, however, came from informants. In mid-October 1985, a US Consul’s account from a visit to the area summarized interviews of a local informant, noting “that Carabineros might have overreacted upon learning of the presence of a stranger in the area as the Pinochet government is ‘paranoid about foreign leftist extremists’ or left-leaning Chilean exiles entering Chile via the isolated Argentine border. He believed the Carabineros probably went in hot pursuit convinced of their worst fear, the clandestine entry of a political extremist.” This informant suspected that Carabineros might have killed Boris on the presumption he was a “subversive,” realized their mistake too late, and then tried to cover up the murder of a US citizen by planting his backpack on the riverbank downstream.

Another informant, according to one US declassified document, suggested to a CIA officer at the Embassy that Boris might have survived for some period of time after being disappeared. Such information, apparently, prevented the US Ambassador from closing the file on the Weisfeiler case by the end of 1985.

Almost two years later, in June 1987, an informant who called himself  “Daniel” talked several times to embassy officers. He claimed to be a member of a military patrol that detained Boris Weisfeiler and “in accordance with standing orders from the high command of the Chilean army” took him to a German enclave nearby called “Colonia Dignidad” for interrogation where they determined that he was “a Jewish spy.” “Daniel” then stated that in Colonia, Boris was tortured and later “kept in animal-like conditions.” He claimed that my brother had survived in Colonia Dignidad for a period of over two years.

One CIA memorandum dated November 15 1987, cited yet another Chilean informant who was convinced that Weisfeiler “was detained by either a Carabinero or an army patrol, interrogated, beaten to death, and then thrown in the river.” As the source speculated: “Nobody aware of what really happened to Weisfeiler would ever tell the truth.”

Indeed, the truth about my brother’s fate has been elusive. My search for it began in earnest in 1997, after “Daniel” called into a radio talk show on Colonia Dignidad and told a somewhat different version of his story; he subsequently wrote a short statement for the talk show host claiming that Boris “was made to kneel on the ground and was murdered with a shot to the nape of his neck.” When this statement was leaked to the press, I hired a Chilean attorney. We petitioned the Chilean Courts to open an official investigation in January 2000, just two days before the 15th anniversary of Boris’ disappearance.

Since then, four different Chilean magistrates—three of them highly regarded judges from the Court of Appeals—have overseen the Weisfeiler case, and a dozen police detectives have searched for clues. Yet, ten long years later, the ongoing judicial investigation is nowhere close to uncovering what happened to my brother, nor identifying the perpetrators of his disappearance, nor locating his remains.

I have traveled to Chile eight times to meet with legal authorities, press the Chilean government to actively investigate, and lobby my own government to bring the weight and investigative resources of the United States to bear on my brother’s case.  Some four years ago, two very professional FBI attaches did open their own quiet investigation into Boris’ disappearance in Chile. The current judge, however, has refused to accept any offer of official assistance and has prohibited FBI participation in his pursuit of the case.

As the US documents make clear, the Pinochet regime violated the human rights of my brother, depriving him of liberty and life.  Yet, the disappearance of a US citizen during the Pinochet dictatorship has never been officially designated a human rights case in Chile. In its 1991 report, the National Commission on Truth and Reconciliation (commonly known as the Rettig Commission) did not include the Weisfeiler case as a human rights violation because it did not have enough information; the hundreds of US documents that contained the evidence and investigative leads were classified “secret” and therefore not made available to Chilean investigators for evaluation.

Recently, however, Chilean President Michelle Bachelet signed into law a new bill that reopens the Rettig Commission. Boris Weisfeiler’s case will be resubmitted to the Commission along with hundreds of the US declassified documents that were not available to the original commissioners.

By defining Boris’ disappearance as a human rights violation perpetrated by agents of the State—Carabineros and/or members of an Army patrol—the Government of Chile would finally acknowledge its role in my brother’s tragic fate.

For me, this would be the first major development in the quarter century long search for Boris. The ancient Chilean legal system where the judge is a judge, prosecutor, investigator and jury has contributed to a prolonged and painful process of endless waiting for me—and for countless other families of disappeared persons in Chile. The failure of the Chilean government, particularly the current one led by a president who is herself a victim of human rights violations, to actively conduct an independent investigation has been an inexplicable lost opportunity for my family. The failure of my own government to aggressively and productively pursue and resolve the case of a missing US citizen has been a constant source of frustration for me. Not knowing, after all this time, what happened to Boris haunts my life on a daily basis.

After 25 years, I need to find my brother, and give him a final goodbye.