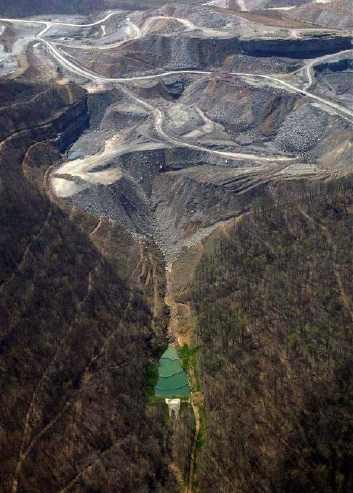 The Environmental Protection Agency on Monday gave the green light to a new mountaintop removal coal mining permit in West Virginia, after last year calling for a time-out on new permits for the controversial mining process that requires blasting the tops off mountains to reach the coal seams inside.

The approval of Patriot Coal Corp.’s permit to proceed was a huge disappointment to local activists and environmental groups who hoped the Obama administration would approach mountaintop removal (MTR) with more attention to the environmental and health impacts, as it promised last year. And now, just days after the EPA approved this new project, a team of scientists has published a scathing new peer-reviewed study on the impacts of mountaintop removal in the journal Science that makes the case for why MTR should be put on hold indefinitely.

The study, the most comprehensive analysis of studies on mountaintop removal to date, documents both the environmental devastation the process brings to sites in Appalachia and the human health impacts in surrounding communities. The report’s twelve authors, representing a wide range of scientific backgrounds from public health to ecosystem studies, recommend that the Environmental Protection Agency and the US Army Corps of Engineers put a hold on all new mountaintop mining permits until further studies and recommendations for impact mitigation can be conducted.

“The science is so overwhelming that the only conclusion one can reach is that mountaintop mining has to be stopped,” said lead author Margaret Palmer, director of the Center for Environmental Science at the University of Maryland, at an event unveiling the report on Thursday. Palmer called the evidence of the harmful impacts “strong and irrefutable,” and noted that there is no indication that mitigation efforts are successful in reversing the damage.

The public health implications are among the most startling findings in the report. Lower birth weights and higher rates of mortality, lung cancer, and chronic heart, lung, and kidney disease are found in areas where mining is heaviest. Michael Hendryx, director of the Rural Health Research Center at West Virginia University and a co-author of the report, said studies have found an average of 11,000 more premature deaths per 100,000 residents in the counties with the most mining.

Hendryx said that the exact causes of the health effects are not known, though studies indicate they are likely tied to airborne toxins, dust, or contamination of water sources with selenium and other heavy metals and waste material. He believes that it is likely due to a combination of those factors, and that the next step in scientific study should be to look more closely at the health risks.

Waste from the mining sites is often dumped in streams, a practice that was made possible in 2002 when the Bush administration altered Clean Water Act rules to make it legal to fill valleys with waste from blast sites. The change significantly increased use of MTR, and since then more than 700 miles of streams have been completely buried by mountaintop-removal debris, while thousands of others have been damaged. The waste contains heavy metals and other toxic materials, which are released into waterways and carried downstream. The practice also destroys the existing ecosystems and reduces biodiversity in the surrounding areas.

Major damage is also caused by destruction of the mountains, as trees, vegetation, and topsoil are cleared to make way for blasting. Mountaintop removal is currently the biggest driver of land-use change in the Central Appalachian region, and floods have increased in number and severity in areas near mining sites.

William Schlesinger, president of the Cary Institute of Ecosystem Studies and co-author of the report, compared mountaintop removal sites to a moonscape, where all existing life has been annihilated. Worse, as he noted, the minimal efforts made to reclaim former mining sites are not nearly sufficient. “I would not expect much regeneration to anywhere near what it was for almost 10,000 years,” said Schlesinger.

“One of the most troubling conclusions is that the effects are going to persist over a long time period, and are difficult, if not impossible, to mitigate,” added Keith Eshleman, a co-author also with the University of Maryland Center for Environmental Science.

The scientists’ other major point in the report is that laws to regulate mining have been grossly ignored by coal companies, state regulators, and the US EPA. Co-author Dennis Lemly, a biologist with the US Forest Service and professor at Wake Forest University, notes that little attention is given to violations of existing laws. An MTR site adjacent to the permit approved in West Virginia this week had 600 water quality violations in just the period of 2005 to 2007, Lemly said, and no action has been taken against them. And, he said, scant attention was given to this in the review of the new permit application. “This is just business as usual,” said Lemly.

The Science report will be officially released tomorrow. Lead author Palmer said that they have presented the study to representatives from the EPA, but do not know yet whether it will impact the agency’s decisions going forward. “Now the onus is on the EPA to figure out what needs to be done,” Palmer said.