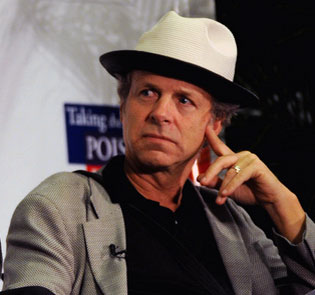 Mark McKinnon | Flickr/Tulane Public Relations (Creative Commons).Many independent voters and some Republicans seem to agree with most liberals that the Supreme Court’s decision to flood elections with corporate money was, quite simply, insane. One of those Republicans is Mark McKinnon, the political operative who did media strategy for George W. Bush and John McCain. McKinnon is on the board of Change Congress, law professor Larry Lessig’s aggressive campaign finance reform organization, and he clearly buys Lessig’s argument that campaign finance restrictions are good for small-government conservatives. (Short version: Lessig and McKinnon argue that big corporations and interest groups use campaign donations to expand government to benefit themselves.)

The problem, however, is that the Supreme Court’s conservatives wouldn’t have had the majority they needed to push through this decision if it weren’t for Samuel Alito and John Roberts. George W. Bush appointed them, and Mark McKinnon, of course, worked to elect George W. Bush. So I asked McKinnon if he felt partially responsible for the decision he calls “outrageous.” The answer: not really. “I didn’t agree with President Bush on a lot of things but I supported him for President, did so without reservation, and have no regrets about that,” McKinnon said. “I disagree with this decision, I disagree with the notion that corporations need a first amendment vote, and I’ve always expressed my disagreements with my Republican community and that’s why I’m doing so today.”

When I asked McKinnon whether he would have preferred for Bush to appoint justices who would have made a different decision on this case, he said that he would have “preferred a different outcome,” but that he “didn’t get to make those decisions, the president did.”

That’s all well and good, and it’s nice that McKinnon is supporting Change Congress. But it’s worth remembering (especially if you’re an independent voter disgusted by the decision) that this ruling is the result of Republican rule and conservative Supreme Court appointments.

With very few exceptions, the modern GOP has always been opposed to campaign finance restrictions. That’s despite the obvious fact that regulations and the tax code would be simpler, and handouts to government favorites rarer, if members of Congress weren’t so dependent on campaign donations.

One of the precedents the Supreme Court gutted (well, contradicted the spirit of) on Thursday was McConnell v. FEC, brought by the current Republican leader in the Senate. Mitch McConnell sued the Federal Election Commission in 2002 claiming that campaign finance laws were, in the words of our own Stephanie Mencimer, “a violation of his First Amendment right to take gobs of corporate money to get elected.” McConnell was at the Court again on Thursday to celebrate his ultimate victory.