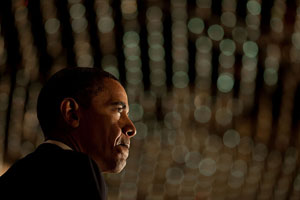 No deal. Not even a fig leaf.

That seemed to be the implication of President Barack Obama’s much-anticipated speech at the Copenhagen climate summit.

He arrived at the Bella Center at 9:30 in the morning and immediately huddled in a non-scheduled and tense meeting with 18 other world leaders, including Chinese Vice Foreign Minister He Yafei. As Obama and the others talked, White House officials told reporters that Obama had ripped up his schedule for the day—supposedly the last day of the conference—and was attempting to rescue the troubled negotiations. He apparently did not succeed.

After the meeting ended, the summit began its most high-profile session. Danish Prime Minister Lars Rasmussen opened the gathering, saying that it is “not too often us leaders get a chance to chart out a new course for our planet.” No such course was forthcoming. Minutes later, Chinese Premier Wen Jibao hailed his own nation’s efforts to curb greenhouse gas emissions. But he offered no give on the key matters that had been raised by the United States: China placing its emissions reductions within a binding treaty and subjecting them to outside verification. Wen indicated that China would keep its emissions limits voluntary and unilateral. Next Brazilian President Luiz Lula da Silva said it would take a “miracle” to reach an accord at Copenhagen. He complained that due to the lack of progress in the negotiations he had been forced to participate in a 2:00 am meeting with other world leaders. He declared that “each country has to have the confidence to do its own oversight”—seemingly siding with China on this front.

Then it was Obama’s turn. His eight-minutes of remarks signaled a global train wreck. Not hiding his anger and frustration, he said, “I think our ability to take collective action is in doubt.” He maintained that his administration has started to mount an “ambitious” plan to cut emissions. And he contended that it is “in our mutual interest to achieve a global accord in which we agree to  steps, and to hold each other accountable for certain commitments.” According to his prepared text, Obama was next supposed to say, “I believe that the pieces of that accord are now clear.” (Emphasis added.) Instead, he asserted, “I believe that the pieces of that accord should now be clear.” That is, there was no consensus among the major global leaders regarding what a deal would look like–not even one that would paper over the deep differences that have plagued the Copenhagen summit from the start: what targets to set; how to include both developed and developing countries within the same framework; what financing would be available for international programs to help poorer nations contend with climate change.

Obama played it simple and hard. He maintained the United States was calling for three basic principles: mitigation, transparency, and financing. But he noted that it was absolutely necessary to verify the reductions commitments of the major emitters. (China is now Major Emitter Number One.) “Without such accountability, any agreement would be empty words on a page,” Obama argued. And an international pact without such mechanisms, he remarked, “would be a hollow victory.” He reminded the conference that the US pledge to contribute to a $100 billion international fund by 2020 was predicated on the establishment of a “broader accord” that contained effective reviews and covered all nations’ reductions commitments.

Obama essentially accused other leaders of preferring “posturing to action.” He explained, “I’m sure many consider this an imperfect framework…No country will get everything it wants…There are those developing countries that want aid with no strings attached and no obligations of transparency. And there are those advanced nations who think that developing countries cannot absorb this assistance, and that the world’s fastest-growing emitters [that is, China, India and other major developing countries] should bear a greater share of the burden.”

Obama was clearly venting: “We know the fault lines because we’ve been imprisoned by them for years. These international discussions…have taken place for two decades. And we have very little to show for it except for a increase in the acceleration of the climate change phenomenon.” If an accord is not reached at this summit, he remarked, “we will be back having the same stale arguments month after month, year after year, perhaps decade after decade—all while the danger of climate change grows until it is irreversible.”

This was not a speech of persuasion; it was one of positioning. After the morning meeting, Obama and his aides had obviously calculated that a deal was far off—perhaps not even possible—and that there was not much Obama could say in this speech to grease the way to a meaningful agreement. So the US president forcefully presented his stance, maintaining he was willing to compromise, and chastised others for failing to rise above their own interests.

This was widely seen at the Bella Center as a sign that talks had collapsed. American environmentalists appeared stunned, as they grappled with the implications: maybe collective global action to address global warming is not possible. The leaders of China, Brazil, and the United States had each acknowledged the threat of climate change and had each cited the steps their nations were taking to combat global warming. But these three short speeches indicated that the industrialized nations and the developing countries might not be able to find a joint path forward.

It’s possible that some semblance of some accord that says something about some of the stuff discussed endlessly by the Copenhagen negotiators could still be patched together. After their addresses, Obama and Wen were scheduled to meet. US officials at the conference said that there was still opportunity for progress on several issues. And the convention leaders have asked the thousands of delegate to think about staying until Sunday. But Obama’s speech suggested the climate summit could end in failure—perhaps one of historic and literally world-changing proportion.

UPDATE: Since the speeches, Obama and Wen have met twice in one-on-one sessions. Other meetings are under way, with various world leaders huddling in private areas, as the official proceedings grind on. Meanwhile, various texts of a minimal pact have circulated through the convention center. These drafts have not resolved key issues. The big sticking point still seems to be Chinese verification. The two latest drafts have no provisions calling for a legally binding treaty, and they say nothing about future negotiations. But these drafts do have a name: the “Copenhagen Accord.”

UPDATE: Obama announced a deal just after 4.30 pm EST, although the outline was vague and it’s not yet clear that all countries will sign on.