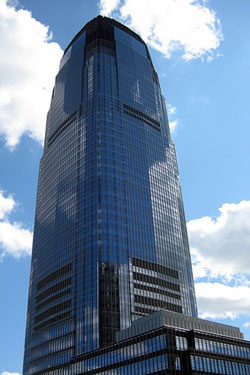 Flickr/wallyg (Creative Commons).Has the backlash to the Goldman Sachs backlash officially begun? Jessica Pressler over at New York‘s excellent Daily Intel says “it’s become so fashionable to hate Goldman Sachs that it’s actually unfashionable.” Singled out for criticism is this Bloomberg piece on the firm. The article centers on the claim that Goldman benefited from 9/11 because “Building a new headquarters cater-cornered to where the World Trade Center once stood qualified the firm to sell $1 billion of tax-free Liberty Bonds and get about $49 million of job-grant funds, tax exemptions and energy discounts.” Pressler calls BS:

First of all, why not just headline the story “Goldman Sachs Benefited From 9/11,” Bloomberg, because that is clearly the audience you’re trying to reach? We guess you can’t, since that would be grotesquely untrue. Second, what exactly are you telling us here? That Goldman Sachs took advantage of tax breaks to get a discount on a new headquarters? That they ran a cost-benefit analysis and came away thinking, hey, that’s a pretty good deal for us? YOU DON’T SAY.

Of course they did! That’s what they do. Also breaking: They sometimes package bunches of crap and make it look attractive so that they can sell it for more money. You know who else does that? The makers of CEREAL. The guy who runs American Apparel. Oh, and pretty much everyone else because that is what business is. In this case, Goldman Sachs’s new tower helped keep a lot of jobs in lower Manhattan, despite the ice-skating snafu, so we can’t say we’re all that bothered. Honestly, news cycle, bring us some real evidence that Goldman had something to do with the intelligence saying there were WMDs in Iraq, or get the hell out of our office.

The reason that most consumer goods companies are very careful about product safety isn’t just that it’s good business. It’s also that there’s usually a regulator—the Consumer Product Safety Commission or what-have-you—that’s in charge of bringing the hammer down on them if they sell us unsafe products. (Even the notoriously lax FDA is better than nothing.) Financial products don’t have that kind of dedicated safety agency, which is why Elizabeth Warren suggested a Financial Product Safety Commission. It’s also why that new agency is part of the proposed regulatory reforms the House passed earlier this year.

This all goes back to an idea that I’m going to keep harping on. It’s ridiculous to expect all individuals—or companies—to act responsibly in the absence of laws and regulations restricting their behavior and imposing penalties for noncompliance. While everyone’s outrage is focused on Goldman Sachs, the other banks will have more freedom to do fishy stuff and improve their competitive position. That’s why liberals believe that if you’re going to fix big problems like the ones that led to the financial crisis, you have to make those difficult changes to laws and incentives—not just rail against a single corporation.

Want more on all this? Check out the January/February issue of Mother Jones.