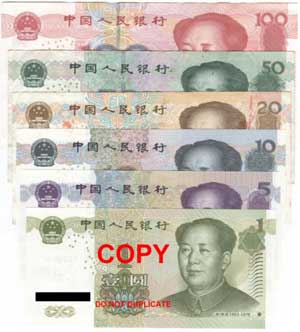 Monday’s New York Times op-ed page featured two columns arguing that China’s policy of manipulating its currency to keep its exchange rate with the dollar constant is causing big problems for the United States and the rest of the world.

Here’s the necessary background, via Paul Krugman: “Most of the world’s major currencies ‘float’ against one another. That is, their relative values move up or down depending on market forces.” The renminbi (a.k.a. yuan), China’s currency, is the main exception to the rule—China’s leaders purposely weaken it by buying vast quantities of dollars.

“A heavily undervalued renminbi is the key financial distortion in the world economy today,” write Niall Ferguson, a history professor at Harvard, and Moritz Schularick, a professor of economic history at the Free University in Berlin. “China has carried out what amounts to a beggar-thy-neighbor devaluation, keeping the yuan-dollar exchange rate fixed even as the dollar has fallen sharply against other major currencies,” writes Krugman. Both columns urge President Barack Obama to address the issue with Chinese official during his visit to the country this week.

Both Krugman and the Ferguson-Schularick duo argue that China’s management of the renminbi-dollar exchange rate is artificially deflating the yuan’s value, making Chinese exports more attractive in places like the United States and making exports from all other countries less competitive—and keeping America’s trade deficit with China massive. Ever wondered why everything is “Made in China?” This currency manipulation, Krugman and Ferguson/Schularick say, is a big reason why.

So it would almost certainly be in America’s interests to get China to stop fiddling with the currency markets. Unfortunately, no one really knows how to do that. Here’s the key paragraph from Ferguson and Schularick:

Call it the 10:10 deal: the Chinese get 10 percent growth; America gets 10 percent unemployment. The deal is even worse for the rest of the world — and that includes some of America’s biggest export markets and most loyal allies. The question is: What can the United States offer to make the Chinese abandon the dollar peg that has served them so well?

Ferguson and Schularick seem to think that the Chinese authorities’ principle worry with letting the yuan appreciate is that their dollar reserves would be worth less. That’s not nearly broad enough. The Chinese authorities’ main priority is the survival of the current political regime. Maintaining high levels of growth and low levels of unemployment are crucial to achieving that goal—and that requires keeping Chinese exports cheap.

Chinese leaders are simply making a rational calculation. Until someone convinces them that the economic cost to China of keeping the yuan artificially cheap exceeds the economic benefit, they’re going to keep on doing it.