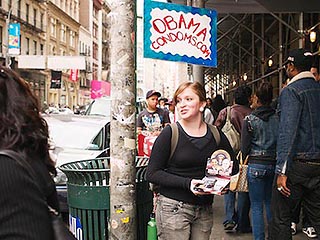 The latest UN Population Fund report says that an important component in combatting climate change is limiting population growth. But will reigning in population growth really stop climate change? Quickly, in itself, no. Can it help, yes, though the situation is far more complex that a quick-grabby, twitter friendly headline can ever portray it.

There have been an increasing number of stories coming to light detailing how organized crime syndicates around the world have been getting their dirty little fingers into the green world. The latest: 1) Italian police have arrested two businessmen on fraud charges, linking them with Mafia in wind farm permit fixing schemes; and 2) The government of Madagascar (such as it is) appears to be tied in with what’s being called a ‘timber mafia’, profiting from illegal wood sales largely sent to China:

Not long after Obama returns from his Asian tour, expect a lengthy state visit to Canada, with announcements to follow of nuclear power plant development (needed to extract the oil) and carbon dioxide storage tests in Alberta: at Canadian and US taxpayer expense. Then a repeat of NAFTA vows to ensure that there are no added costs for pumping the Alberta extracted crude across the border. If that doesn’t work out, and if oil goes back up over US$100/barrel, it’s oil shale or bust.

The binary choice is a false one: Properly administered hunting is not detrimental to wildlife populations and without proper management photo safaris collectively, regardless of the individual ‘greenness’ of individual operations, can have adverse impacts on wildlife.

No matter if you’re a climate activist or a firm believer in the political process, there’s no getting around that the negotiations leading up to next month’s COP15 conference have been tough of late. The need to keep pushing for strong and immediate climate action has never been greater — something which NRDC President Frances Beinecke’s just-released book Clean Energy, Common Sensedoes compellingly — so, when over the weekend it was de facto officially announced that Copenhagen will just produce a framework for future binding action it seemed the perfect entrée for the latest TreeHugger interview:

Scientists Create Bacteria That Lights Up Around Landmines

It seems like something straight out of a science fiction film, but this new bacteria is very real. “Scientists produced the bacteria using a new technique called BioBricking, which manipulates packages of DNA.” The bacteria is then mixed into a colorless solution, “which forms green patches when sprayed onto ground where mines are buried.” The bacterial stew can also be dropped via airplane in extremely sensitive areas.

If ‘moral prerogative’ isn’t reason enough to invest in protecting nature, here’s another one: it’s just been found to bring up to hundredfold return on capital. Yes, that’s a potential 10000% gain–better than an investment in gold. According to a new study called The Economics of Ecosystems and Biodiversity (TEEB), putting money into protecting wetlands, coral reefs, and forests could be the best financial move one could ever make.