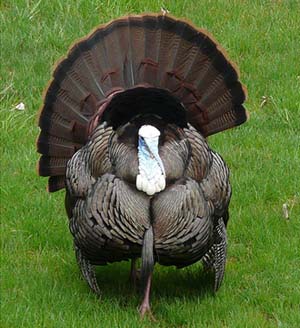 So this is what happens when you ask a bunch of wise-cracking MoJo editorial staffers, in the spirit of Thanksgiving, to name the artists, albums, and songs for which they would like to give thanks—and why. Feel free to post comments with your own selections.

NWA’s “Gangsta, Gangsta” — Because journalism, like gangsta rap, is not about a salary, it’s all about reality.

Pavement, Crooked Rain — Especially the wonderfully expressed lyric Lame driver, the Force is against you.

Johnny Flynn and the Sussex Wit, A Larum — I will no doubt wear out my iPod listening to this British singer-songwriter’s phenomenal debut as I eagerly await his second album. (Oh, hey! Look!)

Roxy Music’s Avalon — It’s the best album to play when you’re really hungover in an apartment with a great view of London. Plus, it got me laid in college.

(Scroll down for more…)

Lady Gaga’s “Bad Romance” video — Try as I might, I just can’t stop watching this. Or loving it.

X, “Revolution” — The Australian band, thank you. Especially for the guttural moment of clarity in the line Rock ‘n’ roll may be no solution, but that’s what I wanna hear!

Grateful Dead, “Terrapin Station” from any show in the Spring of 1977 — Because whenever I’m looking to strike that rare and different tone, this is from whence the inspiration flows.

Zero Boys, Vicious Circle — Not a bit diminished, even after listening to it consistently for more than 20 years. One of the best punk/hardcore albums, ever, and it’s from the Midwest!

Sonic’s Rendezvous Band, “City Slang” — A moment of musical perfection, care of Fred “Sonic” Smith. Same song on both sides of the 45. Play one side, flip it over. Repeat. I can never get enough.

Ramones, End of the Century — One of the most maligned Ramones albums, but the matchup with Phil Spector let the boys’ 1960s AM radio influences really shine.

X, Wild Gift — The American band, thanks, not the Aussie one. Pick your album, in fact. The brilliant combo of John Doe and Exene Cervenka perfectly captured the dark underbelly of 1980s Los Angeles. Speaking of which, Los Angeles is another X album I’m thankful for.

The Pixies, Surfer Rosa — There were rumors. He was into field-hockey players. Worth it just for the between-song banter.

Bob Dylan, “Brownsville Girl” — Because Dylan has expressed every thought and emotion I’ve ever had, only more eloquently—many of them in this rambling ballad.

The Replacements, Sorry Ma, Forgot to Take Out the Trash — Because sometimes you need to get drunk.

Sound of Animals Fighting, “My Horse Must Lose” — Makes me feel semi-hip for all of five seconds. Bonus: Rich vocals from Matthew Kelly of the Autumns.

Keith Jarrett, The Köln Concert — The best thing that ever happened in the boring, gray place where I grew up.

The Decemberists, “Valerie Plame” — Because who doesn’t like being reminded of all the things Cheney can’t recall about her?

Kelly Clarkson, “Walk Away” — There are only two kinds of people in this world: People who think Kelly’s bangin’…and liars.

The Manfred Mann’s Earth Band version of Springstein’s “Blinded by the Light” — It’s just fun trying to figure out that one line that’s like, “Wrapped up like a doucher in the rotor in the night,” or some shit like that.

M.I.A., “Bamboo Banger” — Because trying to wrap my head around that beat kept me from hurling on the flight from Mumbai to Hyderabad.

Ginuwine, “Pony” — Blew my mind when I was nine. Nastiest thing I’d ever heard in my life.

Spice Girls, Spice — Got me through the Summer of ’96, when I couldn’t go outside.

The Deftones, Around the Fur — It was the first album I ever bought, and the last great one they ever made.

Wisin y Yandel — The El Dúo Dinámico drop a new album like every other Tuesday, and every single one of them is brilliant.

Janis Joplin, “Ball & Chain (Live)” — The song that made being in love at 19 feel okay: If you got it today, you don’t wear it tomorrow, man. Truer words were never spoken.

Lagwagon, “E. Dagger” — Because we are always here to make you laugh (best sing-along party song ever).

Gogol Bordello — Punk rock and Russian literature should get it on more often.

Or, The Whale — It’s endlessly entertaining to ponder why, exactly, such an otherwise decent band chose such a stupid-ass name.

The Band, “Carnival” — Reminds you why it pays to invest in really good speakers.

And since Thanksgiving is all about leftovers…

Bonnie “Prince” Billy covering R. Kelly’s “The World’s Greatest” — This piece of musical turkey tetrazzini is on heavy rotation in my head.

Jonathan Richman doing Tom Waits’ “Heart of Saturday Night” — A two-minute flashback to the days of diners and drag racing.