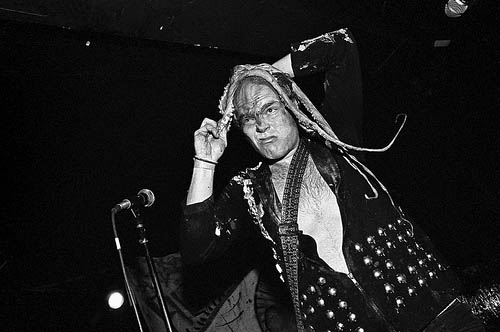 Picking your 9 or 10 favorite records from the past decade is a tall order for anyone, but especially for someone who consumes music like most people devour TV—headphones constantly plugged in. Get home, throw a record on the turntable. Wake up, do the same. Music all the time.

All this listening and digging and consuming is confined to a relatively narrow focus: pretty much anything guitar-based, but primarily punk, garage rock, hard rock ‘n’ roll, along with a smattering of country and metal. Throw in various sub-genres (girl groups, rockabilly, new wave, psych, hardcore) and I’ve got my hands full.

In compiling this list, I broke down and had to come up with two lists—one for albums and one for 7-inch vinyl. That let me slip in more bands and gave me a little wiggle room. I scuttled my plan to include yet another list—of the best reissues of the past decade. Too many, too much.

These are all vinyl releases from small (if not tiny) independent labels. Some are out of print. Many of the bands have long since crashed and burned. But thanks to this modern age, the music can still be easily tracked down somewhere online. I’ve included links when I could find them. So dig in.

LPs
Ooga Boogas — Romance & Adventure (2008; Aarght!)
The debut from this Australian band has spent so much time on my turntable over the past year or so, it was a shoo-in. It’s my current go-to when I don’t know what else to put on. While Eddy Current Suppression Ring is the darling Aussie punk band of the moment (deservedly so), the Ooga Boogas keep things mixed up a bit more, and aren’t afraid to stray into the silly (“Oogy Boogie”) or sweet (“Fannie Mae”). It may be too new to enjoy the same status as some of these older go-to records, but I predict this one will hold up over the years.

Bad Times — s/t (2001; Therapeutic Records)
The Memphis/Louisiana super-group record. You’ve got Jay Reatard, Mr. Eric Oblivian, and Monsieur King Louie. Each comes from blistering hot garage punk bands (the Reatards, the Oblivians, and King Louie’s One Man Band, respectively). The three of ’em got together, wrote some songs, practiced once, played a show in Illinois, recorded an album, and called it a day (until they played a “reunion” at a festival called the Horizontal Action Blackout in Chicago). Live fast/Die young. In and out. Ferociousness via rocknroll. “Streets of Iron” stands as one of the best songs of the decade. So tough. So vicious.

FM Knives — Useless and Modern (2002; Moo-La-La/Broken Rekids)
Simple and supremely catchy? Definitely applies to Sacramento, California’s FM Knives. On a closer listen though, it’s a band whose songs sound simple to the layperson’s ears, but have a sense of depth to them. That’s what makes ’em stick. And the lyrics? Genius stuff, on par with some of the finer moments of the Ramones. Vivid, descriptive, and catchy. The FM Knives melted down while on tour shortly after this album was released, but each member went on to form other great bands, including the Mayyors, the Pets, and Photobooth.

The Piranhas — Erotic Grit Movies (2002; In the Red)
Could’ve just as easily picked their self-titled album on the On/On Switch label. The two records are a kind of continuation of a long, weird dream from which you don’t want to wake. Just as you start to wrap your head around what’s going on, everything changes. The Piranhas sound like a band that would come from Detroit. They’re at times frightening and manic and absolutely crazed, getting under your skin and crawling around, making you dizzy with abrupt chord and tempo changes. One of the most interesting bands to come along in a while; not just weird for the sake of being weird. And the stories of their live shows are legendary: glass-covered Nintendo Powergloves, dead rats, prompt banishment from nearly every club in the greater Detroit area. Through it all, the music is solid, way ahead of its time.

The Little Killers — s/t (2003; Crypt Records)
This was the first record by a new band that the mostly reissue-focused Crypt Records had done in years. Within certain circles, that was a big deal. Reports came in of label honcho and tastemaker Tim Warren losing his shit after seeing the Little Killers for the first time. This record took a little time to really grow on me. It’s simple but catchy—like a great record should be, as far as I’m concerned. Every time it comes on I have fond memories of stomping around Belgrade. The LKs were my soundtrack for that trip. TURN UP THE VOLUME!

The Clone Defects — Blood on Jupiter (2001; Tom Perkins)
Another exceptionally tough call. I mean, I knew the Clone Defects would be on this list, but which record? I could’ve just as easily gone with Shapes of Venus or any of their singles. Another consistently great band from Detroit. (See the Piranhas above.) These guys raised some of the finest ghosts of punk’s past and took ’em joyriding around Detroit. Once they broke up, the singer, Timmy Vulgar, went on to form Human Eye, another band that could’ve easily made this list.

The Final Solutions — Disco Eraser (2003; Misprint Records)
At the time, everyone talked about how this was “Jay Reatard’s new band.” Well, sure, he was in it, but really it was the others—Zac, Justice, Tom, and later Quinn—who made this band. Final Solutions managed to sound punk in the most basic, raw, no-BS way, channeling late-’70s Europunk like Hubble Bubble, Pekinska Patka, or the Bastards. Their first album just rips. “Deep Six,” “Eat Shit Hologram,” “Can’t Sing Through My Fuzz Pedal”—all killer, no filler. Got to see singer Zac’s new band Sector Zero at Budget Rock this year. Not quite a continuation of the Final Solution formula or anything, but I suspect they might make my 2020 list.

A Frames — s/t (2002; S-S Records)
First time seeing the A Frames was in Ypsilanti, Michigan, where they played a sorta redneck bar with the Piranhas (my first time seeing them too). It was one of those shows that will stick with me forever. Floored by their ultra-minimalist, angular attack on music. They capped their set with a monstrous cover of “Batman” by X, the Australian band, not the American one. I’ve seen A Frames many times since and each has been great, but not as great as that first time, you know? And while I’m into all their albums, this first one still stands out.

Hunches — Yes. No. Shut It. (2002; In The Red)
Mind-blowing. Loud and fucked up, but not just loud and fucked up for the sake of it. Chris Gunn is one of the most fun guitar players to watch, and just one of the best around. That, plus the thoroughly solid rhythm section grounds what could easily be a total mess of a band.

Hex Dispensers — “Lose My Cool” (2008; Alien Snatch)
If I had more room, their first LP would’ve made the album list. As it is, I have to settle for this awesome 7-inch. From Austin, the Hex Dispensers are a blast furnace of power chords.

Baseball Furies — “I Hate Your Secret Club” (2004; Estrus Records)
On the list for the title song alone. The other songs are decent, fairly standard fare, but “I Hate Your Secret Club” had Buffalo’s almighty Baseball Furies leaning in an unexpectedly poppier vein than they showed on their earlier records. Foreshadowing a bit of what would come in the Tyrades, a band a few members formed upon moving to Chicago. Still tough, but catchy. A perfect combination.

No Hope for the Kids — “Das Reich” (2004; Backwards Masking)
Yet another single that gets included at least in part because there wasn’t enough room to include their one and only album. I think most people who are into hardcore have mostly written off Denmark’s NHFTK, but for suckers like me who like their hardcore with a strong dose of melody (think Toxic Reasons), I still can’t get enough. The flip side of this one, “Secret Police,” wins out as one of my favorite songs of the decade. Great songwriting all around.

Angry Angles — “Things Are Moving” (2005; Shattered)
All four songs here marked the transition out of the synthy Lost Sounds style and into what would become Jay Reatard’s more poppy solo career. The transition is key. Just stripped down enough, just raw enough.

Druid Perfume — “Goat Skin Glue” (2009; Italy)
From the ashes of the Piranhas (see LPs above), one of my favorite new bands and new favorite bands. “Goat Skin Glue” is a reworking of the first song off DP’s debut album. Proving Detroit still reigns supreme in the world of weird punk, a little Beefheartish thunder for ya.

Lost Sounds — “Don’t Bother Me” (2001; Solid Sex Lovie Doll)
I love Lost Sounds’ Black Wave album, and Memphis Is Dead, and Rat Brains. Hell, for such a prolific band they had far more hits than misses, but this record is really a perfect 7-inch. Four great songs, capped off with the killed “What’d I Say.” Unfortunately expensive and incredibly hard to find. But any of this band’s albums, or singles for that matter, are worth checking out. This Memphis power trio straddles the void between punk, garage, synth punk, Goth, and probably some other sub-sub-genres of punk.