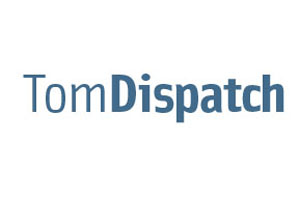 It’s now a commonplace occurence of the Afghan War. Western leaders in London, Berlin, Amsterdam, and Washington, as well as on flying visits to Kabul or even Kandahar, excoriate Afghan President Hamid Karzai for the “corruption” of his government. In return for their ongoing support, they repeatedly demand that he take significant action to “step up efforts to root out crime and corruption,” that he, in fact, “arrest and prosecute corrupt officials.”

Can there be any question that there is a plethora of corrupt officials to arrest? The president’s brother, Ahmed Wali Karzai, reportedly on the CIA payroll, is also, as it’s politely put in the press, a “suspected player in the country’s booming illegal opium trade.” Ahmad Rateb Popal, the president’s cousin and another figure long linked to the drug trade, runs a local security company protecting American supply convoys that, according to Aram Roston of the Nation magazine, is involved in an industry-wide protection scam, using American Army money to pay off the Taliban not to attack. In addition, American arms and ammunition are clearly ending up in Taliban hands. The recent presidential election was a spectacle of fraud; the Afghan Army, despite years of training, may hardly exist (as Ann Jones reported for this site in September); the ill-paid, ill-trained Afghan police are known to operate on the principle of corruption; and a surprisingly small percentage of foreign reconstruction funds actually makes it out of the pockets of big private contractors and western specialists, as well as security firms, and into Afghan hands.

And then, of course, there’s Kabul’s “Obama market.” (In the period when the Soviets ruled Kabul, it was the “Brezhnev market” in honor of the Russian leader, and decades later the “Bush market.”) This “notorious bazaar” is “full of chow and supplies bought or stolen from the vast US military bases,” according to Jay Price of the McClatchy newspapers, who calls the name “a modest counterweight to [Obama’s] Nobel Peace Prize.” His description includes the following: “One shop offered an expensive military-issue sleeping bag, tactical goggles like those used by US troops and a stack of plastic footlockers, including one stenciled ‘Campbell G Co. 10th Mtn Div.’ Another had a sophisticated ‘red-dot’ optical rifle sight of a kind often used by soldiers and contractors.”

In other words, from the American, European, and Japanese reconstruction boondoggle to the presidential palace, from the US and Afghan military to street-level, the country is a klepto-state. As number 179, it misses by only one place taking the rock-bottom spot in Transparency International’s latest global corruption index. Of course, what else could be expected in a situation in which the nation’s main source of funds is either narcotics—the country now accounts for a staggering 92% of global opium production—or foreign aid? To demand that President Karzai takes “steps” to “root out crime and corruption” is, under the circumstances, an absurdity, no matter how many special task forces to investigate graft he forms under Western pressure. It’s like asking him—to mix metaphors—either to put a gun to his head or drink the sea. Consider it a measure of Afghan realities today that you can hardly read a piece about the country in the Western press without the word “corruption” lurking somewhere in it, and yet the reporting on how that system of corruption actually works has generally been thin indeed.

If you want a peek at such a system in action, though, check out, Pratap Chatterjee’s recent piece from Kabul at TomDispatch, “Paying Off the Warlords.” It offers a rare inside look at how a pervasive system of nepotism and corruption—involving the country’s old “warlords” from the days of the post-Soviet civil war and its new corporate “reconstruction” raiders—actually works. Make no mistake, this is not a system amenable to “reform.”