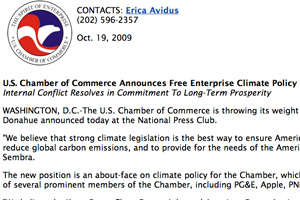 The Chamber of Commerce stunned DC on Monday by calling a last-minute press conference to announce a dramatic about-face in its climate policy—it would not only stop opposing the Kerry-Boxer climate bill but would work with them to make it better. But the whole thing turned out to be a hoax mounted by the Yes Men, a notorious band of anti-corporate pranksters.

Reporters received a press release early Monday stating that the Chamber would be “throwing its weight behind strong climate legislation” at an event at the National Press Club in downtown Washington, DC. But when I and others showed up, we were met by a fellow dressed in a suit looking like a typical corporate PR man. This wasn’t Chamber President and CEO Tom Donohue. And I recognized him as Yes Man Andy Bichlbaum. (I’ve written about the group previously.) He soon was telling reporters, “We at the Chamber have tried to keep climate science from interfering with business. But without a stable climate, there will be no business.”

The Yes Men posted text of the fake speech on a fake website that closely mirrors the actual Chamber site. There were a couple of tell-tale signs that there might be some funny business going on: The speech was to come from “Tom Donahue,” while the actual CEO of the Chamber is named “Tom Donohue.” And as TPM pointed out, the press release announcing the event was issued by one Erica Avidus, whose last name is Latin for “greedy.”

As one might expect, the real Chamber was none too pleased. Eric Wohlschlegel, spokesman for the US Chamber, showed up and protested loudly during the event. “This is a fraudulent press conference!” he yelled. Later he could be heard asking a Press Club employee how they could host this kind of stunt. “How could someone call and represent the Chamber in this way?” he asked. “We do a lot of events here. We’re very supportive of the Press Club.”

The Press Club wasn’t very happy either. An employee was overheard telling one of the organizers that they “could have canceled it based on your illegal behavior.”

Surely the reporters who showed up were also miffed. I initially fell for the press release, but was thankfully tipped off to the scam before the event. But reporters for Reuters, Greenwire and other news organizations showed up to cover the event, and Reuters, basing its reporting on the press release, posted a piece proclaiming that the Chamber had made an “about face” and “no longer opposes climate change legislation,” which was republished on the Washington Post and New York Times sites. National Journal took the bait as well.

Reuters ran a correction a little while later. Most reporters at the event, however, were utterly confused. “Which one is the real Chamber?” one asked.

The Yes Men, and their allies at the Avaaz Action Factory who helped coordinate the event, were pleased with the latest in their series of climate-change-related stunts. Recent efforts include a fake issue of the New York Post proclaiming “We’re Screwed!” that was distributed in New York during the United Nations Climate Summit; or their “Survivaball” system for withstanding climate change (a.k.a a “gated community for one”). Over the years, the Yes Men have honed an expertise in elaborate pranks that call attention to corporate misbehavior (see the latest issue of Mother Jones for a piece by Dave Gilson on the Yes Men’s MO and the changing role of the prank in the age of Borat). “It definitely does get attention for causes,” said Bichlbaum. “It definitely gets coverage about things, and points out obvious things. Like right now the Chamber has this troglodytic stance on climate change, completely ridiculous.”

UPDATE: It appears CNBC also bit on the fake story.

SEE ALSO:
US Chamber of Commerce responds to Yes Men hoax
A Yes Man talks to Mother Jones about the Chamber Prank
Kate Sheppard talks to Rachel Maddow about the Yes Men stunt
US Chamber spends a record $300,000 per day on lobbying