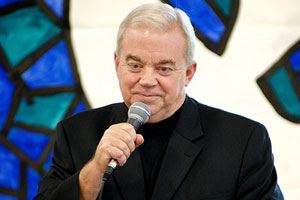 The Rev. Jim Wallis is sitting pretty these days. He’s the evangelist the media love—so much so that Democrats kow-tow before him. He says he’s progressive, and has some credentials to back up the claim: anti-poverty work and opposition to the Vietnam War. But he’s opposed to legal abortion and same-sex marriage. Nonetheless, eager for an evangelical partner, President Obama named Wallis to the President’s Council on Faith-Based and Neighborhood Partnerships, giving Wallis the ideal platform from which to try to subvert the debate over health-care reform for his anti-choice cause.

Today, Wallis, in his sanctimonious style, offers “A Faith Declaration for Health-Care Reform” that declares this:

Life and liberty must both be protected. The health care system should protect the sanctity and dignity of life in accordance with existing law and the current rules; and the prohibition on federal funding of abortions should be consistently and diligently applied to any legislation. Strong “conscience” protections should be enacted for health care workers to ensure they have the liberty to exercise their moral and religious beliefs in their profession. Evidence suggests that supporting low-income and pregnant women with adequate health care increases the number of women who chose to carry their child to term, so if we do reform right, we can reduce abortion in America. While religious people don’t all agree on all the issues of abortion, we should agree that it must not be allowed to derail the crucial need for comprehensive health care reform.

Depite his talk about not allowing abortion issues to “derail” health reform, that seems to be exactly what Wallis is up to.  As Frances Kissling reported in Salon, after winning a major point when Rep. Lois Capps, D-Calif., amended the House bill with a conscience clause exempting anti-choice health-care providers from having to cover or perform abortions, as well as an explicit prohibition on the use of federal funds to pay for abortions in accordance with the Hyde amendment and a prohibition on the use of federal subsidy dollars by private plans in the coverag of abortion, Wallis continued his crusade:

This, it now seems, is not enough for Wallis and company. They now want to be sure that if an anti-choice person chooses a plan that does cover abortion, the minuscule part of his premium that is allocated to abortion coverage for all subscribers is not used for abortion.

Get it?  It’s a chip-away strategy, a nuisance plan on Wallis’ part to gum up the health-care works.

Wallis often fancies himself to be the spokesman for “the faith community,” as he did in his response to Obama’s big health-care speech before a joint session of Congress, as Sarah Posner reported on TAPPED:

After last night’s presidential speech, the Rev. Jim Wallis of Sojourners issued a statement that claimed to speak for “the faith community.” He declares, “In his speech this evening, President Barack Obama made the commitments that a broad coalition in the faith community had asked for—reform as a moral issue, affordable coverage for all, and no federal funding of abortion.”

Really? The “faith community”—whatever that is—has demanded no federal funding for abortion?

Indeed, you won’t hear rhetoric about no federal funding for abortion coming from the mainline Protestant denominations.

Wallis contends that he’s never advocated the criminalization of abortion, but he makes plenty of common cause with those who do, like James Dobson of Focus on the Family. Posner explains:

[T]he recent discovery and dissection of a 1996 pro-life statement, “The America We Seek: A Statement of Pro-Life Principle and Concern,” by the journalist Frederick Clarkson, suggests otherwise.

Clarkson traces the connection between the statement, signed by Wallis, among others, aimed at making abortions more difficult to procure and current “common ground” strategies for “abortion reduction.” The statement, signed by major religious-right figures like James Dobson, was also signed by proponents of the Come Let Us Reason Together abortion-reduction strategy, including Wallis and Mercer University Christian ethics professor David Gushee. In it, they proposed a program of action, which called for the criminalization of doctors who perform abortions (but not of “women in crisis”), an increase in “crisis pregnancy centers,” and a constitutional amendment overruling Roe v. Wade and identifying the fetus as a person. The manifesto laid out virtually every anti-choice method of restricting abortion short of changing the composition of the Supreme Court to reverse Roe, the legal strategy Wallis and others see as unlikely.

The question, then, is what the heck is Wallis doing advising the White House, when he appears to be working against the president’s health-care agenda?  And why do Democrats hold open the door for this pompous, condescending man whose out for a quick and easy power-grab of the Democratic Party? Where is Wallis’ Democratic constituency?

One thing you can say about the religious right—when they took over the Republican Party, they did it the hard way, the old-fashioned way: they got their delegates seated after years of stealthily taking over the local-level machinery of the party. Wallis doesn’t have time for that kind of work, and apparently does need to do it. The party leaders have just ushered him in, caught in a spell, believing that the party’s salvation is bound in right-wing religion.

Even in his claim to work against poverty, Wallis leaves women out of the equation.  And the whole matter of the anti-choice position as a matter of theological orthodoxy is a fallacy. As I wrote two years ago:

[H]ere’s where I really get queasy with the Jim Wallis model of the “religious left.” For him, it’s all about poverty, but not about justice for women. Because if you believe in equal justice for women, then you have to concede that abortion must remain a woman’s option. A fetus is not a person. No religious tradition, before the onset of women’s emancipation, asserted that it was. A fetus can never, with any objective sense of justice, be given rights that trump those of the woman in which it resides. Religious leaders like Wallis say they have a religious mandate to alleviate poverty, but self-actualization is apparently quite another matter.

Most of the poor people in America are women and children, and without the self-actualization of women, their poverty will never be alleviated. If you want to give them food, shelter, and (limited) health care, but deny them their full panoply of rights, you’re just maintaining a class of poor people who will be beholden to your particular religious movement. And, somehow, I don’t think that’s what Jesus had in mind.