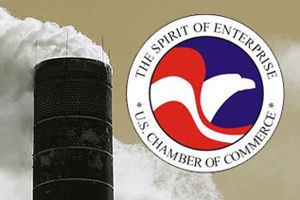 Background photo by Wikimedia Commons user <a href="http://commons.wikimedia.org/wiki/File:Smokestacks_3958.jpg">Dori</a> used under a CC License

A day after Mother Jones exposed the US Chamber of Commerce’s inflated membership number, the Chamber quietly backed off the figure in its public statements. At a Washington press conference Wednesday morning unveiling the Chamber’s Campaign for Free Enterprise, Chamber officials repeatedly cited a membership of 300,000. That’s a tenth as many members as the Chamber claimed a day earlier, when a press release for the Washington event said the Chamber represented “more than 3 million businesses and organizations of every size, sector, and region.”

Since 1997, the “3 million” figure has appeared in print more than 200 times in newspapers and broadcast outlets of all sizes, including, in the past year, the New York Times, the LA Times, the Boston Globe, the UK Guardian, the Associated Press, Roll Call, Congressional Quarterly, and National Public Radio. By contrast, the 300,000 figure, which appears nowhere on the Chamber’s website, is cited in the news database Lexis-Nexis only three times–infrequently enough to be mistaken for a typo. The smaller number was used on October 9th by CNN, November 12, 2008 by the Denver Post, and August, 2003 by the Journal of Public Affairs. After getting the membership number correct, the Denver Post joined the rest of the media this April, describing the Chamber as “a business advocacy group with more than 3 million members.”

As Mother Jones detailed on Tuesday, the Chamber’s assertion that it represents “3 million” businesses is most likely based on claiming the membership of 2,800 state and local chambers of commerce as its own. But while local chambers are often dues-paying members of the US Chamber, they aren’t chartered or controlled by it, nor does membership grant them a say in electing its leaders or setting its policies, which are determined by a self-appointed board composed of large companies. Moreover, local chambers do little to support the national group financially. The Greater New York Chamber of Commerce pays annual dues to the US Chamber of only $1000. That means the 2,800 local chambers probably contribute less than 3 percent of the US Chamber’s $100 million budget.

As recently as 2001, before the the US Chamber fully embraced its accounting gimmick, it claimed only 150,000 corporate members.

There is, of course, a semantic difference between claiming to “represent” 3 million businesses and claiming those businesses as members. Yet the distinction has been lost on the media and even occasionally on the Chamber itself. “We have over 3 million members, and we don’t comment on the comings and goings of our membership,” Chamber spokesman Eric Wholschlegel told the New York Times last month in a story about the utility PG&E’s departure from the Chamber over its climate policy. After three more high-profile companies quit the Chamber, the LA Times wrote, “The US Chamber of Commerce touts itself as the world’s largest business federation, boasting 3 million members. Err, make that 2,999,996.” The Times‘ math would have been correct, if it had subtracted another 2,699,996 companies.

Even when granting the US Chamber its semantic tricks, it’s not certain that local chambers are comfortable with its “3 million” number. “They don’t represent me,” Mark Jaffe, CEO of the Greater New York Chamber of Commerce, told me Tuesday.

Chamber leaders seem to agree, given their decision to scale back their membership number by 90 percent today. The question is when the rest of the media will notice. Ignoring the Chamber’s new number, an AP story on the Chamber’s press conference, published Wednesday afternoon on the website of the Washington Post, said “the Chamber of Commerce claims a membership of 3 million businesses and organizations.” The number most likely came from the Chamber’s original press release. The Sierra Club promptly wrote to the AP asking for a correction.

Here are 17 other news organizations that have reported the “3 million” number since 2008: