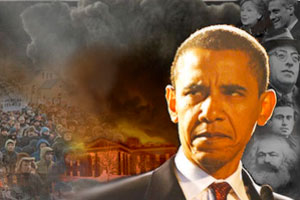 It’s January 2011. The GOP is about to assume control of both houses of Congress—having been voted in by a public deeply suspicious of Democrats after President Barack Obama conducted clandestine talks with President Felipe Calderon of Mexico and Prime Minister Stephen Harper of Canada. But two days before the new conservative majority is to be sworn in, Obama announces that this Congress will not be seated, that the United States (a creation of “racists and warmongers”) will be replaced by a North American Union, that the US Constitution will be dissolved, and that private ownership of firearms will be outlawed (as part of a United Nations treaty banning firearms globally). In response, millions rise up, and the Revolution begins.

A Glenn Beck movie project? Perhaps. But it’s also the premise for a new online computer game hosted by a website called United States of Earth.

In the game’s scenario, 20 million armed American “patriots” begin seizing local and federal government offices. These are the same people whose earlier Tea Party protests had been ignored and dismissed by the mainstream media. Now, they post bounties for government employees. There’s fighting in every state. Meanwhile, Lou Dobbs has been disappeared, and Glenn Beck has been found dead of an “aspirin overdose.” Rush Limbaugh, Michelle Malkin, Sean Hannity, and Bill O’Reilly have been rounded up, and Fox News forcibly shut down. The US military refuses to come to Obama’s rescue. His loyalist forces of 40,000 end up controlling merely three counties in Virginia, while an allied force is in charge of three counties near Washington, DC. The Federal Reserve also controls two of its own counties, as does the Cong (the remnants of the Democratic Congress). A collection of pro-Obama black nationalists and Islamic fundamentalists have a hold on two counties. What can you do as a player? You can join the patriots trying to capture Obama and defeat the Cong.

The website notes that this rudimentary World of Warcraft-type multiplayer game—titled “2011 Obama’s Coup Fails”—is merely “an action-packed, satire-filled” entertainment. But it does say, “If current events keep transpiring as they are, then 2011 Obama’s Coup may in fact become a dark chapter in American History.”

This game, though, is no right-wing plot to foment anti-Obama paranoia. Its organizers—who are not identified on the site—are a small group of Ron Paul-loving libertarians living in Brooklyn, according to Michael Russotto, one of this band. He insists the game’s designers and editors are not advancing any partisan agenda and that this anti-Obama scenario is one stunt they’ve devised to bring people into their larger “United States of Earth” project, in which players build their own empires and try to “dominate other members’ regimes across real-world maps.” According to Russotto, the site’s designers despise Democrats and Republicans, and they will show their political balance next week, when the site introduces an “Ambush Bush” scenario, which will give players the chance to hunt down the ex-president in Texas.

Why did the site kick off with an anti-Obama narrative? “For the most publicity,” remarks Russotto, who says he’s 40 years old but who won’t provide any information on his background or previous work experience. (“I don’t want anyone coming after me,” he remarks.) Russotto notes, “There’s a lot going on with Fox, the White House, and we wanted to capitalize on that.”

The site certainly has attracted people brimming with anti-Obama rage and has become a platform for their anger. A mock news feed on the site written by unnamed players contains a series of right-wing fantasies. Michelle Malkin writes the Second Declaration of Independence. Rep. Barney Frank, the “banking queen,” escapes the people’s militia “dressed as an ugly hag.” The pro-Obama forces are responsible for mass graves. The “almost illiterate” Rep. Maxine Waters hides out “with the poor in the shanty town she helped create due to the fake Global Warming, Health and other various Communistic bills.” Hillary Clinton is captured after trying to use children as a human shield. Sarah Palin attacks “several Hamas warriors” working with Rahm Emanuel. Barack Obama proclaims himself “the Legendary Lost Imam.”

It’s mostly juvenile stuff for sophomoric Obama foes. But a libertarian message is included in the mix. As the Obama forces are being squashed by patriots, Rep. Ron Paul is running for president and actually in a position to win. “We faced total collapse at the hands of the fascists in both parties and finally America is waking up to that fact,” Paul tells supporters. “It is unfortunate we had to lose thousands of lives across our great nation to get to this realization.”

Russotto says that already the game has thousands of players, and that he and his partners hope they can eventually make money off it. (Players join for free, but they can pay for additional assets to use when they play.) He promises that the forthcoming anti-Bush version will be cheered by Huffington Post readers. For now, though, the site is a right-wing wet dream. It is indeed another indication of how Ron Paul devotees can be imaginative. But the notion that Paul can become president may be the most far-fetched fantasy of their entire enterprise.