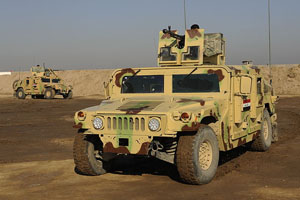 This story first appeared on the ProPublica website and is part of ProPublica’s ongoing coverage of injured war zone contractors.

The Labor Department has launched a series of changes to improve the controversial federal system designed to provide medical care and disability benefits to civilian contractors injured in war zones, department officials say.

The agency has stepped up enforcement, set new goals to speed delivery of benefits and begun tracking the performance of the insurance carriers that sell the highly lucrative policies for war zone workers, a senior official said.

The department is “reaching out to the carriers who are on the front lines to get them to perform at a higher level,” said the official, who declined to be named because he was discussing internal issues. The department will “start collecting data so we can show who’s doing well and who’s doing not so well.”

A joint investigation we did with ABC News and the Los Angeles Times showed that civilian contractors’ claims for medical care and disability payments were routinely denied by insurers. Another investigation by us showed that foreign workers often received no payments at all, though taxpayers had paid premiums to cover their injuries.

The Labor Department oversees the system, which requires defense contractors to purchase workers’ compensation insurance for employees in war zones. The insurance giant AIG dominates the market for such policies, which earn as much as 40 percent profit in some cases. Taxpayers have paid more than $1.6 billion for the policies, which are required by a law known as the Defense Base Act.

Labor officials plan to hold informal meetings to settle disputes between insurers and injured contractors  within 14 days of a request; it takes about 45 days now.  But it remains unclear whether speeding the process will quickly resolve disputes. The meetings hold no legal weight, and the insurers and the contractors  are free to ignore recommendations made by Labor Department examiners.

The department will also begin collecting data on how quickly insurers pay out claims. Without that information, the department has been unable to measure their  performance.

Labor and Defense Department officials also met late last month to discuss broader reforms to the system, the Labor official said. The discussions follow a Pentagon report in September that suggested the government provide its own insurance to cover contractors, at a potential annual savings of $250 million. The system has ballooned in size and cost as civilian contractors have flooded into Iraq and Afghanistan.

“We believe there’s a need for reform,” the official said. “DOD has indicated they believe so as well. Now it’s a matter of getting together and figuring out how to build something.”

The Labor Department’s efforts come as legislators consider new legislation to address flaws in the system.

Rep. Elijah Cummings, D-Md., held a hearing on the system this summer and had planned to introduce fixes in a bill this year. But he now plans a larger effort to include the Defense Department suggestions, a major legislative undertaking that will probably not take place until next year, according to a Hill staffer.

“I read the report from the Department of Defense with great interest, and I have directed my staff to alter the bill, taking into account this new information.” Cummings said. “The opportunity to keep our civilian contractors protected, while saving the government hundreds of millions of dollars, is one we cannot ignore.”