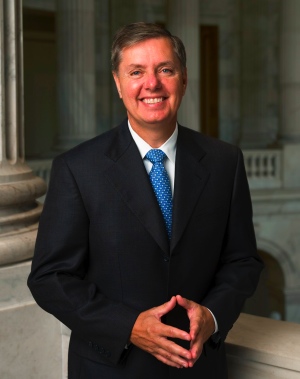 While I was en route back to the US over the weekend, Washington saw what may well be a game-changer on climate legislation, as Lindsey Graham (R-SC) officially endorsed the Senate climate bill.

In an op-ed in the New York Times on Sunday, Graham joined with bill author John Kerry (D-Mass.) to support passing climate legislation this year. They write:

[W]e refuse to accept the argument that the United States cannot lead the world in addressing global climate change. We are also convinced that we have found both a framework for climate legislation to pass Congress and the blueprint for a clean-energy future that will revitalize our economy, protect current jobs and create new ones, safeguard our national security and reduce pollution.
Our partnership represents a fresh attempt to find consensus that adheres to our core principles and leads to both a climate change solution and energy independence. It begins now, not months from now—with a road to 60 votes in the Senate.

Of course, the op-ed does make it clear that there are some things to be worked out, as the bill remains in draft form. Graham is a big nuclear proponent, so the extent of nuclear support in the final bill will be key. It’s also key for other Republicans who are possible “yes” votes, like his close ally John McCain (R-Ariz.), Lamar Alexander (R-Tenn.), and Johnny Isakson (R-Ga.).

They also pledge to work out the details on keeping dirty energy sources in the mix, noting that “we must recognize that for the foreseeable future we will continue to burn fossil fuels.” The US, they write, “should aim to become the Saudi Arabia of clean coal,” and there should be a compromise on additional on- and offshore oil and gas exploration.

While it’s not totally clear yet whether this will in fact be the Kerry-Boxer-Graham bill, the South Carolinian’s willingness to publicly endorse it is huge. The endorsement is notable because Graham is not a Republican that many expected to be a “yes” vote, like Susan Collins or Olympia Snowe of Maine. He voted against the McCain-Lieberman Climate Stewardship Act in 2003 and 2005, and has never been particularly vocal on this issue. His desire to participate in the formation of the bill may liberate more Senate Republicans to participate in the dialog.

Whether he can bring along other Republicans remains to be seen, but most importantly he puts pressure on the fence-sitting Democrats to participate in the debate. Graham is demonstrating a willingness to engage, while a significant number of Democrats are still hoping the issue will go away. All those moderate Democrats in middle America—folks like Evan Bayh (Ind.), Kent Conrad (N.D.), Byron Dorgan (N.D.), Blanch Lincoln (Ark.), and at least 13 others—have been hoping they won’t have to vote this year. Graham’s endorsement  provides them some cover to go ahead and vote for a bill.

And while the weekend’s op-ed does increase optimism about the bill currying enough support to pass, it’s still not clear whether that will happen this year. Though Kerry and Barbara Boxer (D-Calif.) indicated that hearings on the bill would begin in mid-October, there’s still nothing on the calendar. It’s looking like they won’t even begin committee debate on the bill until November, which would significantly impair the chances of passing a bill before the international climate negotiations in December.