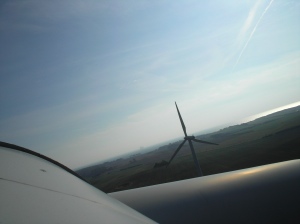 When trying to prove that a country can switch entirely to green energy, it’s best to start small. Denmark decided to start really small with Samsø, an island that lies 9 miles off the Jutland Peninsula. Just 4,100 people live on the island, which over the the course of 10 years has converted almost entirely to fossil-fuel free energy.

The project started in 1997, with the goal of becoming entirely self-sufficient and carbon-neutral. Today, wind provides 100 percent of the island’s electricity, generated from 11 turbines on land. Each turbine can generate enough power for 600 homes. Another 10 turbines just offshore send power to the mainland.

They’ve also made significant headway on other energy needs, with 65 percent of home heat now generated by four biomass burning facilities—three straw-burning plants and one solar power/woodchip combination facility, owned cooperatively by the local communities. Another ten percent of homes on the island have switched away from oil-based heating to wood pellet, geothermal, or solar heating. There are also pilot projects on biofuels and grasses for home heating. Some homes are still heated with oil, and their automobiles, tractors, and ferries to the island are all of course powered by petroleum products, but the amount of energy exported to the mainland from the offshore turbines is greater than the amount they need to import at this point.

It’s an impressive accomplishment, though one that would be nearly inconceivable in the United States thanks to the (in my opinion, utterly bizarre) opposition to wind farms in many regions and our complex regulatory and utility structure that in most parts of the US would make a project like this simply impossible. And of course there’s the problem of scale. What can be done on an island of 4,100, or even possibly expanded out to a country of just 5.5 million, would be a much greater challenge in the US, a country 65 times the size. And the project required a roughly $90 million investment—no small sum, considering the size of the population.

What struck me most about the day’s excursion, though, was the insight into what motivated the island to take this on, and what has driven residents to support the program. Our guide for the day was Jesper Kjems, the communications officer at Samsø Energy Academy, who discussed exactly how the island came to back such an ambitious project. A major key, he said, was getting farmers to buy in. Now, in addition to strawberries, pumpkins, and potatoes, they can also sell straw to the district heating facilities. And they have invested in the wind turbines as well.

The citizenry has also bought in. The district heating facilities are a cooperative, and members get heat at discounted rates. And 450 island residents own shares in one of the wind turbines as well. There are also major tax incentives; the first $600 dollars Danes make off wind power each year is tax free, a big deal in a nation as heavily taxed as Denmark. “We made it very easy for people to participate,” said Kjems. “So when we talk about renewable energy, they like it.”

What struck me was that Kjems didn’t talk about the project as a job-creator. This is the biggest argument for a clean energy economy in the US, at least if you listen to our political leaders. But in practice on Samsø, there hasn’t been significant job growth. Most of the turbine parts had to come from elsewhere, and after installation, they don’t require much manpower. The straw-burning district power plant we visited was almost entirely automated. Farmers and investors have profited from the project, but that was not how they framed the benefits.

Instead, Kjems also listed a number of other virtues that enticed residents to support the project, from the ability to meet emissions reductions goals to lofty ideals of independence, self-determination, and pride in the local economy. Those are perfectly sound goals, I believe, but probably easier to create solidarity around on a tiny island than, well, any place else.

I would also note that this was the closest I’ve ever come to functioning wind turbines. I’ve seen blades on display and I’ve seen them operating in the distance, but they actually let us climb up to the top of the 50-meter titans and inspect the inner workings. They were both much larger, and much quieter, than I anticipated. But the machinery inside the turbine is, by comparison, compact and fairly simple. Having grown up near a nuclear plant and spent time around coal-burning power plants, I can’t imagine who would find these more offensive in some way.

Kate Sheppard is blogging this week from Denmark. The trip for U.S.-based journalists was arranged by the Climate Consortium Denmark.