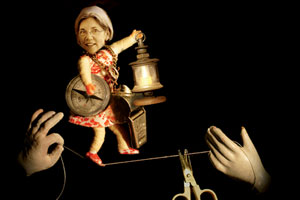 BY HER OWN reckoning, Elizabeth Warren had two transformative experiences on the way to becoming official Washington’s most unconventional expert on the financial industry. Let’s start with the second. It was 2003, and Warren, an earnest-sounding and ever enthusiastic Harvard law professor who specializes in bankruptcy, was on the set of Dr. Phil. She had written a book with her daughter called The Two-Income Trap: Why Middle-Class Mothers & Fathers Are Going Broke, and she’d expected to sit next to the host and explain its key points. Instead, Dr. Phil was interviewing a stressed-out couple with serious medical and financial troubles. After they mentioned they had obtained a second mortgage to pay off their credit card debt, the lights went up on Warren, and Dr. Phil asked her if this had been a smart step. No, she declared, because now they could lose their home if they defaulted.

As soon as her turn was over, Warren found herself thinking, “You’ve been doing this work for 20 years now, and it is unlikely that any of it has had as direct an impact as these 45 seconds.” She had reached millions, some of whom might actually pay attention to her advice. “So here you are, Miss Fancy-Pants Professor at Harvard. What do you plan to do now? Is it all about writing more academic articles, or is it about making a difference for the families you study? I made a decision right then: It was for the families, not the self-aggrandizement of scholarship.”

Six years later, Warren is applying that people-first philosophy by simultaneously running the Congressional Oversight Panel, which monitors the $700 billion TARP bailout program on behalf of the taxpayers, and pushing for a new agency to protect consumers from predatory lenders. Now, as Congress seriously considers her proposal (and lobbyists maneuver to kill it), the question is: Can a middle-class populist in Ivy League garb change the world—or at least Big Finance?

Warren, 60, grew up in Oklahoma in what she terms “modest circumstances.” Her father was a maintenance man; her mother worked for Sears. After graduating early from high school, she headed to college on a debate scholarship. Eventually she landed at Rutgers’ law school, where she admits starting out somewhat clueless: When a fellow student asked if she would try out for the law review, she didn’t know if he meant a magazine or a theatrical show. “All I knew was, if the smart kids were doing it, count me in.”

She graduated in 1976, with no job lined up and nine months pregnant with her second child. Soon she’d started her own practice, handling wills, real estate closings, and the like. Later she taught nights at Rutgers, and then found a position at the University of Houston’s law school—one of the first women ever hired there, she says, and the first who was not married to a faculty member. She began teaching bankruptcy law. “Bankruptcy,” she says, “is about economic death and rebirth, a story of failure but survival, how people come back, how businesses come back. It’s an American story.”

It was around this time that Warren had her other epiphany. Conventional wisdom held that bankruptcy law was too friendly to debtors, and she shared that view. So she teamed up with two other academics to conduct research that, she thought, “would expose those crafty debtors exploiting loopholes in the law.” To her surprise, the study—one of the largest of its kind—demonstrated that most bankruptcies were filed by struggling workers dealing with the loss of a job, a medical problem, or a family breakup. “It changed my vision not only of the bankruptcy system, but of the American economy,” she says. “It put me face-to-face with hundreds of thousands of people who worked hard and played by the rules, but a pink slip, a bad diagnosis, or a spouse who ran off had left them in economic shambles.” From that point on, Warren focused on how financial policy and law affected folks at the kitchen-table level, and by 2005 she was testifying on the Hill against legislation sought by credit card companies and the financial sector—and eventually passed by Congress—that made it tougher to file for bankruptcy.

Her passionate advocacy for family-friendly economic policies caught the eye of Sen. Harry Reid (D-Nev.), who’d disagreed with her on the bankruptcy bill. “He was struck by her articulate views on pro-consumer issues,” a spokesman says, and so, last November, Reid appointed Warren to the TARP panel.

Shuttling between Cambridge and the panel’s offices in DC—tucked away in a corner of the Government Printing Office—Warren broke the mold of the typical government commission. Instead of endlessly studying the issue before producing a bland, predictable doorstop of a report, the panel would publish a to-the-point, easy-to-comprehend assessment of a different slice of TARP each month. One of the reports revealed that the Treasury Department had paid $78 billion more than market value for the assets it purchased from banks. Another said that despite the hundreds of billions of dollars spent on the bailouts, the financial system is still polluted by toxic assets that could trigger another meltdown. And the September report found that taxpayers might not recover up to $23 billion in TARP funds doled out to Chrysler and GM. Warren herself has done her part to publicize her panel’s work, delivering testimony to Congress and appearing widely in the media (on The Daily Show, Jon Stewart inquired whether she had “powers to crush” companies that had gotten sweetheart deals from TARP), often bluntly taking Treasury to task for failing to make its programs transparent. At one point she told lawmakers that “Congress and the American public have no clear answer” from Treasury regarding its overall TARP strategy.

“She’s done a great job calling attention to the Treasury’s failing in ensuring that the taxpayers get a fair deal,” says Dean Baker, codirector of the Center for Economic and Policy Research. “That really is extraordinary in DC.” Nobel Prize-winning economist Joseph Stiglitz remarks, “What she is doing is making a lot of people very uncomfortable.”

Indeed. In April, Thomas Cooley, a Forbes columnist, blasted Warren for politicizing the oversight panel to advance an anti-bank agenda, and one of the five-person panel’s two Republican members, Jeb Hensarling, has criticized her for focusing the commission’s work “on issues not central to our mandate.” He also pushed for releasing the transcripts of the panel’s private meetings, a move that Warren resisted because, a spokesman says, the members need to have “candid discussions” about their ongoing investigations.

Beyond monitoring how the government is mopping up after the financial crisis, Warren is pushing a proposal that could help prevent the next one: creating a Financial Product Safety Commission to protect consumers from abusive lenders. Mortgages and credit cards, she wrote in a 2007 journal article about the proposal, “should be subject to the same routine safety screening that now governs the sale of every toaster, washing machine, and child’s car seat.”

Straightforward as that sounds, it would represent a fundamental shift. “Regulating financial products based on fairness, simplicity, and appropriate risk is an entirely new paradigm,” notes Reid Cramer, director of the New America Foundation‘s asset building program. In the wake of the financial meltdown, the idea has gained traction in Washington, thanks in part to Warren’s plainspoken advocacy. “Almost unique among people with deep financial insight, Professor Warren speaks a language that ordinary people can easily comprehend,” says Laurence Tribe, a colleague at Harvard Law. For example, when testifying before a congressional committee in June, Warren summed up the shift in banking this way: “Today’s business model is about making money through tricks and traps.”

Warren’s proposal, of course, terrifies the finance industry, and with the White House vowing to push for it and Congress expected to start hammering out legislation, lobbyists have been preparing for battle. The American Bankers Association has proclaimed its opposition. Bill Himpler, executive vice president of the American Financial Services Association, says Warren’s commission would “take us essentially back to the 1970s, where we had double-digit interest rates…and one-third the consumer credit available that we have now.” Earlier this year, the Republicans on the Congressional Oversight Panel, Hensarling and former Sen. John Sununu, dissented from a panel report that called for the new watchdog, arguing that it “could well undermine the health of banks.” In June, financial policy analyst Jaret Seiberg said that the industry’s worst nightmare is that should Congress create such an agency, Warren would run it.

Does she want the position? “I have a job I love,” she says. And while Warren would be a natural choice, she may not be a shoo-in. One senior Obama economic adviser told me that Lawrence Summers, the national economic adviser, “has a thing about her”—meaning he’s not a fan. (The White House did not respond to a request for comment from Summers.) For her part, Warren says that she and Summers are friends, and a source familiar with their relationship characterizes them as sparring partners. “They’re like two tennis players at Wimbledon: energetic, uncompromising. But they’re adversaries, not enemies. When they put down the tennis rackets, they can still go out for a drink.”

But a Warren colleague at Harvard (who admires her) notes that Summers—who as Harvard president speculated that women may not have the same innate math and science ability as men—might share the sentiments of fellow Harvard economists who dismiss Warren as insufficiently theoretical. “They think she shouldn’t be talking about bankruptcy except as someone in the economics department would—that is, with formulas and theorems, not about how it affects real people.” In Washington, though, that skill—explaining how grand financial concepts affect real-world families—may prove Warren’s greatest asset. As she once put it on The Rachel Maddow Show, her rule for financial products is very basic: “If you can’t explain it so the person on the other side can understand it, then you shouldn’t sell it to them.”