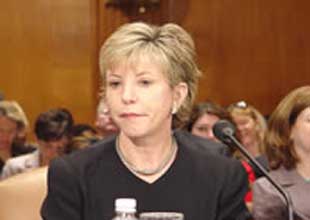 What kind of health care coverage does the nation’s top health insurance lobbyist have? Her trade group refuses to say.

Karen Ignagni is the health insurance industry’s main defender in Washington. As the president and CEO of America’s Health Insurance Plans (AHIP), the industry’s lobby, she represents all the big insurance companies: WellPoint, Aetna, UnitedHealth, and CIGNA, among others. As such, she’s one of the leading opponents of the so-called public option—a proposed government-run health care plan that would compete with private plans as a way of lowering costs. AHIP recently organized 50,000 insurance company employees to fan out to congressional town hall meetings to fight the public option, which the industry views as a major threat to its bottom line. They recognize that without having to pay enormous executive salaries or hire corporate jets, the government-run plan might be cheap enough to steal away a big chunk of their business.

But despite Ignagni’s role as what some lefties might consider the Darth Vader of health care reform, she has not launched World War III on President Obama’s health care reform plan. Instead, she’s taken a more conciliatory approach, getting the industry to take a seat at the table and adopting the strategy of trying to shape the legislation to her liking rather than seeking to block it outright. She’s promised that insurers will stop denying coverage to people with preexisting conditions and will end a bunch of other heinous but common practices. (Of course, any reform plan that includes a mandate for people to buy insurance is good for insurance companies, as it brings in more paying customers.)

A former Democratic Hill staffer and union official, Ignagni sounds eminently reasonable on TV and in interviews when she talks about how important it is to make sure all Americans have access to health insurance. But hearing Ignagni wax poetic about the need to fix health care has often made me wonder just how much experience she’s had as a consumer of the products sold by the companies she represents. As someone with a $2,000 deductible, I had questions, like: How high are Ignagni’s own deductibles? What are her maximum out-of-pocket costs? Does she have to get a referral before she can see a specialist? What’s her copay and can she pick her doctor?

So last week I inquired about her insurance coverage. I started by putting my questions to AHIP spokesman Robert Zirkelbach, one of Ignagni’s gatekeepers. The response? “Politely, no, I don’t think we’re going to get into that.” In flack-speak, he gave me a lecture on how “the issue here is that everyone here needs to have access to health care.”

I asked him, politely, if he would send my questions up the food chain so that Ignagni could answer them directly, even if that answer was “no comment.” But Zirkelbach declined. “The person you are talking to is me,” he said. I thanked him for his time and mentioned offhand that he might be risking the ire of Ignagni, the woman who pledged AHIP’s commitment to passing health care reform, but Zirkelbach was unmoved. “We’re not going to get into the benefit packages of AHIP employees,” he said, ending our conversation. Five minutes later he called me back to add that all AHIP employees have the same choice of benefit packages. What those are, he didn’t say.