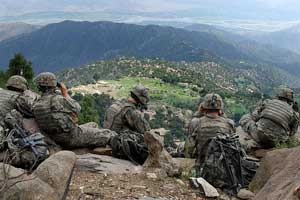 With the war in Afghanistan, President Barack Obama faces a contradiction. He says he wants to win the war but he will not commit to fighting for as long as that might take.

This tension between policy and rhetoric was on full display in the White House briefing room earlier this week. On Monday, press secretary Robert Gibbs was asked repeatedly about Afghanistan and the strategic assessment that had just been completed by Gen. Stanley McChrystal, the top US commander there. Gibbs noted that Obama had yet to see McChrystal’s review, but he said over and over that the Afghanistan war had been “under-resourced” for years by the Bush-Cheney administration and that “it takes a long time to implement” a change in strategy. Asked if the situation in Afghanistan was spiraling out of control, Gibbs replied that McChrystal’s review had concluded “the situation is quite serious but the war is indeed winnable.”

Later during the briefing, I asked Gibbs to define “winnable.” He answered:

The President and his advisors have talked about disrupting, dismantling, and destroying al Qaeda and its extremist allies. We have to ensure that there are— while there are those currently plotting to do our country harm, that we don’t provide them a safe haven to do that; that we have a government in Afghanistan that is self-sufficient, that we have a security force in that country that’s able to deal with the challenges that are presented to it.

But without being prompted, Gibbs added this statement: “Our commitment can’t be forever.” I followed up by asking, “How can you say the commitment is not forever if you set up those goals? Maybe it will take close to forever to reach those goals.” Gibbs responded:

I don’t think it will take close to forever. But I don’t know what year that would be.

So Obama has established high benchmarks for victory in Afghanistan—particularly, a working government and a functional military that can handle the Taliban and other challenges. But the White House maintains that the president’s commitment in Afghanistan will not be without an end—without specifying when that end might be. The tasks Gibbs outlined could well require many years to accomplish—that is, if they are even achievable. Yet with polls showing decreasing public support for the war, Obama is not pledging to stay in Afghanistan until these objectives are met.

That leads to an obvious question: if the goals are critical to the security of the United States, shouldn’t they be pursued until the job is done? It seems as if Gibbs was almost saying, We’ll give this a shot and see what happens. Which, of course, is a formulation Obama cannot voice—even if it reflects the true sentiment at the White House.

Obama is in the awkward position of hard-selling the war–we must do this, this and this–while downplaying what all this could entail. It’s a rhetorical balancing act that could end up being tough to sustain. And it’s slightly reminiscent of what the Bush-Cheney gang tried to pull off when they were pushing the case for invading Iraq.

The politics of the war are becoming more dicey for the Obama administration. Liberal Democrats are increasingly concerned about the deployment of additional troops (and McChrystal may soon ask for even more soldiers), and when columnist George Will wrote this week that US forces in Afghanstain should be “substantially reduced,” he signaled the possibility of opposition from the right. (There is indeed the potential for a left-right coalition against the war.) For the time being, Obama’s most reliable supporters on the war are congressional Republicans. This poses a dilemma for him: can he simultaneously keep Democrats from open rebellion by promising that Afghanistan won’t turn into a Vietnam-like sinkhole, while preserving GOP support by standing firm on the war?

Speaking about McChrystal’s assessment, Adm. Michael Mullen, the chair of the Joint Chiefs of Staff, on Thursday said that “time is not on our side.” But he did not say why. Given what the polls indicate, the public is losing patience. Yet the mission in Afghanistan, as defined by Obama, will take loads of time. How Obama deals with this friction could end up shaping his presidency more than his handling of health care reform.