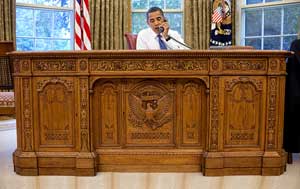 “It had better be wrong.”

That was the response of Representative Jerrold Nadler (D-NY) to Wednesday’s Politico story  that the Obama White House, as it retools its strategy for health care reform, has no intention of fighting for the inclusion of a public option that would offer government-run health insurance to companies and people who can’t obtain affordable coverage elsewhere. And Jacob Hacker, a health policy expert who can be called the godfather of the public option, says, “The White House…has to be told in no uncertain terms that dropping the public plan is stupid and premature.”

The Politico piece did not quote by name President Barack Obama or his senior advisers saying they were dumping the public option from their must-include list. So it’s possible this was a trial balloon that could burst. But even though Obama had already declined to vow he would go to the mat for a public option, the story did rile up progressives on and off Capitol Hill.

“Without a public option, this bill will do a lot of nice things but only by throwing a couple hundred billion dollars at insurance companies,” says Nadler, adding that a public option is necessary to hold down the cost of health insurance. “What is the point of passing a bill that mandates people to buy insurance that is going to be unaffordable?” he says.

Nadler insists that a bill lacking a public option cannot pass the Democratic-controlled House, noting that in July, he and fifty-six other House Dems sent a letter [PDF] he had drafted to House Speaker Pelosi declaring they would not vote for health reform legislation without a public option. (At the moment, it looks as if there’s practically no Republican support for any health care reform measure that might be crafted by House Democrats.)

Though a public option can likely make it through the House without much assistance from Obama, Nadler notes points out that no such bill could succeed in the Senate absent pressure from Obama. If Obama doesn’t make an effort, Nadler says, “I believe it will cause a very big split” in the Democratic Party.

Off Capitol Hill, progressives pressing for health care reform with a public option immediately began calling contacts in the White House to register objections. “We’ll make our feelings known privately first,” one says. “Then we’ll come up with a public strategy.” In an email to me, Hacker maintained that retreating on the public option will buy the White House nothing:

Haven’t Democrats learned to stop preemptively negotiating with themselves? Let Democrats work the issue out in the House and Senate caucuses (that’s where any deal will be made, because there will be virtually no Republican support for any element of the President’s proposals). Meanwhile the President should push for the public plan.

Hacker noted that Obama had already

offered the Right an olive branch when he suggested he might prefer coops to the public plan, and the Right basically immolated the olive branch….I don’t know what he gets by backing off. The public is supportive. The non-Maine Republicans will vote nay no matter what. And the wavering Democrats will probably go along, or at least not filibuster legislation over it — if the President sticks to his guns.

“From a progressive point of view,” Nadler says, “we’ve already compromised five or six times.” He cites liberal Democrats’ willingness to give up on a single-payer approach and to agree to several restrictions on a public insurance plan. But he acknowledges that voting against a bill without a public option will be a “test” for progressive Democrats: “A lot of them have said they will vote against such a bill, but will they?”

What of the argument that the House Dems should not permit the perfect to be the enemy of the good? Isn’t half a loaf better than none? “I am convinced,” Nadler remarks, “that you can’t take a loaf without the public option because that’s not sustainable, with the costs going up. If we did this, what will we accomplish in the end?”

On Wednesday afternoon, the news broke that Obama will deliver a major address on health care to a joint session of Congress on September 9. Now that it’s crunch time, that speech could signal what Obama will actually be fighting for in the weeks ahead. If the president bails on the public option, Nadler warns, Democrats should prepare for a family feud that sure won’t be pretty.