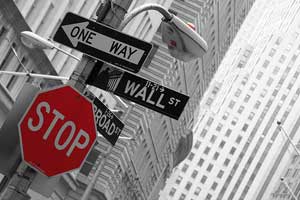 On Monday—one year after the once-mighty Lehman Brothers collapsed in the nation’s biggest bankruptcy—President Obama addressed the state of the economy and again outlined his proposals for what he calls reform. The location—Federal Hall at 26 Wall Street, near the New York Stock Exchange and New York Federal Reserve Bank—was fitting. George Washington took his presidential oath there, a precursor for how intertwined Washington and Wall Street would become. And Obama’s speech indicates that he’s still making the grave error of mistaking the health of Wall Street for the health of the American economy.

Obama chose not to deliver his speech on, say, the streets of Bend, Oregon, or Fresno, California, which provide different indicators of our economic predicament. That’s because Washington’s approach to the crisis has been to focus on the banking system, throw a few crumbs to citizens, and hope everything else will magically work itself out.

The problem with concentrating on the banking system is that it allows the administration to present an overly optimistic assessment of its actions. “The storms of the past two years are beginning to break,” Obama pronounced, attributing this to a government that “moved quickly on all fronts, initializing a financial stability plan to rescue the system from the crisis and restart lending for all those affected by the crisis.” He continued: “By taking aggressive and innovative steps in credit markets, we spurred lending not just to banks, but to folks looking to buy homes or cars, take out student loans, or finance small businesses. Our home ownership plan has helped responsible homeowners refinance to stem the tide of lost homes and lost home values.”

Those steps were certainly aggressive. Under both the Bush and Obama administrations, the government, from the Federal Reserve to the Treasury Department, has flushed the banking systems and other components of the financial markets with $17.5 trillion worth of loans, guarantees, and other forms of support. About another $1 trillion has been provided to citizens through the recovery package, first-time homeowner tax benefits, auto purchase credits, and approximately $800 billion to help guarantee the loans of certain lenders—which somewhat helps borrowers, but helps lenders more.

But these measures have hardly brought the economy back from the brink. They brought Wall Street back from capital starvation and prevented the possibility of more big banks going bankrupt—instead of the slew of smaller and mid-size ones that have since met the same fate as Lehman Brothers. Taking credit for stabilizing the financial system after feeding it with massive amounts of federal money is like a teacher bragging about turning around the academic performance of a failing student after handing them all the answers to the big tests.

Here’s how the economy is really faring (and how Washington is failing to take adequate steps to fix it):

Obama did acknowledge that the picture isn’t entirely rosy. He also outlined his ideas for avoiding another catastrophe: reshuffle the decks of regulatory agencies, slap a few trading constraints on some derivatives, and create a Consumer Financial Protection Agency (CFPA). But while Obama’s rhetoric was stern—”normalcy cannot lead to complacency,” he vowed—the proposals themselves are hardly sweeping.

Obama’s plan calls for eliminating the Office of Thrift Supervision and providing greater oversight by the Fed of “systemically important” institutions. The Senate is trying to water that down, in part because some members of both parties in Congress remain skeptical about the power of the Fed itself. The Senate also wants to consolidate regulatory authority into fewer entities, but leave oversight to a council of regulators. Of course, consolidating regulatory oversight only works if regulators are doing their jobs and the banking system is transparent enough to allow them to do so.

The last leg of Obama’s proposal would be establishing the CFPA, which would monitor financial products in an effort to protect consumers from risky instruments such as subprime mortgages. Legislation to create such an agency is expected to be taken up this year by the House Financial Services Committee, chaired by Rep. Barney Frank (D-Mass).

A strong CFPA is a sensible plan. Right now there is no other body imbued with the power not just to protect consumers but also to foster the general economic stability that would be achieved by closely monitoring the integrity of financial products. This proposal has drawn the most ire from the banking community, so you know it’s good. The Chamber of Commerce launched a $2 million ad campaign to convince people that a CFPA would mean that local butcher couldn’t extend credit to his customers without government interference.

But Obama’s reforms do not strike deeply enough. The banking crisis has been subdued, not fixed, because of enormous amounts of government assistance. Ignoring that fact, and failing to overhaul the sector, leaves us open to another crisis. And the next round will be worse, because there is now so much more federal money invested in the banks.

Simply funding the banking system without reforming it is an expensive and dangerous game. Obama is capable of truly fixing things—by dividing up the Wall Street mega-banks with a new Glass Steagall Act, thereby enabling the success of more extensive regulatory reforms. Or, he could introduce a set of cosmetic changes that allow banks to keep doing what they did before last year’s crisis and that put us on the path for the next one.