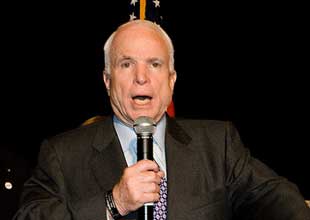 As the news broke that President Barack Obama was scrapping President George W. Bush’s proposal to place missile defense bases with yet-to-be proven technology in Poland and the Czech Republic and moving ahead with a mobile, partly sea-based system using existing technology, Senator John McCain became a leading critic of this decision. He decried Obama’s plan—which followed the recommendation of Defense Secretary Robert Gates and the Joint Chiefs of Staff—as “seriously misguided” and called it a cave-in to Vladimir Putin, the Russian leader who had opposed deployment of US missile defense systems in Eastern Europe.

The President’s general-election opponent, Sen. John McCain, R-Ariz., the ranking Republican on the Senate Armed Services Committee, told ABC News that he had not been briefed on the announcement, and he wasn’t exactly sure he knew what constituted the new more mobile system.

“I haven’t heard of it,” McCain said. The new system, he added, “is certainly unproven technology.”

But unlike the Bush system, which depended on a two-stage ground-based missile that was untested, the new system will be composed of elements already in the field and proven—and McCain should be quite familiar with them.

The core weapons in Obama’s missile defense proposal—designed to address regional ballistic missile threats in Europe (mainly a potential attack from Iran), not intercontinental missile attacks—are the sea-based Aegis missile-tracking system and the SM-3 interceptor missile. Both are currently in use on US Navy ships, including a destroyer called—wait for it—the USS John McCain, which was named after the senator’s father and grandfather, both admirals. This missile defense system was in the news earlier this year when North Korea was test launching a missile:

“I understand two Aegis destroyers, including USS John McCain, will continue to stay in the East Sea in apparent preparation for the North’s missile launch,” the [South Korean] official said, asking not to be identified.

USS John McCain is a 9,200-ton Arleigh Burke-class guided missile destroyer, which is equipped with the Aegis combat system that allows it to simultaneously track over 100 targets from more than 190 kilometers.

The destroyer also carries a multiple number of Standard Missile-3 (SM-3), which makes up the backbone of the United  States’ naval missile defense or MD system.

The use of the Aegis system and the SM-3 for mid-range missile interception has been extensively discussed by the members of the Senate Armed Services Committee, including McCain. In July Defense Daily reported:

The committee did make some tweaks to Obama’s missile defense request. For example, its bill proposes reducing by $30 million the administration’s $1.7 billion request for the Aegis Ballistic Missile Defense program and its SM-3 interceptor; the SASC believes all of the funds could not be executed. That $1.7 billion [Obama administration] request is a $600 million boost over FY ’09 funding.

At a June Senate hearing on missile defense, McCain himself publicly recognized that the Obama administration was heading toward greater reliance on the SM-3 for missile defense: “For some time now, this committee has urged the [Defense] department to increase its focus to rogue state in theater threats and I applaud the [Obama administration’s] decision to increase funding for both THAAD and SM-3.”

In his remarks to ABC News, McCain made it seem as if Obama’s proposal was all new to him and utterly untested. But that’s not so. Perhaps the possibility of using these elements for a European-based system was not on McCain’s radar screen. But he depicted Obama as proceeding recklessly—when, actually, it was McCain who had gone ballistic.