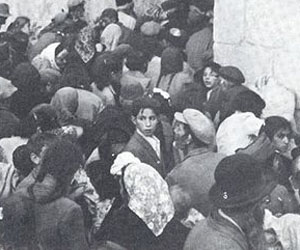 The timeline below is a companion to our print package describing the rise of moderate pro-Israel voices to counter the longstanding dominance of the hard-line American Israel Public Affairs Committee (AIPAC). It is not intended to be all-inclusive, but rather a chronicle of selected key events in the creation of the Israeli state and of the formidable lobbying efforts that have accompanied it in Washington, DC.

1881-1885—Pogroms in Russia spawn the first large-scale wave of Jewish immigrants to Palestine.

1896—Theodore Herzl, founder of modern Zionism, pens The Jewish State, predicting that a “wondrous generation of Jews will spring into existence.”

1897—Zionist Organization of America, which claims to be the nation’s oldest pro-Israel group, is established.

1913—Anti-Defamation League founded. Mission: Defeat anti-Semitism in the United States and put “an end forever to unjust and unfair discrimination against and ridicule of any sect or body of citizens.”

November 9-10, 1938—More than 250 synagogues and up to 8,000 Jewish-owned businesses in Germany are destroyed in what is later dubbed Kristallnacht (night of the broken glass); the riots inspire a new wave of Jewish immigration to America and the Middle East.

May 1939—The St. Louis is turned away from the shores of America and other nations with nearly 1,000 European Jewish refugees aboard. Passengers petition President Roosevelt directly to let them seek asylum, but get no reply; the ship returns to Europe.

January 24, 1940—The New York Times admits it had been reluctant to report on anti-Semitic atrocities in Germany because “all we have heard until now have been unofficial accounts of such horrors that we chose to disbelieve them as exaggerated.”

January 1941—A popular Nazi newspaper editorializes, “Now judgment has begun and it will reach its conclusion only when knowledge of the Jews has been erased from the earth.”

January 20, 1942—At the Wannsee Conference in Berlin, German High Command endorses the “final solution.” Its goal: Exterminate the Jews.

1941-1945—As many as 1.5 million Jews are murdered at Auschwitz, a Nazi concentration camp in Poland. In all, according to most estimates, the Germans slaughtered more than 6 million Jews during the war.

November 29, 1947—UN General Assembly approves a plan that separates Palestine into Jewish and Arab states, with Jerusalem shared by the state of Israel and the Palestinian leadership.

1948—Future Israeli Prime Minister Golda Meir travels to the United States, where she secures about $50 million to help defend Israel against foreseen attacks by its neighbors.

May 14, 1948—America is first nation to recognize Israel.

1949—Israel signs armistice with its neighbors—ends up with 50 percent more land than originally promised.

1953—The American Israel Public Affairs Committee is established. Its primary goal is to strengthen the relationship between the United States and Israel. AIPAC is now among DC’s most powerful lobbies.

1956—After John Foster Dulles, Eisenhower’s Secretary of State, gripes that he can’t keep track of Washington’s myriad Israel-advocacy organizations, like-minded groups concentrate their clout in a new coalition, the Conference of Presidents of Major American Jewish Organizations. The powerful Conference now represents 52 separate groups, primarily in their interactions with the executive branch.

1968—Palestinian National Charter declares Balfour Declaration “null and void,” explaining that “Judaism, being a religion, is not an independent nationality.”

October 1973—Yom Kippur War: Coalition of Arab states including Egypt and Syria invades Israel on the Jewish Day of Atonement. Israel suffers significant losses, but eventually regains all the land seized in the invasion.

1987—First intifada begins following rumors of Israeli attacks on Palestinian civilians in response to the killing of an Israeli soldier.

December 1987—Hamas founded as the political, Palestinian branch of the Muslim Brotherhood, an opposition party popular in most Arab states, particularly Egypt.

May 14, 1989—Israeli government approves temporary self-rule for Arab Palestinians in Israel by allowing elections in the Judea, Samaria, and Gaza districts as “a test for co-existence and cooperation.”

November 4, 1995—Prime Minister Rabin assassinated by a right-wing Israeli radical. In his final speech earlier that night, Rabin had declared, “I believe that there is now a chance for peace, a great chance,” and condemned the “enemies of peace who are trying to hurt us, in order to torpedo the peace process.”

May 17, 1999—Ehud Barak, leader of the left-wing Labor Party, elected prime minister. As a Mossad agent—later immortalized in the film Munich—Barak led an operation in Beirut to assassinate terrorists who had taken hostage and killed Israeli athletes at the 1972 Munich Olympics, dressing in drag as part of his cover.

March 2000—Syrian president Hafez al-Assad rejects an Israeli peace offer relayed to him by President Clinton. Syria’s VP explains that his country remains “committed to the peace process and the principles on which it is based” but says it cannot cede land to Israel because “any peace that hands over spoils to the aggressor is a defeat.”

May 24, 2000—After a 22-year occupation, Israel completes its withdrawal from Southern Lebanon in accordance with UN Security Council Resolution 425.

July 11-25, 2000—President Clinton, Arafat, and Barak fail to reach agreement at Camp David. In response to criticism that he had single-handedly stalled the peace deal, Arafat stressed that all parties “made mistakes.”

September 28, 2000—Palestinians riot after hawkish Likud leader Ariel Sharon visits Temple Mount. The riots lead to the Second Intifada; Palestinian cabinet accuses the Israeli military of opening fire “without warning and without justification in a planned attack” on demonstrations throughout the West Bank following Sharon’s visit.

February 6, 2001—As violence further flares up, Israelis elect Sharon, a hardline former general, as their new PM. A Palestinian negotiator criticizes the election and Sharon, declaring that “his kind of peace is no peace at all.”

November 2004—Arafat dies; as its new chairman, the PLO elects Mahmoud Abbas, an outspoken critic of the Palestinian uprising that began in 2000; he called the Second Intifada a “complete destruction of everything we built.”

September 2005—As Israel withdraws from Gaza settlements, Jewish settlers who refuse to leave are ousted by the military.

November 21, 2005—Kadima party established by centrist members of the Likud and Labor parties. Former Likud leader Ariel Sharon explained that he was “looking ahead and want to reach an accord, and later peace,” a task considered impossible for his hardline party.

January 4, 2006—Sharon suffers a massive stroke, leaving control of the government in the hands of Kadima’s Ehud Olmert—he officially takes over after Sharon dies some three months later.

January 26, 2006—Hamas defeats the rival Fatah party at the polls to take control of the Palestinian Legislative Council. An Iran Foreign Ministry spokesman praises the result as a sign of the “determination of Palestinians to continue struggles and resistance against Zionist occupiers.”

March 17, 2007—Palestinian Unity government sworn in, with leadership shared between Hamas and Fatah. Olmert and Israeli cabinet reject this new coalition, arguing that it sees “terror as a legitimate goal.”

June 12, 2007—More than 200 Hamas fighters surround Fatah headquarters and other sites in northern Gaza, killing 10 and ousting its more moderate rival from the territory, and from the Palestinian Unity government.

2008—J Street established as the “political arm of the pro-Israel, pro-peace movement” in a direct challenge to established Washington stalwarts like AIPAC.

December 2008-January 2009—Fed up with Hamas rocket attacks on its border towns, Israel invades Gaza. More than 1,000 Palestinians and 13 Israelis die in the three-week engagement.

April 1, 2009—Benjamin Netanyahu regains title of prime minister after forming a coalition with ultraconservative Yisrael Beiteinu leader Avigdor Lieberman—who in 2006 called for execution of any Arab parliament member who met with Hamas.

June 4, 2009—Speaking at Cairo University, President Obama calls on Israel to stop building settlements and declares that “the situation for the Palestinian people is intolerable.”

June 22, 2009—Morton A. Klein, head of the Zionist Organization of America, declares that President Obama could become the “most hostile president to Israel” in American history, adding his name to the list of influential American Jewish leaders critical of Obama.

Correction: An earlier version of this story erroneously stated that Britain and the United States declared war on Germany and Japan in 1941. Britain, in fact, had declared war in 1939.