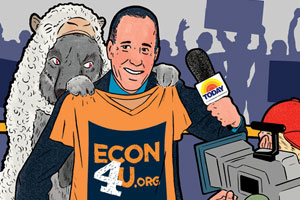 Early one morning in late April, as the Today Show broadcast live from Rockefeller Center, a group of onlookers gave Matt Lauer a T-shirt emblazoned with the Web address Econ4U.org. “Scored a T-shirt here from these folks promoting economic literacy, which is really nice,” the good-natured anchor said, displaying the shirt to nearly 6 million viewers. Little did Lauer know, but he’d been duped into providing that free advertising for a group that promotes payday lending—an industry long accused of preying on low-income Americans with short-term loans carrying huge interest rates.

Who pulled off this publicity stunt? Credit Richard Berman, one of Washington’s most notorious PR operatives, whose exploits Mother Jones and others have been chronicling for years. Nicknamed Dr. Evil—a moniker he embraces—he’s the force behind several industry-backed nonprofits that share staff and office space with his very for-profit communications and advertising firm, Berman and Company. The firm promises clients it will not “just change the debate” but “start” one, and a range of companies, from Anheuser-Busch to Philip Morris to the casino chain Harrah’s, have signed up for Berman’s “aggressive” and “hard-hitting” advocacy. Some clients pay Berman and Co. directly, while others donate to his nonprofits—but much of the cash winds up in the same place, via hefty management fees the front groups pay to Berman’s company.

Among Berman’s outfits is the Center for Consumer Freedom, which targets critics of fast food, alcohol, and mercury-laden fish. (Seen its commercial in which the “food police” yank an ice cream cone from a little boy?) Berman’s Employment Policies Institute campaigns against minimum-wage increases. And his Employee Freedom Action Committee crusades against unionization.

The Center for Economic and Entrepreneurial Literacy—the outfit plugged on Today—is one of Berman’s more recent creations. Its official mission is to advance “economic literacy.” CEEL’s surveys—designed to show that Americans don’t know diddly about finances and therefore deserve some of the blame for the current economic tumult—have been quoted on the nightly news and are frequently cited in newspapers. And CEEL has also promoted payday loans as a lifeline for desperate borrowers.

Berman’s groups are designed to appear like independent research or grassroots advocacy organizations—and a host of news outlets, from USA Today to the Wall Street Journal to the New York Times, have a bad habit of treating them that way. Don’t they google? “Berman plays the media beautifully,” says Melanie Sloan, executive director of the watchdog group Citizens for Responsibility and Ethics in Washington, which in January launched a campaign to spotlight Berman’s under-the-radar PR exploits. “The media rarely, if ever, check on the credentials of the Berman organizations.”

Such was the case last October, when Molly Hooper, then a reporter at Congressional Quarterly, relied on CEEL as a source in a story about the financial illiteracy of members of Congress. The article appeared a day after CEEL released a survey noting that 8 in 10 congressmen have no formal training in economics or business—a potentially potent argument for industry players seeking to call into question how lawmakers would handle the financial crisis. Hooper, who now works for The Hill, acknowledges that she didn’t research the group. “I’m going to be honest here: I don’t remember doing that,” she says. “I remember that I needed to find a group that had some understanding of how financially illiterate people are these days.” James Bowers, CEEL’s managing director, obliged with a cheeky quote: “Those who are responsible for solving the biggest economic crisis in generations don’t have the educational background to know the difference between commercial paper”—a form of corporate debt—”and copy machine paper.”

Given Bowers’ rhetoric, and his role as the head of a “financial education” organization, you’d think he’s some type of economic expert. In reality, the 1993 graduate of the University of Indiana-Bloomington (majors: political science and journalism) is the creative director of Berman and Company—an expert on advertising and marketing, perhaps. Nevertheless, media outlets (Bloomberg, I’m talking to you) quote him as a financial literacy authority, run his op-eds without noting his Berman and Co. connection, and reprint CEEL’s survey results, frequently indentifying the organization as a Washington “research” outfit.

There is no evidence that CEEL is bankrolled by the finance industry or payday lenders; Berman has said that the nonprofit is simply a pet project that “reflects the issues that I personally believe need to be addressed.” Yet some of its talking points are strikingly similiar to the ones that payday lenders have been repeating for years.

Again, the press has helped get out the message. In December, an AP business writer, describing CEEL as an organization that “advocates personal finance education,” wrote about the results of its latest survey: “Just a quarter of adults knew that overdrawing their checking account (bouncing a check) for a quick $100 was more expensive than a payday loan, credit card advance or emergency wire transfer. More than half said they thought a payday loan would be pricier.” (AP had no comment.)

“That’s the most frustrating part of this,” says Uriah King, who focuses on payday-lending policy for the Center for Responsible Lending, a nonprofit that works to protect consumers from abusive lending practices. (Berman’s Center for Consumer Freedom has blasted CRL as “the advocacy arm of a billion-dollar financial network,” since Herb and Marion Sandler, whose World Savings Bank marketed risky subprime loans, helped to found the nonprofit.) Through the press, says King, CEEL and other Berman groups are able to influence the debate without the public ever knowing they’re hearing industry spin. “It just becomes part of the zeitgeist, part of the conventional wisdom, that there are a lot of worse things out there than payday lending—and no one’s even sure why they believe that.”

In the typical payday-lending scenario, a customer borrows against his or her next paycheck by writing a postdated personal check to the lender for the loan amount plus a fee. If the borrower can’t repay the loan in full when it comes due—typically two weeks later—he or she may be forced to extend it, racking up additional fees. If the check bounces, the borrower faces bank overdraft fees as well. Critics say these costly loans frequently plunge already vulnerable Americans into a quicksand of debt.

A variation on CEEL’s lender-friendly theme has been part of an ad blitz blanketing the Washington, DC, Metro system. Presented as a quiz on the costliest option for dealing with an “unexpected cash need,” the ads state, “While a typical short-term payday loan or Western Union wire transfer for $100 costs around $15, and a credit card late fee is generally around $29, the fees and penalties for a bounced check often exceed $50.”

Glance at the ad in passing and it almost seems to make sense. But here’s the catch: If a consumer took out a two-week loan for $400 (closer to the state-by-state average) at the rate CEEL cites, the fee would be at least $60, and some payday lenders charge as much as $30 per every $100 borrowed. This scenario also conveniently skirts the fact that the average payday-loan user is not an “emergency borrower,” but a repeat one—taking out an average of nine loans per year, many of them back-to-back, according to CRL’s research.

Microsoft Word has updated its dictionary so it no longer suggests Osama as the correct spelling of Obama. But its latest version still has to catch up with current events:

That CEEL has been advertising in the nation’s capital (where payday lending has been effectively outlawed since 2007) may reflect a brewing federal fight. A pending bill sponsored by Rep. Luis Gutierrez (D-Ill.) would essentially preserve the status quo for payday lenders—a top source of his past campaign contributions. But another, championed by Sen. Dick Durbin (D-Ill.), would impose a 36 percent cap on interest rates. (Currently, many payday loans carry APRs of 391 percent or more.) In June, Durbin’s measure—killed once already by industry lobbyists—gained a powerful ally in Senate banking committee chairman Chris Dodd (D-Conn.), who signed on as a cosponsor.

CEEL—and Berman’s other groups—have already begun to lay the groundwork for their anti-regulatory case. Last May, in an op-ed published by the Christian Science Monitor, Tim Miller, Berman and Co.’s communications director—who doubles as a spokesman for Berman’s nonprofits— argued that “Americans don’t need their money managed by paternalist politicians.” In a letter published recently in the Wall Street Journal, Miller, writing on behalf of the Center for Consumer Freedom, insisted that it’s unfair to apply the standard APR model to short-term loans. “Is a hotel somehow ‘predatory’ if a $150-per-night room could cost $54,750 for an entire year?”

When I called CEEL to inquire about its payday advocacy, Miller answered. But when I asked when the group was founded, he seemed stumped. He promised that someone would call me back; soon afterward I got an email saying CEEL didn’t “feel confident in the objectivity of Mother Jones magazine, so we won’t be participating in your piece.” I guess that means no free T-shirt for me.