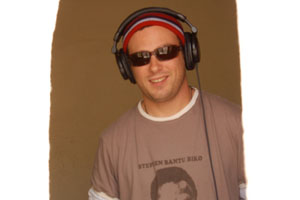 Back when Mark Johnson founded Playing for Change, the concept was simple: Unite the world through music. His first success story was a video featuring musicians from around the globe performing “Stand by Me,” the old feel-good hit by Ben E. King. It starts with a street guitarist in Santa Monica and proceeds around the world adding new musical layers as it goes. So far that video has received some 13 million hits on YouTube, and Johnson’s project has spawned a PBS documentary, CDs, a DVD, an upcoming concert tour, and a foundation to bring music to disadvantaged communities. I caught up with Johnson last week to talk about the monks that inspired him, his unusual mobile recording studio, and how he’s seen music change lives.

Mother Jones: In a nutshell, what is Playing for Change? What inspired it, and what are you trying to accomplish?

Mark Johnson: Playing for Change is a global movement using media, music, technology, and inspiration to try to unite as many people around the world as possible. The original idea came about 10 years ago. I was recording music at a New York City studio, and I was on my way to work one day, and I saw two monks painted all in white from head to toe. One was playing a nylon guitar and the other one was singing. I saw about 200 people stop, and everybody’s watching this performance. Some are crying and jaw-dropping and smiling, and I look around and see a collection of people who normally just run right by each other, and here they are coming together for this music. Then I got on the train and I went to the recording studio and I realized the best music I ever heard in my life was on the way to the studio, not in the studio. That’s when I realized great music, great art—they’re just moments in time. They exist everywhere, and we can use these moments in time to connect people and bring inspiration. And that led to the idea of traveling the world with a mobile recording studio and cameras, filming, recording, and interviewing musicians, and connecting them together with songs around the world, such as “Stand by Me” and “One Love.”

MJ: Can you think of groups of people who don’t usually get along, but in this particular setting you found that they did?

Johnson: Yes, as we traveled around the world, we found an amazing example of how music can help people persevere through struggles. For example, we were recording the Omagh Youth Community Choir in Omagh, Northern Ireland. This choir was formed in 1998 after a terrorist bombing in their town, and it was a town very divided between the Catholics and the Protestants. Separate schools, separate parts of town, separate communities. But any kids who wanted to be in the choir had to have their parents involved on the board, and this forced the parents to work towards something bigger than themselves, in this case the children. And now when you go to this town, you’ll see that the kids have sleepovers, the parents are best friends. It was divided for hundreds of years, and is now living in harmony. The process of creating this children’s choir has resulted in this amazing example of the power of music.

MJ: Were you surprised by how big a hit the “Stand By Me” video became?

Johnson: I was surprised at the power of the internet, but I wasn’t surprised that people were moved by it. Because as we were making it, it became something that seemed to be very important to people all over the world. And really we live in a time with so much division that I think people are really seeking out ways to be connected, ways to be inspired.

MJ: You seem to focus on street musicians without a lot of formal background or training. Why?

Johnson: I had to get back to the roots of the people, get back to the heartbeat of the people, starting on the streets where they play music and there’s no separation between them and an audience. In a studio you close the door; in concerts you have tickets and a stage. But on the streets somebody’s playing and somebody else can walk by and have a life-changing experience. And I also feel like we wanted to show people that great music is everywhere—it doesn’t matter if you’re famous or not. And maybe that can help us reevaluate what it means to be successful, because these people go out every day and they achieve their goal of playing music for people who walk by. And I think that’s important for everyone to see, that it’s really about the music, and it’s about the spirit, more so than about any kind of economic success.

MJ: How do you physically put a project together?

Johnson: “Stand by Me” started on the street in Santa Monica, California, where I live. I heard the voice of Roger Ridley on the street singing that song. So I approached him and I said “Hey, if I come back with some recording equipment and cameras, I’d love to film you and record you playing ‘Stand by Me,’ and then travel the world putting headphones on other musicians, and add them to the track.” So after we record Roger, we then went to the Zuni Indian reservation, put headphones on ten Indians around a drum in the desert. They listen to Roger, and then they play on top of that. And then next we go to New Orleans with Grandpa Elliott, he puts on headphones and he sings on the track with Roger and the Zuni Indians. And then next to a Zulu choir in South Africa, and so on, all the way around the world.

MJ: What kind of equipment do you have to use to make that possible?

Johnson: Technology has sort of grown in our favor over the years, but originally I put together a mobile recording studio powered with golf cart batteries, which was very heavy, and then switched to car batteries, which was a little bit better. But now I use little battery packs, small high-definition cameras, and a small crew so we can really go in and out of any location and try to be invisible.

MJ: This idea of inspiring togetherness through music is pretty earnest. Have you encountered any resistance?

Johnson: It’s funny, the potential resistance turned into actually something that gave us a lot of strength. For example, we were recording music in Soweto, South Africa, which for a long time had been the murder capital of the world. These two guys were watching us on the street, and I thought they were with our crew. So I walked over with an iPod video of where “Stand by Me” was at that time and I hand them some headphones, and they look at me funny. And they watched the performance and they got really excited, and they gave it back to me. And my friend came over and says, “Listen, those were the gangsters, and normally they would’ve robbed you or killed you and taken your iPod. But when they saw what you were doing, they told us to tell you they’ve got your back while you’re here, and you’re safe.” So I think that that kind of showed us that you know what, with the right intentions of trying to connect and inspire people everywhere, music will be our protection.

MJ: This started pretty small, and now it’s evolved into something much bigger. Where do you go from here?

Johnson: The beauty of this project is it never ends. We have more songs-around-the-world to make, we’re in the process of making more, as well as uniting all of these musicians together, and you mentioned the Playing for Change band. And then we’ve also started the Playing for Change Foundation, building music and art schools around the world. My brother, Greg Johnson, is in Tamale, Ghana, right now building our new music school. And then we install these schools with recording equipment and cameras so people can log in, watch recitals, watch interviews, and then try to take this level of inspiration to the next level. It’s really all about helping kids around the world and trying to leave the world better than we found it.