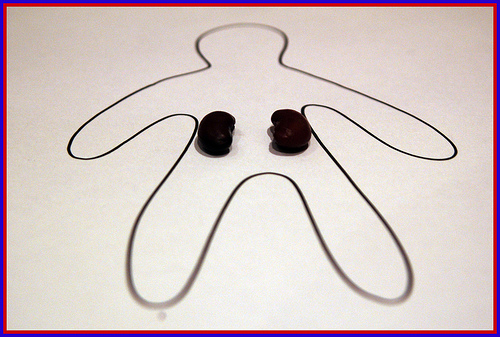 Boy, New Yorker web editor Blake Eskin must be chowing some humble pie right now. In case you were too caught up in last week’s beerplomacy to finish the magazine, allow me to explain: Every week, Eskin interviews one of the magazine’s mega-watt writers about a project of paramount importance. Then, just three short days after he posted a lengthy interview with Larissa MacFarquhar discussing her article about MatchingDonors.com, a sort of kidney-donor dating site, the feds up and busted one of the biggest organ-buying schemes in history right in the New Yorker‘s backyard.

The piece is a look at altruism through the lives of people who become living donors, giving their kidneys away to total strangers. A week ago, we might have called them selfless. Today we’d call them shmucks.

As Kevin Drum points out, there are some strong arguments on both ends of the kidney-for-compensation debate. In so much as you buy the pro-comp argument, “matchmaker” Rabbi Levy Izhack Rosenbaum and the 43 other people indicted on charges of brokering other people’s insides were just ahead of the curve. You know, legally.

As someone with chronically suboptimal kidney function and an incurable love of knockoff designer bags, I was disappointed. There’s an international kidney-selling racket running out of my old stomping grounds and all I got was this Chinatown purse? You might never think about the little fist-sized organs chilling out under your floating ribs—if you dropped one down the toilet tomorrow (don’t ask me how that would happen) you’d only really miss it for about 10 days until the other one beefed up and took over. I, on the other hand, have more pictures of my kidneys than you have of your children. And I’m lucky—mine still work. There are 80,000 Americans whose don’t, and I can’t imagine one who wouldn’t jump at the chance to buy a certified pre-owned replacement.

But the bigger disappointment is obviously for donor-matching advocates like my friend Jessica (who studied with Dr. Nancy Schlepper-Hughes, the UC Berkeley anthropologist who tipped the feds to Rosenbaum six years ago) and the thousands of people waiting for a life-saving donation that may never come. McFarquhar hoped her piece in the New Yorker would prod healthy kidney owners into action, as earlier stories had stirred the living donors she interviewed. And certainly the kidney scandal has thrust donation into the limelight. What’s clear, even for poor Larissa MacFarquhar, is that matchmaking is still trickier than it seems.