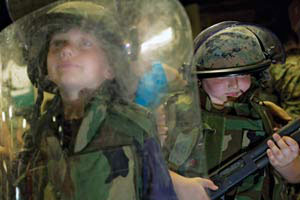 John Travers was striding purposefully into the Westfield mall in Wheaton, Maryland, for some back-to-school shopping before starting his junior year at Bowling Green State University. When I asked him whether he’d ever talked to a military recruiter, Travers, a 19-year-old African American with a buzz cut, a crisp white T-shirt, and a diamond stud in his left ear, smiled wryly. “To get to lunch in my high school, you had to pass recruiters,” he said. “It was overwhelming.” Then he added, “I thought the recruiters had too much information about me. They called me, but I never gave them my phone number.”

Nor did he give the recruiters his email address, Social Security number, or details about his ethnicity, shopping habits, or college plans. Yet they probably knew all that, too. In the past few years, the military has mounted a virtual invasion into the lives of young Americans. Using data mining, stealth websites, career tests, and sophisticated marketing software, the Pentagon is harvesting and analyzing information on everything from high school students’ GPAs and SAT scores to which video games they play. Before an Army recruiter even picks up the phone to call a prospect like Travers, the soldier may know more about the kid’s habits than do his own parents.

The military has long struggled to find more effective ways to reach potential enlistees; for every new GI it signed up last year, the Army spent $24,500 on recruitment. (In contrast, four-year colleges spend an average of $2,000 per incoming student.) Recruiters hit pay dirt in 2002, when then-Rep. (now Sen.) David Vitter (R-La.) slipped a provision into the No Child Left Behind Act that requires high schools to give recruiters the names and contact details of all juniors and seniors. Schools that fail to comply risk losing their NCLB funding. This little-known regulation effectively transformed President George W. Bush’s signature education bill into the most aggressive military recruitment tool since the draft. Students may sign an opt-out form—but not all school districts let them know about it.

Yet NCLB is just the tip of the data iceberg. In 2005, privacy advocates discovered that the Pentagon had spent the past two years quietly amassing records from Selective Service, state DMVs, and data brokers to create a database of tens of millions of young adults and teens, some as young as 15. The massive data-mining project is overseen by the Joint Advertising Market Research & Studies program, whose website has described the database, which now holds 34 million names, as “arguably the largest repository of 16-25-year-old youth data in the country.” The JAMRS database is in turn run by Equifax, the credit reporting giant.

Marc Rotenberg, head of the Electronic Privacy Information Center, says the Pentagon’s initial failure to disclose the collection of the information likely violated the Privacy Act. In 2007, the Pentagon settled a lawsuit (filed by the New York Civil Liberties Union) by agreeing to stop collecting the names and Social Security numbers of anyone younger than 17 and promising not to share its database records with other government agencies. Students may opt out of having their JAMRS database information sent to recruiters, but only 8,700 have invoked this obscure safeguard.

The Pentagon also spends about $600,000 a year on commercial data brokers, notably the Student Marketing Group and the American Student List, which boasts that it has records for 8 million high school students. Both companies have been accused of using deceptive practices to gather information: In 2002, New York’s attorney general sued SMG for telling high schools it was surveying students for scholarship and financial aid opportunities yet selling the info to telemarketers; the Federal Trade Commission charged ASL with similar tactics. Both companies eventually settled.

The Pentagon is also gathering data from unsuspecting Web surfers. This year, the Army spent $1.2 million on the website March2Success.com, which provides free standardized test-taking tips devised by prep firms such as Peterson’s, Kaplan, and Princeton Review. The only indications that the Army runs the site, which registers an average of 17,000 new users each month, are a tiny tagline and a small logo that links to the main recruitment website, GoArmy.com. Yet visitors’ contact information can be sent to recruiters unless they opt out, and students also have the option of having a recruiter monitor their practice test scores. Terry Backstrom, who runs March2Success.com for the US Army Recruiting Command at Fort Knox, insists that it is about “good will,” not recruiting. “We are providing a great service to schools that normally would cost them.”

Recruiters are also data mining the classroom. More than 12,000 high schools administer the Armed Services Vocational Aptitude Battery, a three-hour multiple-choice test originally created in 1968 to match conscripts with military assignments. Rebranded in the mid-1990s as the “ASVAB Career Exploration Program,” the test has a cheerful home page that makes no reference to its military applications, instead declaring that it “is designed to help students learn more about themselves and the world of work.” A student who takes the test is asked to divulge his or her Social Security number, GPA, ethnicity, and career interests—all of which is then logged into the JAMRS database. In 2008, more than 641,000 high school students took the ASVAB; 90 percent had their scores sent to recruiters. Tony Castillo of the Army’s Houston Recruiting Battalion says that ASVAB is “much more than a test to join the military. It is really a gift to public education.”

Concerns about the ASVAB’s links to recruiting have led to a nearly 20 percent decline in the number of test takers between 2003 and 2008. But the test is mandatory at approximately 1,000 high schools. Last February, three North Carolina students were sent to detention for refusing to take it. One, a junior named Dakota Ling, told the local paper, “I just really don’t want the military to have all the info it can on me.” Last year, the California Legislature barred schools from sending ASVAB results to military recruiters, though Gov. Arnold Schwarzenegger vetoed the bill. The Los Angeles and Washington, DC, school districts have tried to protect students’ information by releasing their scores only on request.

To put all its data to use, the military has enlisted the help of Nielsen Claritas, a research and marketing firm whose clients include BMW, AOL, and Starbucks. Last year, it rolled out a “custom segmentation” program that allows a recruiter armed with the address, age, race, and gender of a potential “lead” to call up a wealth of information about young people in the immediate area, including recreation and consumption patterns. The program even suggests pitches that might work while cold-calling teenagers. “It’s just a foot in the door for a recruiter to start a relevant conversation with a young person,” says Donna Dorminey of the US Army Center for Accessions Research.

Still, no amount of data slicing can fix the challenge of recruiting during wartime. Last year, a JAMRS survey identified recruiters’ single biggest obstacle: Only 5 percent of parents would recommend military service to their kids, a situation blamed on “a constant barrage of negative media coverage on the War in Iraq.” Not surprisingly, more and more kids are opting out of having their information shared with recruiters under No Child Left Behind; in New York City, the number of students opting out has doubled in the past five years, to 45,000 in 2008. At some schools, 90 percent of students have opted out. In 2007, JAMRS awarded a $50 million contract to Mullen Advertising to continue its marketing campaign to target “influencers” such as parents, coaches, and guidance counselors. The result: print ads that declare, “Your son wants to join the military. The question isn’t whether he’s prepared enough, but whether you are.”

Not far from the mall in Maryland, I asked 21-year-old Marcelo Salazar, who’d been a cadet in his high school’s Junior Reserve Officer Training Corps, why he’d decided not to enlist after graduating from John F. Kennedy High School in Silver Spring, Maryland, in 2005. Now a community college student, he replied that his mother was firmly against it.

Then, as if on cue, his cell phone chirped: It was a recruiter who called him constantly. He ignored it. “War is cool,” he said, flipping on his aviator sunglasses. “But if you’re dying, it’s not.”