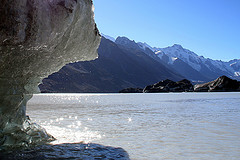 The California National Resources Agency released its Climate Adaptation Strategy on August 3, urging the state to prepare for the looming effects of global climate change. This comes on the heels of a (nearly) national movement in which two thirds of states enacted Climate Action Plans suggesting individual ways that states could mitigate the regional impacts of climate change.

California’s strategy is one of only seven adaptation-specific plans currently in the works.  But it highlights the transition from a widespread campaign to stop climate change to an effort to brace for the impacts that are nearly guaranteed within the next few decades. “It used to be that you’d get slapped in the face for talking about adaptation,” says Tony Brunello, the deputy secretary of climate change and energy for the CNRA. “It was seen as doing nothing and taking away from mitigation efforts.”

But that view changed once climate change became a hot button national issue, embraced as reality by scientists and most American politicians. Brunello notes that the adaptation strategy has not been bogged down by the usual reluctance toward adaptation becuase California has a reputation as a leader on climate change legislation. But, he says, “we are only playing with half a deck. People have to start paying attention the the effects that are already going to impact California.”

According to the Strategy, average temperature in California is expected to rise up to five degrees by 2050 (and twice that by 2100) while precipitation drops up to 35 percent. The report also predicts sea level to rise up to 18 inches by 2050 and 55 inches by 2100, which would submerge a significant portion of the state’s 800-mile coastline and cost an estimated $100 billion in damages. Proponents of adaptation argue that simply trying to slow climate change cannot avert the changes we are already beginning to see; we must prepare for these changes by fortifying the coastlines to minimize the damage of rising seas.

By bracing for the impacts of climate change, are we too quick to accept that we will be swallowed up by the ocean? Maybe, says Georgetown Law Climate Resource Center executive director Vicki Arroyo. “But even if you don’t believe in climate change, you better be ready for more water because that’s what will happen,” she says. Arroyo stresses that adaptation is rarely accepted as the sole solution to rising sea levels. “I don’t know of anyone who proposes that adaptation instead of mitigation [because] it’s really costly, not an exact science, and you know that it won’t really solve things in the end.”

Jim Metropulos, a senior advocate for Sierra Club California also proposes coordination between adaptation and mitigation. “We should do as much as we can where we know that we can reduce GHG [greenhouse gasses].” But, he continues, “we have to see the reality that climate change might be happening faster than we can mitigate for.”

For this reason, California’s strategy is careful to say that adaptation “must be a co-equal and integrated approach to avoiding climate extremes through reduction of GHG emissions (mitigation).” To achieve maximum success, adaptation and mitigation “policies must complement each other, and efforts within and across sectors must be coordinated.” Neglecting to coordinate, the report continues, could lead to unintended consequences that are favorable to adaptation but unfavorable to mitigation, or vice versa.

To many in the scientific community, this issue is a no-brainer. The earth is broken and we are not doing enough to fix it. So our best chance of survival might be to accept it and prepare to live in a world ravaged by climate change.