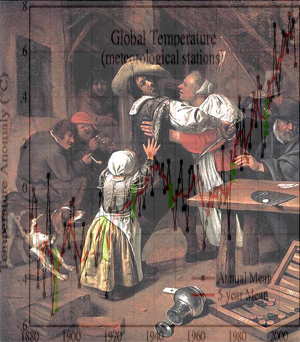 By Jan Steen, from Wikimedia

Nearly 25 years ago, a marriage counselor asked me a simple question. Four words, and it changed my life.

I had been in and out of this relationship for several years. First we hung out, then we hung it up. We lived together on a commune, we moved out and then moved apart. We saw others, we moved back in together. We separated, got married, then separated again. It was your typical troubled hippie relationship, circa 1970s.

Through all of it, there was a stew of anger simmering on a back burner. We had no idea what was fueling it, so we did the logical thing: we pretended it wasn’t there. Well, watched pots may never boil, but let me tell you, it’s the unwatched ones that seethe and roil out of sight, and, from time to time, explode. When they do, anyone nearby gets burned. There was never any actual violence, even verbal abuse, but the pain we inflicted on each other was real enough.

After one particularly bad scalding, we agreed to see a marriage counselor. Our first session started like a court hearing, with me as the prosecutor rattling off the charges against my then-wife. I was more like a cross between a prosecutor and an earnest shrink, actually. “Charge #1 [fill in the blank]; Why did she do that?” “Charge #2; I don’t understand why she did such a terrible thing!” Repeat for charges 3-12. Why? Why? WHY?!

Finally, I turned to the judge/marriage counselor and pleaded: “I don’t understand how she can say she loves me and still do these things that are so hurtful!”

The counselor had the quiet hand-wringing demeanor of Gabriel Byrne’s character, Paul Weston from In Treatment. He appeared to mull over my question and then sat upright in his chair.

“I’m not really interested in why she does those things,” he said, slowly. “What I want to know is: Why do you stay?”

Two days later I moved out. We got a divorce and that was that.

It’s the same with climate deniers. (Stay with me, here.)

Why do good, smart people like MJ’s own Kevin Drum continue to debate those who insist global warming isn’t caused primarily by human action? It’s not like the facts aren’t out there. This is settled science (as far as science can ever be considered settled). A list-serv of enviro-journo types to which I belong recently went through a small spasm along these same lines: “How can we best convince doubters that global warming is real?”

Once upon a time that was a legitimate question. No more.

Like the marriage counselor’s reaction to me digging into my former-wife’s motivations, I’ve lost interest in what motivates climate deniers. Religion? Politics? Money? I don’t know and I don’t care. The battle between those who accept global warming and those who don’t is like a really bad marriage where the two sides bicker endlessly over who’s right. This marriage cannot be saved. It’s time for a divorce.

Journalists and others need to turn our attention to solutions. Debating solutions to global warming is a sign of a healthy relationship. All sides have a common baseline and can help each other figure out where we need to go from here.

Politically, massive resources should be used to defeat everyone in Congress who still wants to debate the modern equivalent of “Is the earth really round?” We need to divorce pols who are divorced from reality, and the proper venue for that is the ballot box (or in some cases the recall petition).

And then, we need to get on with our lives, with creating solutions to the largest problem facing us: global warming

All I can say for sure is that it worked for me.

Once I stopped debating deniers I met this really wonderful energy source named solar power. We’ve been seeing each other pretty regularly for several months now.

Osha Gray Davidson covers solar energy for The Phoenix Sun, and is a contributing blogger for Mother Jones. He edited The Climate Bill: A Field Guide. For more of his stories, click here.