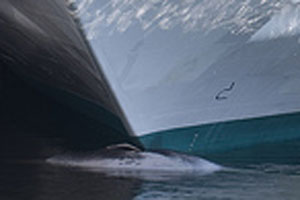 Photo used under a Creative Commons license by flickr user <a href="http://www.flickr.com/photos/eyesplash/">eyesplash Mikul</a>

I took notice back when David Foster Wallace chronicled the cultural dark side of going on a cruise. But ultimately it’s the environmental dark side of the industry that makes me know I’ll Never Do It at All.

Over the weekend, an adult fin whale—a threatened species in Canada—turned up dead in the waters at a cruise ship terminal in Vancouver. The rare marine giant was impaled on the bow of the “Sapphire Princess,” a Princess Cruises’ ship arriving from Alaska.

Tragic, gruesome and strange— the size of the ship really begins to sink in when you realize that the dead fin whale is approximately 70 feet long, a magnificent giant cruelly rendered small. (Photos here in the Vancouver Sun’s report, and more here on Flickr.) Consider, also, that soon the 2,670-passenger Sapphire Princess won’t even nearly measure up to the largest, most consumptive recreational beast riding the seas. That’ll be the stupefying Oasis of the Seas.

According to the Vancouver Sun, the Department of Fisheries and Oceans will conduct a necropsy to determine if the ship struck the fin whale while it was alive or if the whale had already been floating dead at sea and got caught on the bow. The latter seems the less likely scenario. A fisheries spokesperson, Lisa Spaven, appeared to acknowledge as much: “Vessel strikes are a very real threat to fin whales,” she told the Sun.

Moreover, an account I heard today from a source in Vancouver appears to contradict a statement put out by Princess Cruises this weekend regarding whales in the vicinity of the ship.

“It is unknown how or when this could have happened, as we have strict whale avoidance procedures in place when our ships are in the vicinity of marine life,” the statement from the cruise company said. “We are not aware that any whales were sighted as the ship sailed through the Inside Passage to Vancouver yesterday.”

But according to my source, two passengers who arrived on the Sapphire Princess in Vancouver this weekend said that several passengers on the ship had seen whales swimming around and under the ship as it traveled the Inside Passage cruise route just north of Vancouver Island.

Spaven, the DFO spokesperson, told the Vancouver Sun that she believes the whale was struck north of Vancouver Island, since fin whales aren’t normally found in the straits closer to Vancouver.

The Inside Passage is famously rich with marine wildlife and is a crucial habitat and migratory route for whales. As the Sun also reports: “This is the second time in the last 10 years that a cruise vessel has come into the Port of Vancouver with a whale caught on the bow. In that instance, in June of 1999, the Celebrity Cruise vessel MV Galaxy collided with an adult male fin whale, which likely happened as the ship transited the Hecate Strait north of Vancouver Island.”

For some compelling related reading, I strongly recommend Charles Siebert’s article “Watching Whales Watching Us,” published recently in the New York Times Magazine. It’s a deep, enthralling account that dives into some provocative thinking among marine biologists today about our evolving relationship with whales — which may yet hold hope, despite our terrible history of assault on one of the earth’s most sublime creatures.