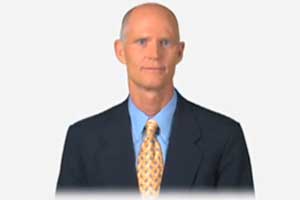 You’ve probably seen the ads. Ominous voice-overs warn you about how health care reform “could put a bureaucrat in charge of your medical decisions, not you.” A massive bulldozer with “government-run insurance plan” written on the side crushes your health care “choices.” Canadians and Britons relay horror stories of their experiences dealing with health care in those nightmarish socialist dystopias.

The ads are the product of a multimillion-dollar ad campaign designed to derail health care reform—especially what’s been dubbed the “public option,” which would set up a government-run plan to compete with private insurers. The man behind this ad blitz is the person who might be Public Option Enemy No. 1: one-time hospital executive and longtime Republican donor Richard Scott.

Back in March, Scott spent $5 million of his own money to set up a nonprofit called Conservatives for Patients’ Rights. The group aims to be the command center for the right’s fight against Democratic reform efforts. With the major interest groups—including hospital companies, pharmaceutical companies, and doctors—that have opposed reform in the past holding their fire this year in order to have a seat at the legislative table, Scott’s group has filled the anti-reform void. According to an estimate reported by the Associated Press, around $15 million has already been spent on ads favoring the Democrats’ plan, and  $4 million has been spent to oppose it. Much of that $4 million has come from Scott and CPR, and he’s claimed his group will spend as much as $20 million.

Not everyone thinks that’s real change.

“What Rick Scott is doing is talking about protecting the status quo, which is bankrupting businesses and bankrupting families,” says Peter Harbage, a fellow at the Center for American Progress, which supports the public option. With so many groups—from the hospital industry to the pharmaceutical industry to Wal-Mart—coming together in support of reform, “it’s disappointing that [Scott] doesn’t want to be a constructive part of the conversation,” Harbage says.

Scott certainly is an odd spokesman for the right’s health care agenda. The giant hospital company Scott led in the 1980s and 1990s, Columbia/HCA, was the subject of a seven-year federal investigation. The probe concluded with the company pleading guilty to 14 felony counts of criminal misconduct and paying $1.7 billion to settle civil charges relating to overbilling of state and federal governments—the largest settlement of its kind in American history. Scott, claiming ignorance of what was going on, was booted by his own board in 1997 and received a $10 million golden parachute with $300 million in stock options for his troubles.

Scott says that his critique of the public option is predicated on his detailed knowledge of the health care industry. But Stephen Meagher, a lawyer who handled some of the first suits against HCA, points out that Scott’s expertise is not a straightforward matter. “He says, ‘I was never accused of any wrongdoing,’ which is technically correct—but his company was accused of tremendous wrongdoing,” Meagher says. “He claims vast experience” in the health care field “but no knowledge of his own company.”

Scott doesn’t seem eager to remind visitors to CPR’s website of his past. Not surprisingly, the “Fast Facts about Richard L. Scott” section contains no mention of the HCA fraud scandal, though it does highlight the fact that HCA “became the world’s largest private health care provider” and was named “one of the 50 best performing companies of the S&P 500” by BusinessWeek. The bio does mention Scott’s current venture, a company called Solantic, which “provides urgent care services, immunizations and other services at 23 locations”—including some in Wal-Mart stores—”across Florida.” What it doesn’t explain is that Solantic makes a lot of its money by catering to the uninsured—giving Scott a direct financial interest in preventing the expansion of health insurance to all Americans.

Eric Burns, the president of liberal media watchdog Media Matters for America, says Scott’s advocacy is having an impact. “Scott is spending an enormous amount of money to influence the debate over health care reform. He’s essentially cornered the market on providing false and misleading information on the health care reform debate.” Some of Scott’s ads focus on nightmarish tales of government-run health care in places like Canada and Britain, but President Obama hasn’t proposed going to a Canadian-style single-payer system. And it is not just Media Matters that has criticized the ads—the Annenberg Center’s FactCheck.org also found the group’s ad “very misleading.”

To disseminate its message, CPR has hired the same public relations company that handled the Swift Boat Veterans for Truth. The firm, CRC Public Relations, did not respond to questions for Scott submitted by Mother Jones. But Burns says CPR’s ties to CRC are no coincidence. “CPR is essentially the conservative Swift Boat operation for the health care reform debate,” Burns says.

The media have certainly aided Scott’s efforts to dodge his history and his conflicts of interest. CNN and Fox News, among others, have interviewed Scott without questioning him about HCA or his new company’s dependence on the uninsured.

Jacki Schechner, a spokeswoman for Health Care for America Now, which supports the public option, says Scott is a “nuisance,” but not an obstacle. “He has a long and sordid history,” she says, adding that his past may actually help pro-public-option advocates. “For us he’s a great face of opposition because he’s such a shady guy.”

CPR talks up “competition,” but it’s opposed to forcing private insurers to compete with a government-run plan. That could be because government-run insurance in other countries has proven to be vastly cheaper and often better than the system of private insurance America relies on. In the US, there are efficiently run public health care plans: Medicare’s administrative costs are a fraction of those of the private plans, and Veterans Affairs provides some of the most effective health care in the world to a population that is older and sicker than the general public, Meagher argues. “It’s kind of difficult for me to believe someone who is so ideologically committed to competition and is at the same time worried about competition from a public program,” he says.

Scott may be fighting a losing battle. Most polls show that the public option is very popular, and this week Sen. Harry Reid, the majority leader, encouraged Sen. Max Baucus to stop seeking GOP votes on the health care legislation he’s writing and move forward with a bill with a public option. The writing’s on the wall, says Roger Hickey, the codirector of the Campaign for America’s Future.

“The public loves the idea that if we get reform, it’s not just going to be the Rick Scotts of the world that control the health care system,” Hickey says. “It turns out the public loves what he’s trying to vilify.”