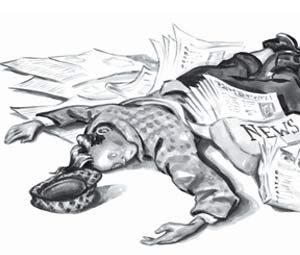 The New York Times is surveying print subscribers (hey, why not me?) to see if they would consider paying an additional $2.50 per month to get the NYT.com content that is currently free. Non print subscribers, the survey explains, would have to pay $5.

This is silly. To be clear, I believe the NYT has every right to charge online readers, if they think that’ll work. Journalism takes money.  Journalism is essential for a healthy democracy.  Journalists work hard and deserve to be paid adequately for the work that they do. Yes, yes, I know all about Judy Miller, and some journalists are in it for their own fame. But many got in, and stay in, for the public good. And most toil away with no fame and an unclear future on the horizon.

How bad is it? The Times is the country’s best paper, and likely to be the last one standing. Yet management there recently sent out a memo telling staffers to cut out texting, calling 411, and making international calls on staff cell phones and Blackberries. (God forbid we talk to someone in Iraq.) The Bloomberg story which broke the $5 paywall story notes that not only has print advertising all but vanished but online ad sales at the NYT and its sister papers are way down too, falling “8 percent and 3.5 percent in the first quarter and fourth quarter of 2008 respectively. They gained 6.5 percent last year.” So much for the theory that online ads will (eventually) save us all.

So yes, charge online. And charge me for my crack-er-mobile access. I’ll totally pay. But man alive, are you really saying that if I keep paying for the print edition—which I’m only doing to do my part to keep you afloat, which costs me @ $1,300 a year, which comes at great green guilt despite SF’s recycling program—you’ll only discount me a small latte’s worth of the price you charge everybody else?

According to the Bloomberg piece there are only 647,695 weekday home subscribers. That’s a scary low number; MoJo has a little more than a third as many print subscribers. Until the Times, or somebody, anybody, figures out a revenue model to ensure reporting’s survival, I’ll pony up and pay the $1,300 and the damn $2.50 (x12=$30). But I wouldn’t count on most home subscribers to follow suit.

But perhaps the Times scheme will help do the messaging that journalists have been for too long too reticent to do. That we are what stands between you and governmental and corporate corruption. That following decades of deregulation, our watchdog powers are more in need than ever. That sustained beat reporting can’t be done by people in their spare time. That lovely features and beautiful photo essays and book and movie reviews and all the rest great journalistic institutions offer is what makes for a great Sunday morning and a bareable subway ride. And that the Daily Show or NPR or CNN or Rachel Maddow can’t do their job unless scores of other reporters do theirs. And that reporting takes money, dammit!

How can you support the reporting that Mother Jones does? You can subscribe, a bargin at a mere $15. Don’t like dead trees? Take heart in the fact that our paper is 90% recycled or get the digital edition. You can also help us by signing up to our newsletters. There’s a tipjar at the end of every story and blog post. You can give to our investigative fund, or our intern program in which we train the next generation of investigative journalists. Learn more here.

Clara Jeffery is Co-editor of Mother Jones. Read more of her stories here. And follow her on Twitter here.