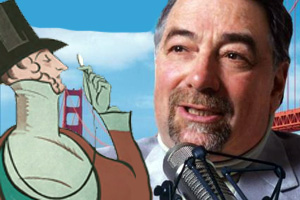 Kelefa Sanneh’s profile of right-wing radio talker Michael Savage in this week’s New Yorker is insightful in many respects. Most notable is its appreciation that Savage is an extremely idiosyncratic guy, and that it’s his personal hang-ups that fuel his daily program, The Savage Nation, as much or even more than his political leanings. The 67-year-old Savage is, Sanneh observes, “a marvellous storyteller, a quirky thinker, and an incorrigible free-associator. He sometimes sounds less like a political commentator than like the star of a riveting and unusually vivid one-man play.” All true, and it’s part of why his show draws in fans and foes alike.

Yet in Sanneh’s account, Savage comes off as the crotchety old uncle of the conservative radio world, an amusingly apoplectic, ultimately harmless crank. That’s too bad, because as one of the few mainstream journalists to get access to Savage’s inner sanctum (i.e., his seaside home in tony Tiburon, California), Sanneh had a unique opportunity to reconcile Savage’s showmanship and charisma with his toxic political rhetoric, which runs the gamut from raw homophobia to annihilationist fantasies about illegal immigrants and Muslims. Instead of taking Savage at his word, Sanneh went soft on him.

Like Sanneh, I find Savage (née Michael Alan Weiner) a fascinating character. A few years ago, I spent many hours listening to his enraging yet oddly engaging show while writing an article about his unusual path from a free-spirited herbalist and Beatnik wanna-be to angry white man. I also caught one of his rare public appearances in 2003, where he spoke of indiscriminately bombing the Middle East: “Wipe the women out with them! Because it’s our women who got killed on 9/11! And it’s our women who are gonna get killed tomorrow unless we get rid of the bugs who are destroying us!” Considering that 8 million people listen to this kind of vitriol, I don’t find it so easy to dismiss Savage simply as the Bay Area’s answer to Howard Stern. Savage is not, as Sanneh insists, an irrepressible conservative “heretic” flying in the face of the Limbaughs and Becks. Sure, he may play heavy-metal interludes and riff about his fear of death and his traumatic childhood, but he’s still one of the loudest voices propagating the increasingly unhinged line that America’s been taken over by a foreign-born, Al Qaeda-coddling, whitey-hating Marxist and his traitorous liberal followers. Whether Savage’s show is ultimately a schtick or an act of slo-mo catharsis doesn’t make it any less disturbing.

Sanneh also relates a story that puts Savage on the frontlines of the early 1980s AIDS crisis in San Francisco, working as a nutritionist at a clinic serving gay men. When Savage concludes that shutting down gay bathhouses might slow the spread of the mysterious disease that’s infecting his clients, “the whole community that I knew turned on me.” The anecdote portrays Savage sympathetically, suggesting that the angry response to his stand on this contentious public-health issue turned him against what he described in his 1986 book Maximum Immunity as “the homosexual lobby.” Again, Sanneh misjudges the depth of Savage’s animosity toward gays. In the same book, Savage wrote that gays should “accept the blame” for AIDS and concluded, “Those who practice orgiastic sex, with many partners, and use street drugs are not likely to respond to reason.” Get AIDS and die, you pleasure-seekers (who just happen to be gay).

Those are just a couple of oversights that contribute to the portrait of Savage as a curmudgeon rather than an extremist. There are plenty of other areas Sanneh might have explored to add a critical edge to the article, from Savage’s brief foray into confessional fiction (“I am filled with fears, nearly all the time feeling I am about to become totally insane.”) to his friviolous lawsuits against his perceived enemies and detractors. And what about his do-little nonprofit, the Paul Revere Society, which the IRS shut down in 2006, leaving $900,000 on its books without a full accounting of where it went? Savage is nothing if not a rich subject, and Sanneh deserves kudos for teasing out so many threads of his tangled personality/persona. But he shouldn’t have tried so hard to prove that his subject doesn’t live up to his stage name.