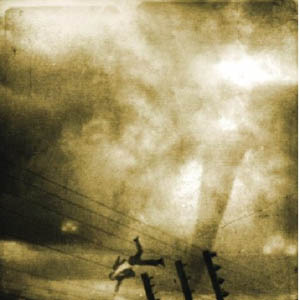 The pAper chAse
Someday This Could All Be Yours Vol. 1
(Kill Rock Stars, 2009)

Did you hear that Marilyn Manson put out a new record? Guess what? Nobody cares. That shtick isn’t scary anymore. No one is shocked by a pale dude named Brian from Florida who calls himself Antichrist Superstar. With the world falling apart around us, all we have to do is turn on the news to get a little freaked out.

In contrast with His Freakiness, the Dallas, Texas-based quartet known as the pAper chAse takes its cues from things that actually scare people, and to each song title on this sixth release appends a mildly unsettling parenthetical, such as, “What Should We Do With Your Body (The Lightning).” These guys don’t exactly break new sonic ground on this album—then again, when you specialize in highly unique nightmare soundtracks, reinventing yourself probably isn’t a top priority.

The group’s sound is dark, but not goth. Abrasive, but not punk. Not pop, but surprisingly…catchy? The rhythm section is massive here, creating spine-jerking grooves, with songs that shudder and shake as singer John Congleton—best known for his production work for acts like Explosions in the Sky and the Polyphonic Spree—wails over the cacophony like a soapbox preacher: I’ll have you pictured in my head / All of you butchered in your beds / ‘Cause God is everywhere / God is everywhere. (All this while wringing damaged notes from the neck of his guitar.)
My least favorite track is “The Common Cold (The Epidemic),” whose weird circus vibe makes it feel out of place. That one aside, Someday This Could All Be Yours Vol. 1 is a solid addition to the band’s growing discography. This music is definitely not for everyone, but if it strikes a chord with you, you should check out the band’s earlier stuff, too (Hide the Kitchen Knives being my personal favorite). As the title indicates, Someday is the first part of a double album. With the economy what it is, I suppose you can’t blame an artist for releasing a CD in two parts. Besides, it gives you the time you’ll need to fully digest these songs.